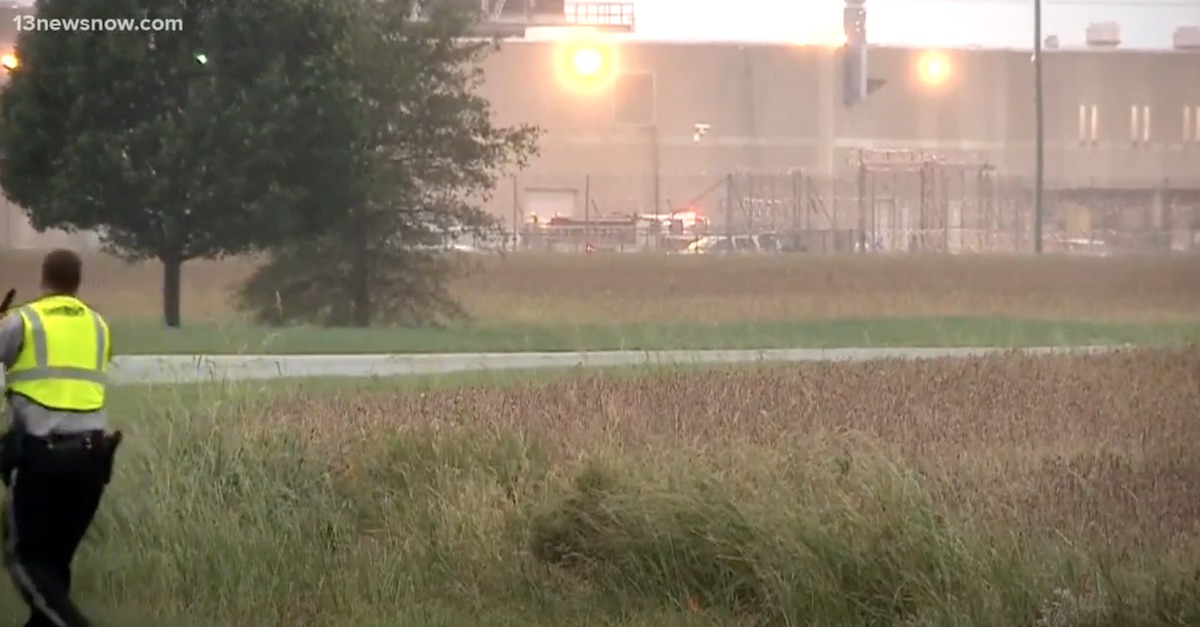 A completely innocent female visitor at a federal prison in Virginia was forced to take her tampon out of her vagina by prison guards–who then inspected the used menstrual product before throwing it away. A federal appeals court on Thursday signed off on the search by affirming that the incident did not violate the Fourth Amendment and extending a lower court’s grant of qualified immunity.

The shocking 2016 incident is noted multiple times in a relatively brief ruling by the U.S. Court of Appeals for the Fourth Circuit.

[Angela] Calloway was escorted to a private office by two female officers, Sgt. Heidi Brown and Officer Heather Hale, who were told that Calloway had signed the strip-search consent form. When they reached the private office, Calloway informed the officers that she was menstruating, and so the three women relocated to a women’s restroom. Because the door to that restroom did not lock, Brown told Hale to stand at the door to ensure that no one entered. Brown explained the search procedure to Calloway and then had her remove her clothing one piece at a time, with each item being searched before another was removed. When Calloway had taken off all her clothes, she complied with Brown’s directions to lift her arms and breasts, open her mouth, and lean over and shake her hair. At Brown’s direction, Calloway next went into the bathroom stall and removed her tampon, which Brown inspected before disposing of it.

“Calloway then twice performed the ‘squat and cough’ maneuver, and, according to Calloway, she also spread her buttocks for the officers’ inspection,” the opinion continues. “When the search revealed no contraband, Calloway’s clothing was returned. She was also offered another tampon but stated that she did not need one.”

Calloway sued various authorities for Civil Rights violations “under color of law” via 42. U.S.C. §1983. The appellate court discounted her version of the story–prioritizing the guards’ take–and dismissed that lawsuit on summary judgment.

To hear the prison guards tell it, Calloway had evidenced some behavior that suggested she might have contraband while visiting federal inmate Travis Talbert–whom Calloway had previously been cleared to visit by the prison after passing a background check.

Barack Obama-appointed Circuit Judge James A. Wynn noted in a fiery dissent nearly three times as long as the majority opinion, however, that the impressions of multiple prison guards at various times were combined in order to justify probable cause for the search.

This ex post facto aggregation and the timeline of the events, Wynn notes, is key to understanding what actually transpired because Sergeant Benjamin Lokey and Unit Manager Jeffrey Brown were the commanding officers who actually initiated the “intrusive search.”

Here’s how Wynn described the search:

The officers accused Ms. Calloway of smuggling contraband, and they told her they had justification to “strip search” her. Two additional officers arrived and took Ms. Calloway into a bathroom, where one officer stood in front of the door and the other told Ms. Calloway to take off her clothing one article at a time. After Ms. Calloway completely undressed, the officers ordered her to twice squat and cough forcefully and to spread her buttocks for inspection of her anus. The officers also had Ms. Calloway remove her tampon from her vagina and give it to an officer. As it turned out, Ms. Calloway was completely innocent of the accusation—the officers found no contraband whatsoever.

“[T]he majority opinion aggregates the knowledge of all officers involved in the search of Ms. Calloway—no matter how tangentially—without regard to what information was actually known at the time by the decision-making officers, Lokey and Jeffrey Brown,” Wynn writes. “This is error. This Circuit does not permit the ‘knowledge of several officers [to] be aggregated to create probable cause’ or reasonable suspicion.”

“Nevertheless, the majority opinion relies upon information unknown to those officers at the time of the decision,” the dissent goes on.

[I]n his deposition, Lokey stated that no one told him, prior to the search, that Ms. Calloway had been acting nervously. Nonetheless, the majority opinion recounts that Heidi Brown “later recalled that [Ms.] Calloway ‘looked a little frazzled and kind of nervous,’” and finds that [Master Control Officer Jeremy] Nelson [who was watching the Calloway-Talbert visit via a “choppy video” feed, according to the majority opinion] “thought that ‘[Ms.] Calloway appeared to be nervous.’” Similarly, although the majority opinion reports that “Nelson also thought that ‘Talbert seemed to be keeping an eye on the correctional officers as they made their rounds’ through the visitation room,” nothing in the record suggests that Nelson’s observation was communicated to Lokey or Jeffrey Brown.

Significantly, Nelson and Heidi Brown’s uncommunicated observations are irrelevant to the analysis of whether Lokey and Jeffrey Brown had reasonable suspicion to justify the intrusive body search. By including these irrelevant details, the majority opinion fails to “disregard information not known to” Lokey and Jeffrey Brown at the time they decided to conduct an intrusive search of Ms. Calloway’s body.

All Nelson actually told Lokey and Brown at the time of the search was that he thought Calloway “reached inside the front of her pants” on or around where a button would be.

Wynn derides this justification in a footnote:

[A]s it appears in the video in the record, Ms. Calloway’s adjustment of her clothing—described by Nelson as “reach[ing] inside the front of her pants”—was innocuous and commonplace. Even compared to other conduct in the visitation room, it would be difficult to know that Ms. Calloway’s actions would rouse officers’ suspicion. For example, the video of the visitation room shows another visitor repeatedly placing his or her hands under the visitor’s shirt. Although Nelson described that conduct as “inappropriate” in his deposition, the video does not show that officers escorted that visitor out of the room or that officers suspected that visitor of smuggling contraband.

Moreover, the dissent argues in unusually accusatory terms, that the majority opinion takes everything the prison guards said at face value while discounting Calloway’s version of the story. This alleged error by the majority would equate to a violation of the Federal Rules of Civil Procedure because summary judgment motions must assess the facts in the light most favorable to the non-moving party; that is, to the party who wants the case to actually go to trial here, Calloway.

The district court found that “Nelson had a history of successfully identifying suspicious behavior that led to the interception of contraband.” The majority echoes this naked characterization, concluding Nelson’s report “was especially meaningful to Lokey in light of [Lokey’s] knowledge that ‘Nelson [had] been very successful in the past [in] identifying suspicious actions [that] [had] led to the interception of drugs or other contraband.’”

“[T]hat characterization of the record improperly accepts Lokey’s perception as accurate and draws an inference against Ms. Calloway,” Wynn concludes [emphasis in original].

The dissent also argues that the timeline doesn’t quite add up.

“Evidence in the record shows that Lokey and Jeffrey Brown had already decided they had reasonable suspicion to conduct an intrusive search of Ms. Calloway’s body before they removed her from the visitation room,” Wynn writes. “[T]he report documenting the search completed by Heidi Brown indicates a time of 1:50 p.m., more than five minutes prior to the time the video in the record shows officers entering the visitation room to remove Ms. Calloway. Ms. Calloway’s signature on the Consent for Strip or Body Cavity Search form indicates a time of 2:04 p.m. In her deposition, Heidi Brown indicated she thought she may have been summoned to perform the search before Ms. Calloway signed the consent form. That follows from the fact that her report bears a time stamp before the search and before the consent form was signed.”

“[V]iewing the evidence in a light most favorable to Ms. Calloway shows that the officers’ lacked justification for initiating the search,” Wynn concludes.

Wynn goes on to excoriate his colleagues on the bench:

In short, the majority opinion, through subjective word choice and selective inclusion of information, paints the record not in the light most favorable to Ms. Calloway, the non-moving party, but rather to the officers. That runs counter to the most fundamental principles of summary judgment analysis because deciding whose account of events is more believable is not our task. Nor is our task to scour the record for details that legitimize, after the fact, the officers’ decisions. Instead, our task on review of summary judgment is only to decide whether, viewing the record in the light most favorable to Ms. Calloway and drawing reasonable inferences in her favor, a reasonable jury could conclude Lokey and Jeffrey Brown lacked individualized, particularized information about Ms. Calloway to support a reasonable suspicion…I believe a reasonable jury could.

“In addition to failing to apply key summary judgment principles, the majority opinion turns away from the promise of 42 U.S.C. § 1983’s remedial purpose and profound historical impact,” the dissent intones. “The historical context of 42 U.S.C. § 1983 illustrates its purpose and significance. But here, by focusing on the governmental officers in this case—framing the issue as being about the officers instead of constitutional rights, improperly weighing the officers’ accounts over the plaintiff’s testimony, and including supporting information unknown to the officers at the time of the alleged violation—the majority opinion betrays the promise of this historically significant statute.”