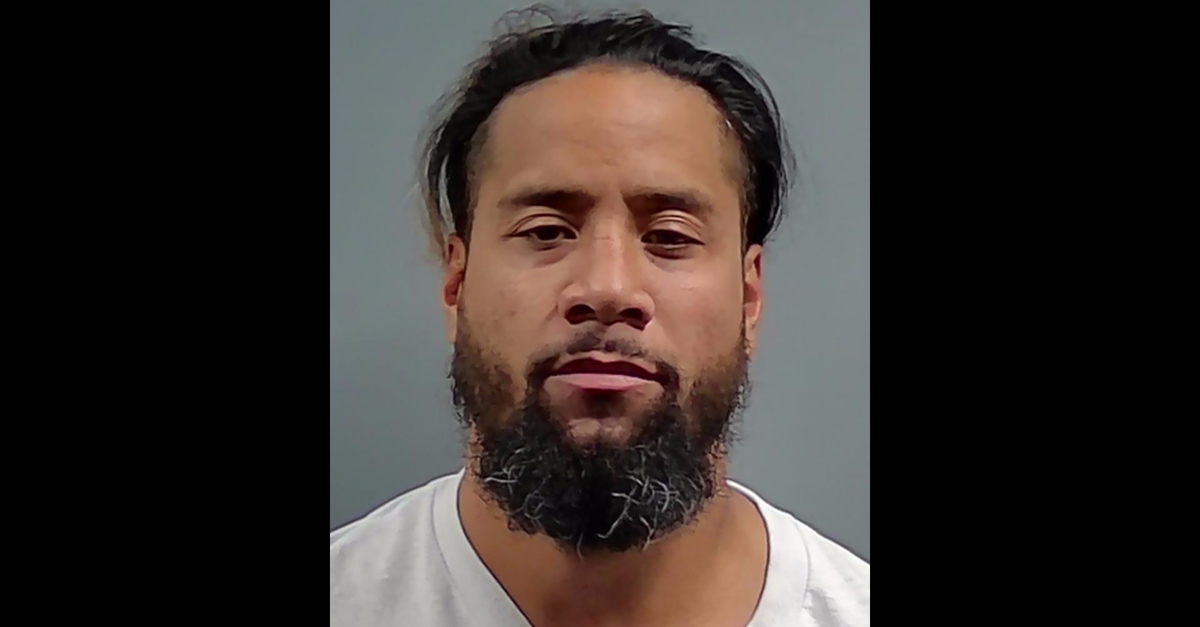 Professional wrestler Jonathan Fatu, better known by his WWE ring name Jimmy Uso, clocked in at more than double the legal blood alcohol limit, according to police in Pensacola, Florida. Fatu had been gunning his white Dodge Charger at 50 mph in a 35 mph zone and ran through a red light on Monday night, according to his arrest report and a police spokesman.

This is not Fatu’s first such arrest, even in this city. Fatu was arrested in Pensacola for a DUI in July 2019 and was acquitted of that charge in a jury trial, though he was still on the hook for a speeding ticket. Escambia County Deputy Jeremy Meek testified that Fatu was impaired, according to WEAR-TV at the time. For example, the wrestler was having a hard time opening the door handle and appeared to stumble. But Fatu reportedly did not take a field sobriety test and asked for his attorney.

Pensacola police describe a different sequence of events on Monday night. Fatu, who was swaying after exiting his vehicle, admitted to police that he had “multiple beers,” in the words of the arrest report obtained by Law&Crime. During the field sobriety test, he had trouble doing the “walk and turn,” and could not maintain balance during the one-legged stand, putting down his foot multiple times, police said. The officer claimed to have smelled a strong order of an alcoholic beverage after pulling over Fatu.

According to cops, Fatu was asked to submit to a breathalyzer test. He refused to answer, and “implied consent was read,” police said. Under Florida law, “implied consent” means that anyone who drives through the state is considered to have consented to chemical and physical tests. These tests much be “incidental” to an arrest and at the behest of an officer having “reasonable cause” the driver was intoxicated. From the statute:

Any person who accepts the privilege extended by the laws of this state of operating a motor vehicle within this state is, by so operating such vehicle, deemed to have given his or her consent to submit to an approved chemical test or physical test including, but not limited to, an infrared light test of his or her breath for the purpose of determining the alcoholic content of his or her blood or breath if the person is lawfully arrested for any offense allegedly committed while the person was driving or was in actual physical control of a motor vehicle while under the influence of alcoholic beverages.

Fatu allegedly took the breathalyzer tests back at the police department, returning results of .202 and .205. That is more than 2.5 times the legal limit of .08.

The arresting officer in this matter said he pulled over Fatu after seeing him going 50 mph and running a red light.

It is unclear if he has a lawyer in this matter. His attorney in the 2019 trial did not immediately return a Law&Crime request for comment. Fatu posted a $500 bond Tuesday morning, online records show.

Read his arrest report below: