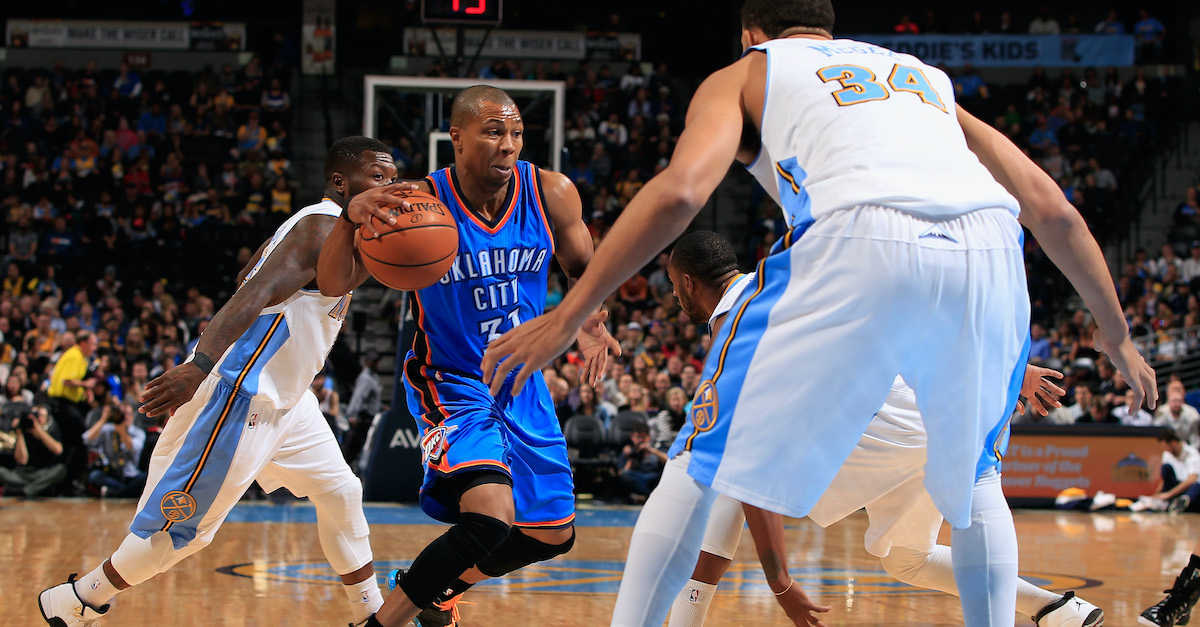 Sebastian Telfair, sporting a #31 jersey for the Oklahoma City Thunder, controls the ball against the Denver Nuggets at Pepsi Center on Nov. 19, 2014 in Denver, Colorado.

The sister of former NBA player Sebastian Telfair pleaded guilty on Friday to a federal charge of interstate threats against a witness in the criminal trial in Brooklyn that ultimately sent her brother to three and a half years in state prison.

Telfair’s meteoric rise to professional basketball player, straight from high school to the NBA, was disrupted in 2017, when authorities reported finding a cache of firearms and ammunition in his vehicle in New York. He was  found guilty some two years later of second degree criminal possession of a weapon.

The just-unsealed criminal complaint against his sister Octavia Telfair was secretly filed May 7, 2019, shortly after her now-admitted threats to the witness against his brother.

On April 24, 2019, a little more than a week after the Oklahoma City Thunder star’s conviction, Octavia Telfair allegedly dialed up on woman identified in court papers only as Jane Doe twice. The woman, who testified against her brother, had known the sister for 15 years and recorded both threats, prosecutors say.

During this call, the sister also said that the woman was “going to sit there with him,” allegedly referring to prison with her brother and that she would find out where she lived and that her mother, aunt and sister were all “food” and that Telfair would “kill all of y’all bitches.”

Prosecutors say that Ms. Telfair had a calmer tone on the second recorded call, but the message was no less chilling.

Ms. Telfair allegedly told the woman that she was “on a mission” and would “waste all [her] energy and time” on “getting next to” her.

The woman’s minor son also received a phone call from a number listed “No Caller ID,” which the woman told authorities that she picked up and recognized as Ms. Telfair.

As recounted by the New York Daily News, the basketball player’s sentencing was also an emotional affair. Mr. Telfair pleaded for leniency from a judge for what he portrayed as a victimless crime, and the tabloids captured his animated claims of innocence.

“Please don’t take me from the society right now,” Telfair reportedly told a judge in 2017. “I’m 34. I can go play in China for another six years, take care of my family.”

“The mandatory prison sentence he received today is required by law and he has now been held accountable for the unlawful conduct,” Gonzalez said four years ago.

The U.S. Attorney’s office for the Eastern District of New York declined to comment.

As part of her plea deal with prosecutors, Ms. Telfair has agreed not to appeal a sentence of 16 months or lower, and the government’s guidelines range starts off at 10 months. The offense carries a maximum five-year term under the charged statute. Her agreement was signed on March 4.