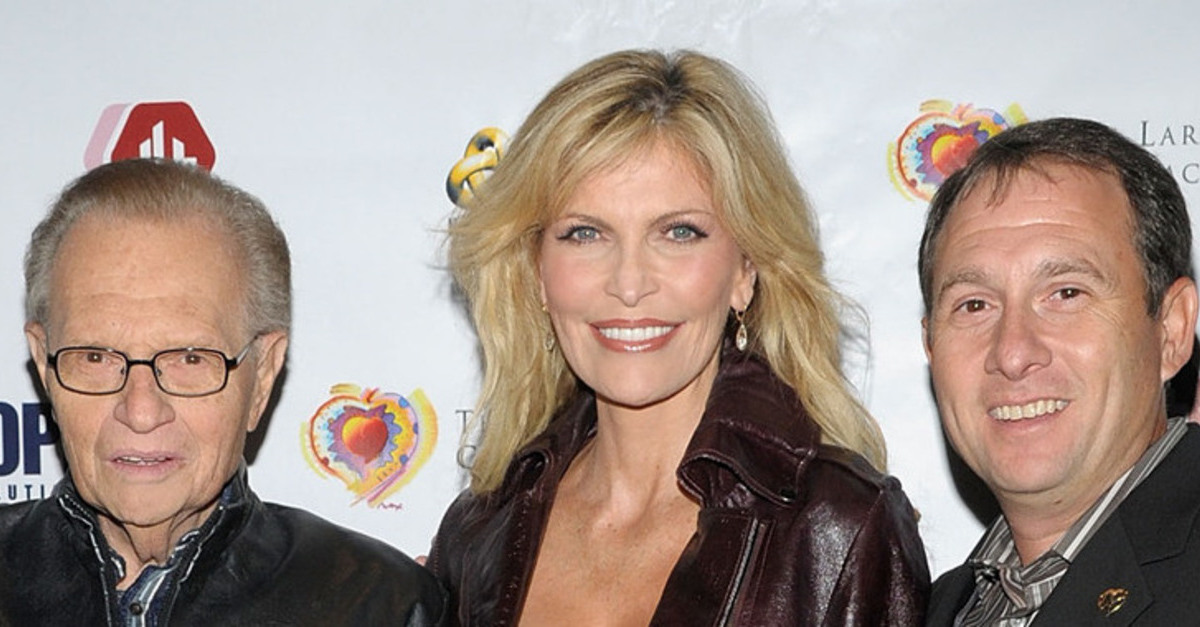 Broadcaster Larry King with his wife Shawn, son Larry King Jr. at the “Heart & Soul: An Evening of High Comedy and Low Cholesterol” benefit for the Larry King Cardiac Foundation at BOA Steakhouse on November 7, 2009 in West Hollywood, California.

Legendary media figure Larry King died on January 23, 2021, leaving behind millions for inheritance and one colossal legal battle over his last will and testament.

Here are the facts about King’s life and death— at least those about which everyone agrees.

This is my Last Will & Testament. It should replace all previous writings. In the event of my death, any day after the above date I want 100% of my funds to be divided equally among my children Andy, Chaia, Lary Jr Chance & Cannon.

Two of King’s children, Chaia King, 51 and Andy King, 65, passed away before their father’s death, and within a month of each other in 2020.

King and his seventh wife, Shawn Southwick King, were married for 22 years, but had been contemplating divorce in recent years. In August 2019, Larry King filed for divorce; Larry King also agreed that he would pay $33,000 per month in interim spousal support to Shawn King while the couple awaited their divorce hearing on April 29, 2021.

King’s estate is estimated at around $2 million.

King’s son and widow are now battling over who is in charge of the estate.

Shawn King says Larry King had a formal will in 2015, which names her the executor of the estate. She says the handwritten note is just an “ineffective codicil” with no legal significance.

Note: There is no practical difference between an executor and an administrator of an estate. We use the term “executor” when the deceased person named the individual via will, but the term “administrator” when the individual is formally appointed by a court. Regardless of title, the person has the same duties, which include collection and distribution of estate assets, and payment of estate debts and taxes. Being an executor/administrator neither ensures nor prohibits that the person inherit under the will. Sometimes, an executor/administrator is entitled to a small fee for services related to estate administration.

Larry King Jr. argues that he is the correct administrator, because Shawn and Larry King were involved in a pending divorce proceeding at the time of his father’s death.

Shawn King claims that she and Larry were not truly headed toward divorce, that Larry had been uncooperative with divorce proceedings, and that the two were still on good terms. She argues that she has a clear understanding of her late husband’s business dealings, while Larry King Jr. “has never been involved in Larry’s career or business, and it would be highly inappropriate to place him in a position of representing Larry’s estate.”

She also objects to Larry King Jr. acting as administrator on the grounds of conflict of interest. According to Shawn King, Larry King Jr. owes a debt to his late father’s estate for $266,261; she claims the debt originated from a payment of the father’s “secret account” to his son.

Does the handwritten letter count as a will?

There appears to be a strong case in favor of recognizing King’s handwritten letter as a legal will.

California does recognize “holographic” (or informal) wills, though not every scrawl about a person’s wishes after death counts as one. Under California Probate Code §6111, King’s writing will be deemed a valid holographic will only if 1) its material provisions appear in King’s handwriting; 2) when he signed it, he had the intent to make a will.

Photos of King’s letter do appear to be in his handwriting, and Shawn King does not allege the document is a fake or forgery. 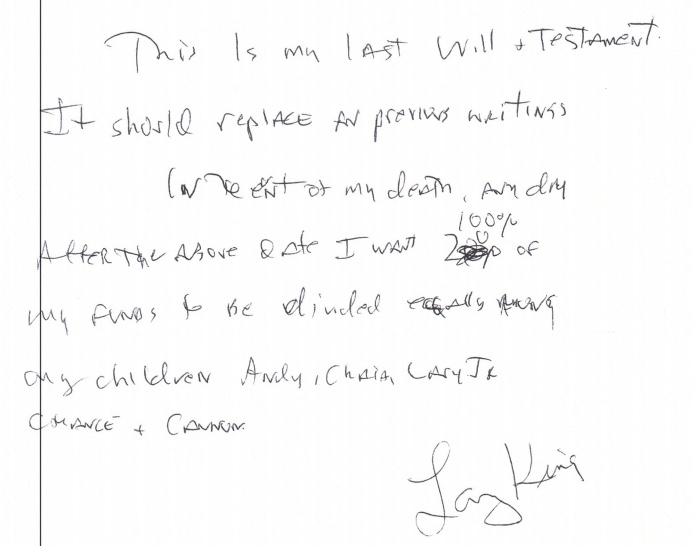 The issue of intent is somewhat more complex. Under the law, King must have signed the document intending that it would constitute the terms of his will (as opposed, for example, to a mere document containing directions on how to handle a separate more formalized will).

Again, the rather unambiguous wording in the handwritten note seems to indicate that King intended the document to be a will. Generally, the requirement known as “testamentary intent” doesn’t demand very much: just that the person making a will understands what they are doing and intends to bequeath property through the document they’ve signed.

Shawn King’s argument centers on her late husband’s state of mind. In pleadings, Shawn King argued that in the last few years of Larry King’s life, King was “highly susceptible to outside influences” and “of questionable mental capacity.” Further, when he drafted the handwritten note, he had been “possibly already under the influence of pre-operative medication” following a stroke.

This argument could relate to intent necessary for holographic wills — or could relate more broadly to an “undue influence” claim, which would be relevant to any will, holographic or otherwise. Certainly, if Larry King had been so addled by medication or mental condition as to not understand that he’d been bequeathing property, his note would not constitute a legally operative holographic will. Alternatively, if King had known what he was doing, but was making his decisions because he was pressured or threatened to do so, the holographic will could be invalidated on that basis.

What would Shawn King need to prove to have the handwritten will thrown out on the basis of undue influence?

California Welfare and Institutions Code § 15610.70 defines undue influence generally as “excessive persuasion that causes another person to act or refrain from acting by overcoming that person’s free will and results in inequity.” In other words, if Larry King had been “excessively persuaded” by his children (or perhaps someone else) to write the note, it could be thrown out on that basis.

What happens if the handwritten note is thrown out?

If Shawn King succeeds in invalidating the handwritten note as a holographic will, the controlling document would be King’s most recent will. If that is, indeed, the 2015 will and it names Shawn King as executor, the court would likely honor that direction. In the event that the 2015 will is ruled the controlling document, any bequests would be made in accordance with the document’s terms.

If it is the handwritten note ruled to be the controlling will for Larry King’s estate, Larry King Jr. might be made administrator of his father’s estate. The note does not specify an executor, which means that the court could name Larry King Jr. as administrator or could choose a different person entirely. Whoever is tasked with estate administration would be in the position of calling in any debt owed by Larry King Jr. (or any other debtors). Irrespective of whether Larry King Jr. is named administrator, he would almost certainly be entitled to inherit as a beneficiary under the terms of the holographic will.

How much could Larry King Jr. inherit under the will?

Because two of Larry King’s children predeceased him, there is also be a question as to whether their share of their father’s estate would be distributed to their children (a process known as “per stirpes“) or whether their share would go to Larry King’s surviving heirs (known as “per capita“). Because King’s note was silent about this particular matter, the court would likely rule to distribute King’s estate per stirpes, thereby including the children of Chaia and Andy King.

Is there any way for Shawn King to inherit anything?

Yes, but there are several different possibilities as to what amount she would inherit.

California estate law allows for an “elective share” —  in which a surviving spouse has a legal right to inherit one-half of any community property. In other words, if Shawn and Larry shared any community property, she would be entitled to half of it, even though Larry may have instructed that “100% of [his] funds”be distributed to his children. Furthermore, any pre- or post-nuptial agreements between Larry and Shawn would further clarify her entitlement to any elective share.

If any will is deemed valid, and that will bequeaths less than the elective share to Shawn, she could make a claim against the will. By doing so, her elective share would be distributed to her, and the other beneficiaries’ inheritances would be reduced proportionally.

On the other hand, if no will of any kind is found to control, “intestacy laws” would determine who inherits. Under these laws, Shawn would be entitled to a larger portion of community property as well as some of Larry King’s individual property.