As Defense Fumes at Focus on Scientology, Prosecutor Calls That ’70s Show Star Danny Masterson ‘a Rapist’ During Closing Arguments 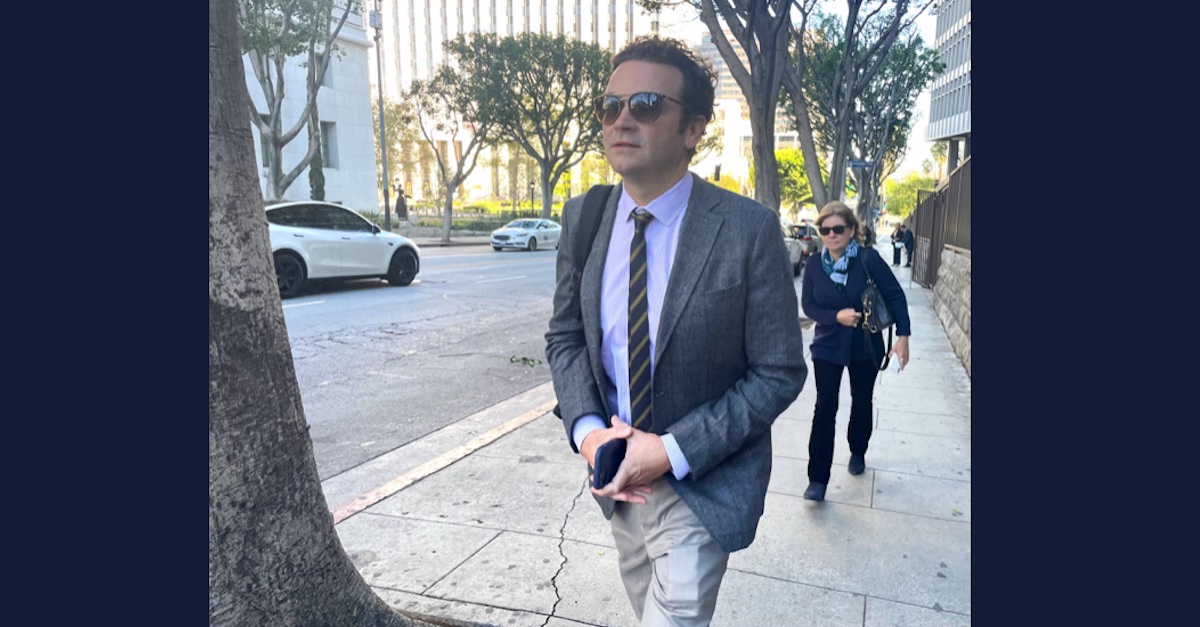 A prosecutor on Tuesday called actor Danny Masterson “a man for whom no never meant no” before detailing seven encounters with four women who say the Church of Scientology is harassing them for reporting to police that Masterson raped them.

While Masterson “looks like a well-dressed, well-groomed gentleman, I can assure you these victims here have a different image of Mr. Masterson,” Los Angeles County Deputy District Attorney Reinhold Mueller said in his closing argument, referencing a TV screen slide listing each victim for Masterson’s three counts of forcible rape in 2001 and 2003.

At the time, Masterson, now 46 and married with children, was one of the biggest stars on TV, playing Steven Hyde in That ‘70s Show from 1998 to 2006. He also “was someone who was kind of the center of this circular world, kind of the center of this tight group of friends,” Mueller said. Masterson was the kind of guy who would host parties at his home, invite you to come over and have a drink, Mueller said, spin records as a DJ and, if you got too intoxicated, invite you to spend the night.

Masterson seemed safe, Mueller said, but “If you were a young woman as each of these three victims were at the time, you were far from safe, because if you were incapacitated in his bed, he would rape you.”

“If you were incapacitated elsewhere in the house, he would come and find you. And if you were at his home and you were not yet intoxicated, and he would offer you the alcohol to get you there and then forcibly rape you,” Mueller said. “If you were in a relationship with him, he would control you. He would believe that he’s entitled to have sex with you any time he feels like it, and if you say no, he doesn’t care.”

Masterson’s lawyer Philip Cohen told jurors he was horrified that Mueller ignored so much conflicting testimony and fabricated evidence before detailing the high burden of proof required to convict Masterson, which he said simply can’t be found after four weeks of trial.

Cohen blamed prosecutors for unfairly bringing up Masterson’s involvement in the Church of Scientology, telling jurors that a word search of the trial transcripts shows that “over 700 times in this trial, Scientology was mentioned.” He mentioned jury instructions involving words such as “bias, sympathy, prejudice or public opinion.”

“There’s a reason for those words and those rules just like there’s a reason from the government’s standpoint why Scientology has been mentioned 700 times,” Cohen said, prompting Los Angeles County Superior Judge Charlaine F. Olmedo to remind the jury that the 700 figure is not evidence.

Mueller argued passionately for jurors to convict Masterson of each of the three counts, pointed directly him several times during his approximately two-hour argument. He called him “a rapist” while talking jurors through a slideshow that included graphic testimony quotes from Masterson’s alleged victims and reminders of the prominent role Masterson’s status as a devout Scientologist played in the four-week trial.

Mueller reminded jurors that Christine Carnell-Bixler said she joined the Church of Scientology at Masterson’s behest. She met Masterson at a party her modeling agency hosted for her after she secured a Revlon contract with Cindy Crawford, and she moved into his mansion a few weeks into their relationship.

“What she was left with is being in this guy’s world. She was in his world now. His friends, his circle and she gave up everything else she had,” Mueller said. She did so by her own choice, Mueller said, “because she believed that this church was going to save her life.”

Identified in trial by her first name and last initial, Carnell-Bixler has spoken publicly about Masterson and Scientology, describing herself in a letter to a U.S. House of Representatives committee as a “rape and cult survivor.” She testified in trial about two attacks by Masterson in September and December 2001, with Masterson charged criminally for the second. Her husband, The Mars Volta lead singer Cedric Bixler-Zavala, also testified.

Masterson’s first alleged victim testified about Masterson anally raping her after the two had consensual, vaginal sex. Identified in court as Jennifer B., she detailed extensive contact with Church of Scientology members about her complaints about Masterson, describing how Julian Swartz warned she would be “declared a suppressive person” if she reported Masterson to police.

Mueller displayed for jurors Tuesday a three-page report Jennifer B. wrote on April 25, 2003, for the Church of Scientology that detailed what was happening, including that Swartz had “told her not to use the word rape.”

But “despite being told no you can’t go to police,” Mueller said, Jennifer B. did just that on June 6, 2004. She then heard from an attorney for the Church of Scientology, who went to her house and delivered a message from Swartz that said, “You are in so much fucking trouble” for naming him as a witness, Mueller said Tuesday.

Mueller also reminded jurors of testimony from an accuser who asked to be identified in news reports only by her initials, N.T., and detailed a violent rape by Masterson that she said “felt like a jackhammer” and caused her to throw up in her mouth. She’d gone to his home at his invitation, hoping for possible romance, but testified about ending up in Masterson’s jacuzzi and then his shower, where he forced himself in her after she repeatedly told him she didn’t want to have sex.

“Ladies and gentlemen, she vomited in her mouth. not quite the romantic evening that [N.T.] had in mind,” Mueller said. He also reminded jurors that actress Tricia Vessey, who testified not as a charged victim but as a prior bad acts witness, said that Masterson told her when she asked him to wear a condom, “Diseases were in the mind.”

Mueller told the jury their verdict can “show him that ‘no’ actually means ‘no.'” He also detailed possible defenses by Masterson, telling jurors that consent to a sexual encounter can be withdrawn at any time and that asking someone to wear a condom is not consent.

“Just because somebody might not say the word no, that’s not a green light to go ahead. That does not mean yes,” he said.

He also reminded jurors of testimony from expert witness Mindy Mechanic, and he discussed the difficulty of being in a situation like Carnell-Bixler was and trying to tell someone you’re in a long-term relationship with that “you are a rapist, and I am a victim of your rape.” He also addressed the fact that the victims saw Masterson after the attacks, including Carnell-Bixler having consensual sex with him twice.

Mueller said it happens “60 percent of the time” because “it’s complicated. It’s not black and white.” He told jurors that Carnell-Bixler once loved Masterson, who was her boyfriend of six years.

“I think for years afterward she still loved him, maybe not in love, but she still loved him for her own reasons,” Mueller said. “And she wanted to repair that bond … because it’s easier that way. You don’t have to come to that recognition.”

Cohen is to continue his closing argument at 1:30 p.m. Pacific time. Mueller will give a rebuttal, then Judge Olmedo will instruct the jury. Deliberations could begin late this afternoon.