The Mars Volta Singer Testifies in Danny Masterson Trial About Emotional Conversation with Ex-Scientologist Wife: ‘She Had Been Raped’ 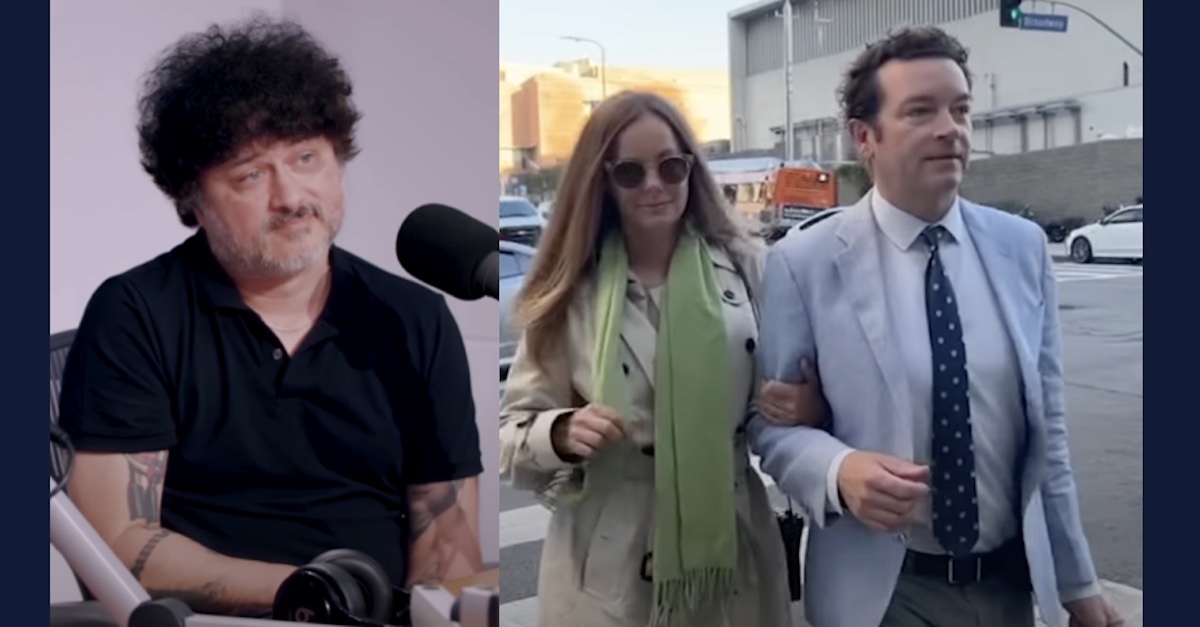 The leader singer of the rock band The Mars Volta testified Friday that he continues to be stalked and harassed by the Church of Scientology since his wife first told police she’d been raped by Scientologist and “That ’70s Show” actor Danny Masterson.

Cedric Bixler-Zavala did not detail specific acts because of a court order, but he affirmed he was being stalked and harassed and answered “yes, it is” when asked by Los Angeles County Deputy District Attorney Ariel Anson,”Is that by the Church of Scientology?”

“When did the stalking and harassment start?” Anson asked.

“Right around the time that she reported it to the [Austin, Texas] police department,” Bixler-Zavala said.

The musician was referring to his wife, Chrissie Carnell-Bixler, Masterson’s former girlfriend of six years and one of the three woman prosecutors say he raped in his home in the Hollywood Hills between 2001 and 2003. At the time, Masterson was one of the biggest stars of TV, playing Steven Hyde on “That ’70s Show” from 1998 to 2006. He later played Jameson “Rooster” Bennett on the Netflix series “The Ranch.”

The Los Angeles County District Attorney’s Office announced three rape charges against Masterson in June 2020. He’s out of jail on bond and attends the trial every day with his wife Bijou Phillips and a group of supporters that has included his mother.

Bixler-Zavala said neither he nor his wife were members of the Church of Scientology when they met. While his wife was a member while she was dating Masterson, Bixler-Zavala never has been, saying Friday, “I’ve done courses there, but I wouldn’t call myself a member.”

He identified Masterson sitting at the defense table and said, “I know that he used to date my wife.” He then answered questions about the discussion with his wife in which he said he learned Masterson had raped her.

Olmedo allowed Mueller to continuing his line of questioning but reminded Anson about her prior rulings, which prohibit testimony about specific acts and has added an additional layer of intrigue to the proceedings because the judge often must weigh what, exactly, to allow in testimony.

Prosecutors called Bixler-Zavala Friday to support testimony from Carnell-Bixler, who spent three days on the witness stand this week testifying about her six-year relationship with Masterson during the height of his fame and, like her husband, alleging the Church of Scientology continues to stalk and harass her.

Karin Pouw, a spokesperson for the Church of Scientology, told Law&Crime “there is no truth to he allegations about the Church” and prosecutors are “shamefully” focused on Masterson’s religion.

“With regard to the Church, the DA has elicited answers from Jane Doe #3 and her husband — and had them state as fact allegations about the Church — which are categorically untrue,” Pouw said in an email. She called the couple’s lawsuit “an attempted shakedown.”

“As you know, the Church is not part of this case,” Pouw wrote. “Inserting religion into this trial appears to be an attempt by the DA to divert attention from the relevant facts, whatever they may be.”

The legal disputes surrounding Masterson and the church have reached the nation’s highest court, with the U.S. Supreme Court on Oct. 3 declining to consider a writ petition lawyers for the Church of Scientology filed challenging a California appellate court ruling that said Carnell-Bixler wasn’t bound by the church’s arbitration requirements and could pursue her lawsuit in state court.

In Masterson’s case, Carnell-Bixler testified this week that she eventually realized after denouncing Scientology that Masterson had been controlling and abusive — and that encounters she’d had with him were actually sex crimes on his part. She said she described Masterson’s “general cruelty” but didn’t share everything with her husband “because I didn’t want him to go and murder somebody.”

But she testified that she told him the basics of how she awoke to Masterson penetrating her, which her husband in turn testified on Friday that she’d told him about in 2010 or 2011 as the couple talked in their home in Los Angeles’ Franklin Hills.

“It seemed like she was controlled by remote,” Bixler-Zavala said.

“What does that mean?” Anson asked.

“It means that when she was describing her relationship and the certain incidents, that she was holding back. She was not necessarily forthcoming about everything. She seemed afraid,” Bixler-Zavala answered.

He said his wife’s “lack of eye contact [and] her physical behavior,” which included looking down when certain details come up, made him believe she was afraid.

He said his wife told him “that she was abused sexually” and that she’d awoken to Masterson laughing at her and telling her he’d been inside her.

“She felt like she was in a bit of a haze or a fog. She couldn’t remember a lot of it,” he said. “She said her bottom hurt really badly . . . I remember her saying how disoriented she felt, how hungover she felt.”

Bixler-Zavala said he reacted to his wife’s disclosure “by telling her that she had been raped.”

“The tone of my voice was – I was angry, so it was probably a little aggressive,” Bixler-Zavala said. He said Carnell-Bixler appeared as though “she was protecting him” by withholding details, though Judge Olmedo said the answer was speculative and struck it from the record.

Bixler-Zavala said his wife later told him of Masterson striking her during sex as “he was penetrating her against her will” and that she’d “fought him off and pulled his hair.”

As she was telling him this, Carnell-Bixler “seemed embarrassed,” Bixler-Zavala said.

“She seemed angry, and she seemed, like, relieved, as well. All in one,” he said.

Bixler-Zavala told Cohen during cross-examination that he and his wife hadn’t talked about “the substance of the case” at all. He learned he would be called as a witness while speaking with a Los Angeles police detective on Oct. 10, 2022.

Cohen said to him early in cross, “I’m going to ask you a ridiculous question, but you love your wife very much?”

He said that “as a husband” he’ll “never forget” what Carnell-Bixler told him.

Cohen questioned Bixler-Zavala about his statements to police, implying they didn’t include details he’d shared in testimony, such as that Masterson had laughed in a “childlike manner” and told Carnell-Bixiler, “I had sex with you there” when she awoke complaining that her buttocks hurt.

Cohen also asked if the couple’s civil lawsuit against Masterson and the Church of Scientology seeks monetary damages. His wife had testified that it doesn’t, but Bixler-Zavala said Friday that it does.