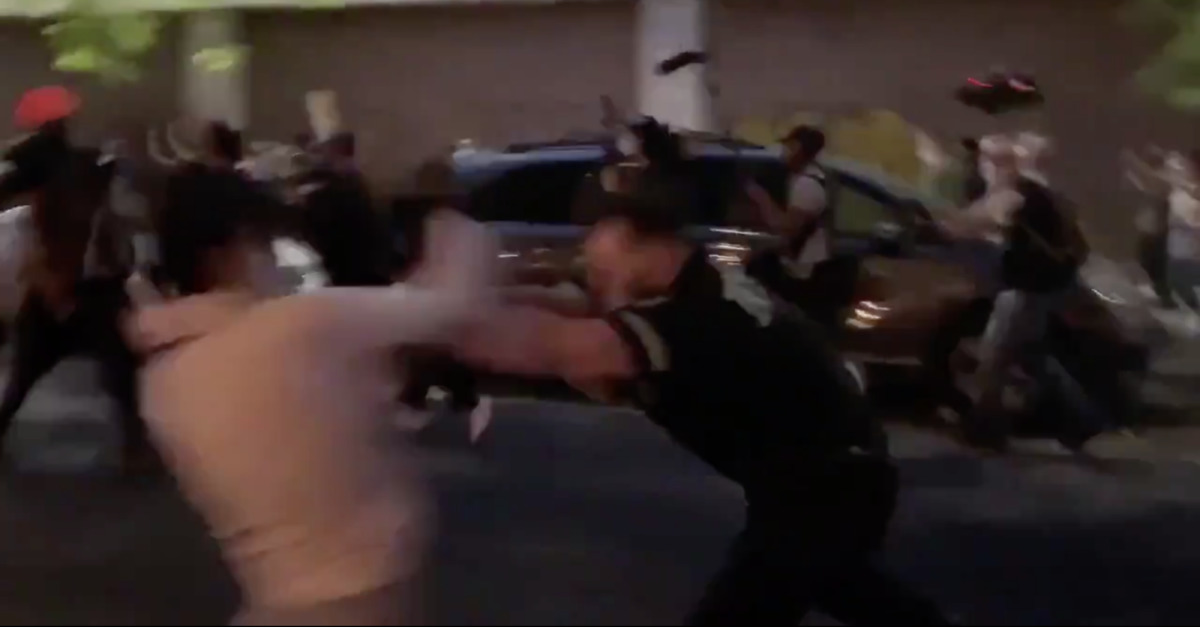 An officer with the New York City Police Department (NYPD) turned himself in after shoving a young woman to the ground during a Black Lives Matter protest in Brooklyn last month.

“I fully support the long-held American tradition of non-violent protest,” Brooklyn District Attorney Eric Gonzalez said in a statement. “I cannot tolerate the use of excessive force against anyone exercising this Constitutionally guaranteed right. This is especially true of those who are sworn to protect us and uphold the law. I am deeply troubled by this unnecessary assault. We will now seek to hold this defendant accountable.”

The 28-year-old is a resident of Holbrook, Long Island. He reports to the 73rd Precinct which includes the majority-black Brownsville neighborhood.

“Once again, Mayor de Blasio and the NYPD brass are sacrificing cops to save their own skin,” the police union boss said in a statement before the officer was charged. “They created the failed strategy for managing these demonstrations. They sent police officers out to do the job with no support and no clear plan. They should be the ones facing this mob-rule justice. We will say it again: New York City police officers have been abandoned by our leadership.”

In several viral videos, Dounya Zayer, 20, can be seen on a street near the Barclays Center protesting the Minneapolis Police Department’s killing of George Floyd on the evening of May 29 when Officer D’Andraia shoves her to the ground.

In one video, the officer tells her to “get out of the street” and gestures with his hand. Zayer quickly asks “Why?”

She later claimed that D’Andraia immediately grabbed and threw her cellphone after that initial confrontation.

In another video, the officer can be seen laying both of his hands on Zayer as he forcefully shoves and slams her into the curb.

Zayer was then taken to a nearby emergency room and hospitalized after an apparently “serious seizure.” The moments between the alleged phone-throwing incident and the videotaped shoving incident are currently unclear.

“Let me explain a little bit about what happened, like, before the video started,” Zayer said in a Twitter post from her hospital bed. “When I got pushed back, I realized what was going on because everyone was getting pushed back. I wasn’t the only one. So, I looked down, I started recording, I look back up and that’s when the video I just posted starts. That’s when the guy pushed my phone. But as you can see, I was already running backwards, it wasn’t like I was trying to get in his face.”

Another video showing a separate angle of the incident seems to show she was walking backwards at the time of the shoving.

Zayer has legal representation and is calling for Brooklyn authorities to charge the officer’s supervisor, Commander Craig Edelman as well.

“Officer Vincent J. D’Andraia pushed me with so much force that I knocked out of my shoe, and slammed the back of my head on the concrete–a push so violent that I had a seizure and still have a concussion,” she said at a press conference last week. “And he did this in front of his lieutenant and multiple other officers who watched me hit the ground.”

Both officers were suspended without pay after the incident.

“While the investigations have to play out, based on the severity of what we saw, it is appropriate and necessary to assure the public that there will be transparency during the disciplinary process,” NYPD Commissioner Dermot Shea said in a statement Friday.