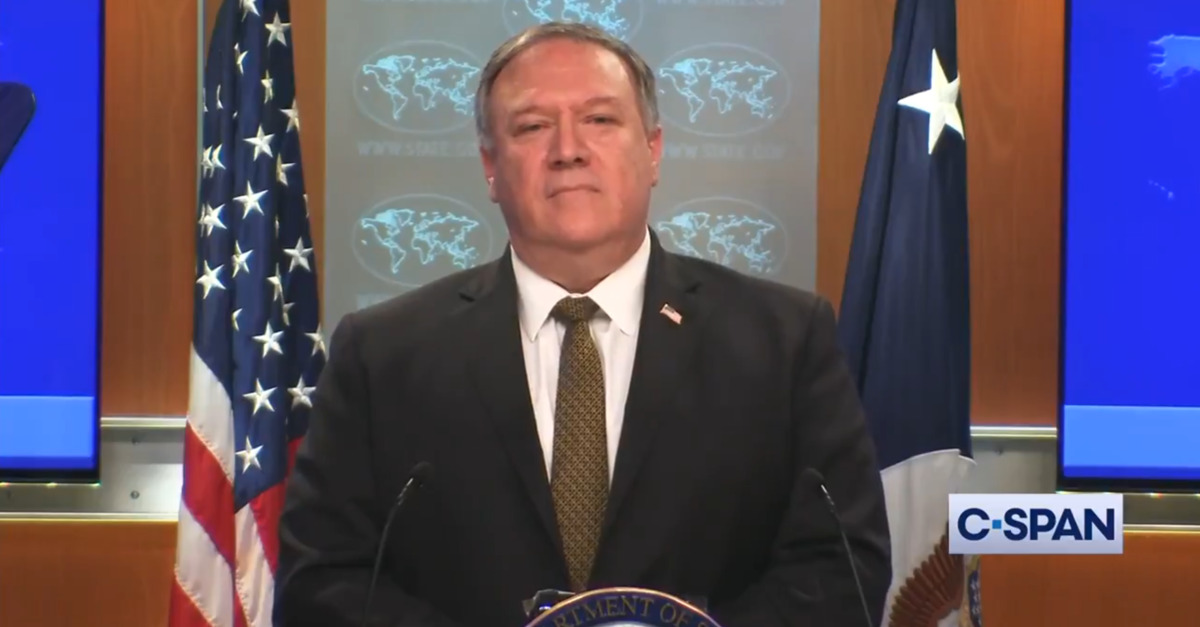 Secretary of State Mike Pompeo orchestrated the ouster of State Department Inspector General (IG) Steve Linick in early May. That much is certain. Pompeo insists the removal was entirely above-board while critics assert the firing was retaliatory. Newly-released documents suggest those critics are right.

On Wednesday, Pompeo cast his decision to request the IG’s removal in terms of an alleged deficiency to the State Department.

“Steve Linick was a bad actor in the Inspector General Office here,” he said during a press conference. “He didn’t take on the mission of the State Department to make us better.”

Linick testified that Undersecretary of State for Management Brian Bulatao “tried to bully” him on various occasions–once over a leak investigation and repeatedly over the IG’s investigation into the controversial weapons deal with the repressive Islamist dictatorship.

“In connection with our work on the arms control, the emergency certification on the arms control, he told me that it wasn’t an appropriate review because it was a review of policy,” Linick said in response to a question. “And I told him that, under the Foreign Service Act of 1980, it was within the IG purview to review how policy is implemented. And I was trying to draw that distinction that, while we don’t engage in policymaking, we look at how policy is carried out as we are required to by law.”

“And what was Undersecretary Bulatao’s response when you provided him with that clarification?” the Democratic Foreign Affairs counsel–whose name is redacted in the transcript–asked.

“He just continued to push back,” Linick replied.

The inspector general clarified his remarks when pressed by the Republican Foreign Affairs counsel.

“You said that Undersecretary Bulatao bullied you,” the GOP attorney asked. “Can you expound some more on that for us?”

“Sure,” Linick replied. “We had a number of disagreements about the way in which a leak investigation was going to be handled. And I would rephrase that, not that he bullied me, but that he attempted to bully me. He wanted to sort of take control over a leak investigation that was being conducted by the [Department of Defense] IG. So that’s one example of that.”

“The other has to do with the work we were doing on the arms control, in trying to have us not work on that matter, stating that it was a policy matter and it was not within our jurisdiction to look at it. So that was sort of the nature of that attempt to bully,” he continued. “Those are examples.”

Linick also revealed specific details about Pompeo’s own knowledge of the Saudi arms deal inquiry–specifically the secretary of state’s reticence and ultimate refusal to answer the IG’s questions.

“We requested that our team be permitted to interview the Secretary in 2019, late 2019,” he said in the interview transcript released Wednesday morning. “I had told Undersecretary Bulatao and Deputy Secretary [Stephen] Biegun and the Legal Adviser about this request, and, in assessing my request, they asked for, sort of, the topic areas for the interview, just the broad-brush topics, which we provided. And then, ultimately, as he acknowledged in the press, he sent written responses to that question and, at that time, did not agree to the interview.”

But initially there were negotiations, Linick noted, Pompeo’s team suggested a one-on-one interview but the IG’s office felt they needed at least one additional person there to serve as a witness. That was apparently the end of those discussions.

Initial allegations suggested that the inspector general had raised Pompeo’s ire due to a relatively pedestrian corruption inquiry focusing on quotidian abuse of power allegations. To wit: a lower-level political appointee being forced to fetch the secretary’s dry cleaning and perform other similarly menial tasks.

Widespread implications raised by the initial slate of coverage and accusations was that Linick was targeted because of the embarrassing headlines likely to result from any alleged misconduct by a high-profile member of President Donald Trump‘s cabinet.

But the narrative shifted once details of the IG’s work on the Saudi arms deal came to light. Linick was apparently on the last leg of that effort and ready to release his findings when the axe fell.

“His office was investigating — at my request — Trump’s phony declaration of an emergency so he could send weapons to Saudi Arabia,” House Foreign Affairs Committee Chair Eliot Engel (D-N.Y.) said in a statement released on May 18. “We don’t have the full picture yet, but it’s troubling that Secretary Pompeo wanted Mr. Linick pushed out before this work could be completed.”

Pompeo has acknowledged his awareness of the Saudi probe but has consistently maintained his ignorance about the corruption probe.

“I didn’t have access to that information,” Pompeo said during a press conference on May 20, “so I couldn’t possibly have retaliated.”

But Linick’s testimony also casts doubt on that excuse.

“We had an administrative review of allegations relating to misuse of government’s resources by the Secretary and his wife, but I can’t talk about the merits of that,” Linick noted. “As to that review, I never spoke with the Secretary directly about it. There was a point in time in late 2019 that my office reached out to get documents from the office of the Secretary as well as the Office of the Legal Adviser.”

“And during that same period of time, I did speak with Undersecretary Bulatao, possibly Deputy Secretary [John] Sullivan, but I am not sure, about the reasons—about the fact that we were making these document requests so they weren’t surprised,” he added.

“And these were document requests that related to, as you said, allegations of improper use of Department resources by Secretary Pompeo and his wife,” the Democratic counsel clarified. “Did I get that right?”