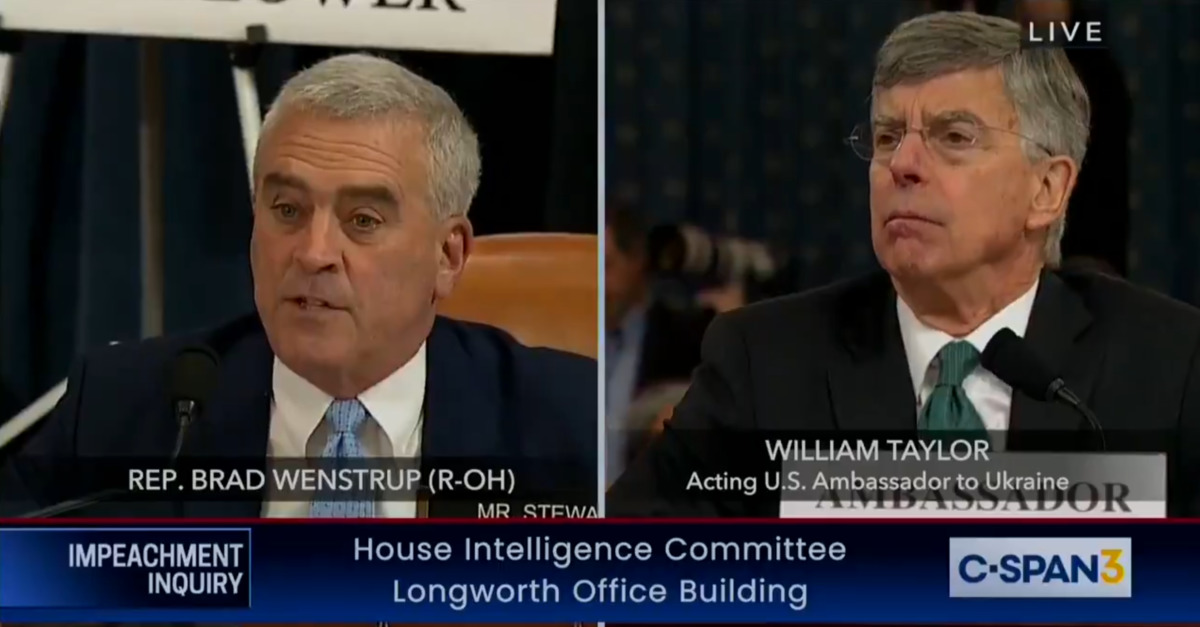 They’re not sending their best people.

House Republicans were already receiving a lot of criticism over their lead interrogator Steve Castor‘s apparent lack of focus and ability during his Wednesday afternoon cross-examination of U.S. Chargé d’Affaires for Ukraine Bill Taylor and mid-tier State Department secretary for Europe and Eurasia George Kent. But Rep. Brad Wenstrup (R-Ohio) was not about to be outdone.

“Maybe now we understand what President [Barack] Obama meant when he told Russian President [Dmitry] Medvedev that he’d have more flexibility after his election,” Wenstrup theorized while finishing up his time with Taylor. “Maybe that flexibility was to deny lethal aide to the Ukraine–allowing Russia to march right in and kill Ukrainians.”

.@RepBradWenstrup accuses the Obama administration of colluding with Russia to …. hurt Ukraine? As opposed to Trump, who he absurdly portrays as Ukraine’s staunch ally. It doesn’t make much sense. pic.twitter.com/smHg9sLtOW

The Ohio Republican was referring to a minor scandal from the spring of 2012 when then-president Obama was holding bilateral nuclear talks with his then-Russian counterpart in Seoul, South Korea.

An article from the Reuters wire service at the time notes:

As he was leaning toward Medvedev in Seoul, Obama was overheard asking for time – “particularly with missile defense” – until he is in a better position politically to resolve such issues.

“I understand your message about space,” replied Medvedev, who will hand over the presidency to [Vladimir] Putin in May.

“This is my last election … After my election I have more flexibility,” Obama said, expressing confidence that he would win a second term.

Obama’s comments, as the report above makes clear, were specifically about missile defense issues–but never mind that.

Two years later, the Donbass was in flames.

America had welcomed regime change–some say the U.S. probably supported the coup–in Ukraine and the ouster of the corrupt and Russian-friendly government of Viktor Yanukovych. The United States did, however, piece together the resulting administration. Russia eventually invaded and annexed their former-and-future territory of Crimea. Relations have been largely stagnant since then.

Taylor paused and drew breath, raising his eyebrows and both hands, before attempting to answer: “Mr. Chairman, I have no knowledge of what was in–”

Schiff quickly cut him off: “It was more or less a rhetorical question.”