Supreme Court Denies Anti-Abortion Petition from Unborn Children Seeking to ‘Clarify’ Whether Fetuses Have Standing to Sue in U.S. Courts 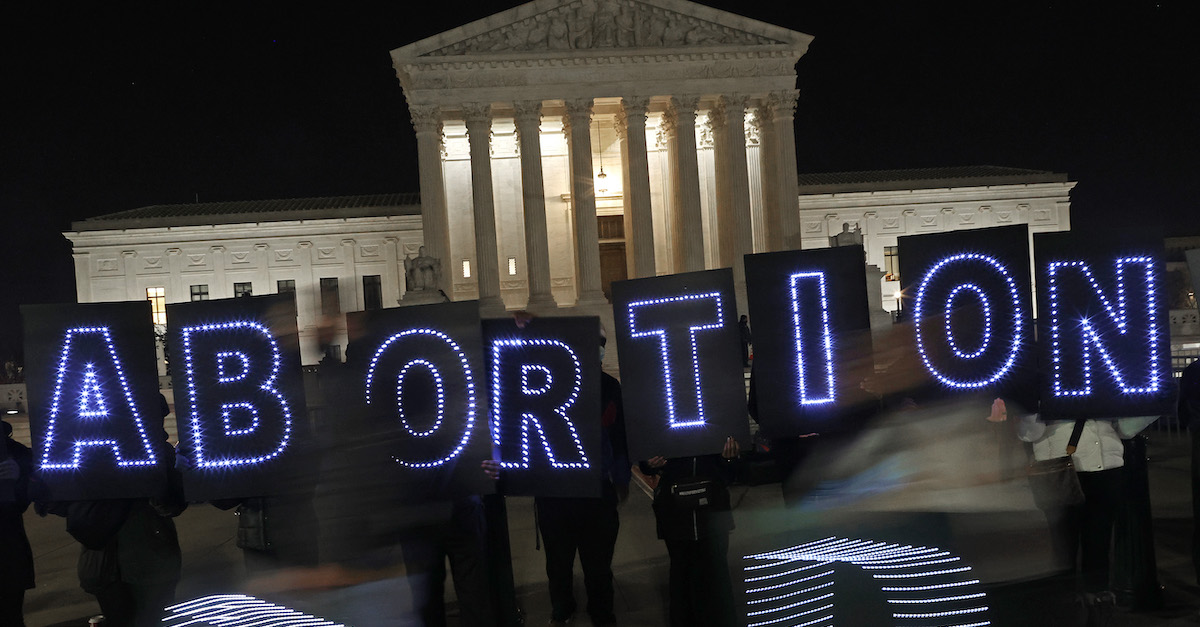 Protesters, demonstrators and activists gather in front of the U.S. Supreme Court on Nov. 30, 2021, as the justices prepared to hear arguments in Dobbs v. Jackson Women’s Health, a case about a Mississippi law that bans most abortions after 15 weeks.

The U.S. Supreme Court on Tuesday denied certiorari for a group of anti-abortion activists who asked the nine justices to consider the issue of fetal personhood under the law in a September petition.

In this week’s orders list, the nation’s high court included the denial in a section dedicated to such denials. As is typically the case, the denials section largely lists which cases the court has declined to hear – without explanation or comment. Often, however, a very small minority of certiorari denied cases will feature a brief elaboration.

The justices dispensed with the case stylized as Doe v. McKee without a word, dodging, at least for now, the hot-button debate around what is likely to be a new front in conservative politics.

No states have fetal personhood laws; though some have attempted to enact such legislation but been blocked by lawsuits and courts. There is, however, a legal recognition of some fetal rights in the areas of medical malpractice tort law, estate law, and wrongful death laws.

As Law&Crime previously reported, Catholics for Life, Inc., Nichole Leigh Rowley, and two unborn children – the “Doe” petitioners – argued their recent loss in the Rhode Island Supreme Court should be reconsidered in light of the decision to overrule Roe v. Wade. The Dobbs decision, the petitioners noted, came just one month after the state court issued their loss in an opinion “deeply rooted in Roe.”

“This Court should grant the writ because, in light of Dobbs, the Rhode Island Supreme Court erred in holding that Petitioners, Baby Roe and Baby Mary Doe, were categorically not ‘any person’ recognized under the Fourteenth Amendment.” the filing argues – staking its legal reasoning on a liberal interpretation of the 14th Amendment and the precise legal way that Rhode Island finally struck down all of its remaining anti-abortion laws in 2019.

The omnibus law that took aim at the Ocean State’s remaining laws, the Reproductive Privacy Act, also eliminated decades-old statutory language that arguably contained provisions that offered legal rights to the unborn. And, the petitioners argued, since the RPA has no severability clause, it is vulnerable to judicial scrutiny.

“Therefore, if any part of the RPA fails judicial scrutiny, the whole RPA fails,” the denied petition argued. “And, Baby Mary Doe and Baby Roe’s, ‘personhood’ is revived, entitling them to the full protection and guarantees of the Fourteenth Amendment of the United States Constitution – and its reciprocal provision in the Rhode Island Constitution. The concomitant result therefore is that each qualifies as “any person” under federal and state law, who may not be deprived of “life” without due process nor the guarantees of equal protection under law.”

Of course, the Rhode Island Supreme Court already subjected the RPA to judicial scrutiny and found all of the statute – at least all of the sections attacked by the petitioners – on firm ground. The state court, of course, based most of its opinion affirming the RPA on a now-defunct precedent and former constitutional right.

But the case had, in fact and law, already been disposed of and decided. In their own reply brief, Rhode Island said the anti-abortion activists did not even have standing to sue. The high court entertained the petition but, in the end, decided against hearing the case.

None of the merits advanced by either side ended up being decided; the Rhode Island Supreme Court’s decision is the law in the state.

The case hinged upon whether or not the U.S. Supreme Court would force lower courts that have decided abortion cases in line with the since-rubbished reasoning of Roe and Planned Parenthood v. Casey – the 1992 case that explicitly affirmed Roe and the core abortion right – to reconsider such opinions in light of Dobbs.

At least for the time being, such decisions are being allowed to stand.