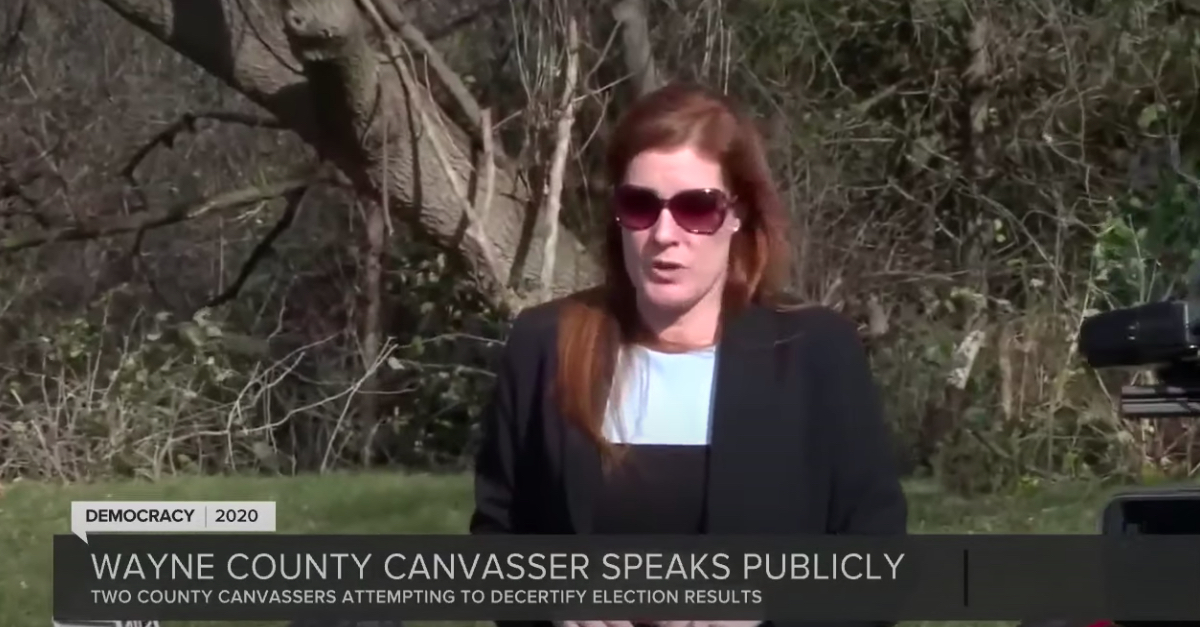 The U.S. Attorney’s Office for the Eastern District of Michigan on Wednesday announced that a New Hampshire woman was charged with sending threatening communications to the chair of the Wayne County Board of Canvassers after the Detroit-area Republican election official refused to certify the 2020 election results last month.

According to the criminal complaint, on Nov. 18, Katelyn Jones, 23, sent Board Chair Monica Palmer several profanity-laden text messages from a 269-area code phone number referring to Palmer as a “terrorist” and implying that she and her family, including her daughter, were in grave danger. The DOJ did not name Palmer in the news release, but it’s clear the alleged threats were made against her. One of the texts was addressed to “Monica” and, in any event, Palmer is the chairperson of the Wayne County Board of Canvassers.

“Fucking with our elections is TERRORISM, and us Americans clearly don’t tolerate terrorists so yes you should be afraid, your daughter should be afraid and so should [your husband],” one of the messages read.

“You have made a grave mistake Monica I hope you realize that now,” said another.

Authorities said that Jones created a TextMe account to send the messages which authorities were able to trace back to her specific IP address.

The complaint also alleged that Jones—a former Michigan resident—sent Palmer two graphic photographs of a “bloody, naked, mutilated, dead woman lying on the ground,” then sent a photograph of her minor daughter.

Jones admitted making the threats against Palmer and her family when interviewed by agents with the Federal Bureau of Investigation, stating that she believed Palmer was “interfering with the election,” the FBI said in a court filing.

“The allegations in this case should make all of us disgusted,” United States Attorney Matthew Schneider said in a statement.  “There is simply no place in Michigan, or in the United States, for chilling threats like this to people who are simply doing what they believe is correct.”

Palmer and another Republican official William Hartmann refused to certify Wayne County’s election results during a Nov. 17 board meeting that was streamed online. The two initially cited “problems” with the county’s absentee ballots, but changed their votes and certified the results after they were criticized for hours by people watching the meeting, according to the Detroit Free Press. President Donald Trump called Palmer after the meeting, then she tried and failed to rescind her certification.