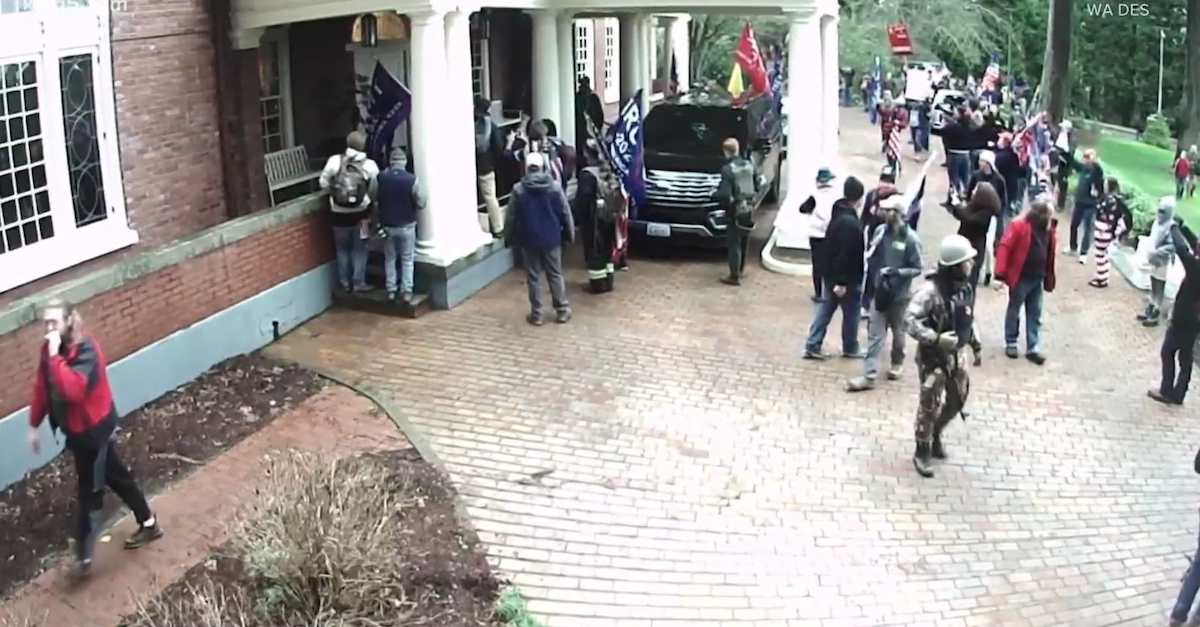 A mob of more than 100 Trump supporters broke onto the grounds of Washington State Gov. Jay Inslee’s residence on Wednesday, the day of the U.S. Capitol insurrection.

Amid the shocking scenes of the U.S. Capitol insurrection, a simultaneous breach onto the grounds of the Washington state governor’s residence was relegated to local news. A mob of more than 100 people stormed through and climbed over the gate protecting Democratic Gov. Jay Inslee‘s mansion for roughly half an hour, chanting “Stop the Steal!” while foisting U.S. flags, conspiratorial placards, and Trump banners. There have been no arrests to date, and authorities say the matter remains under investigation.

On Sunday, Gov. Inslee took no chances with the anticipated start of Washington’s legislative session this week, activating the National Guard to secure the perimeter of the statehouse.

“As legislators begin their work on behalf of the people of the state of Washington, we must do whatever we can to ensure that they can do that work without fear, intimidation or harassment,” the governor announced in a press release. “The actions we saw in both Washington, D.C. and Olympia earlier this week were completely unacceptable and will not be repeated in our state capital again.”

A former Democratic presidential candidate who ran on a climate-change platform, Inslee made clear that protests would be permitted outside restricted areas meant to assure the safety of state legislators and staff.

“But in light of the most recent insurrection activity, the state cannot tolerate any actions that could result in harm, mayhem or interruption of function of democratic institutions,” Inslee continued. “Any illegal intrusion of the Capitol, state buildings or restricted areas will not be tolerated and strictly enforced.”

The governor disclosed that up to 750 National Guard will assist a large number of Washington State Patrol troopers, along with regular Capitol Campus Security.

“That’s because the legislative session is about to begin,” Wright noted, referring to the proceedings on Monday to pass virtual rules allowing the state to conduct business remotely during the COVID-19 pandemic. “There were planned and expected events to occur today. So, we’re preparing for those events and making sure the security measures are in place to assure that the legislative body is able to conduct their business as needed.”

When Twitter banned outgoing President Donald Trump on Friday, the company disclosed stirrings of a “proposed secondary attack” propagating on and off its platform and targeting the U.S. and various state capitol buildings.

“We’ll continue to evaluate the status of the situation and adjust accordingly,” Wright said. “Right now, we’re going to get through this particular incident and event, and then we’ll start concentrating on the next one, which would probably be Inauguration Day.”

New: @RepJasonCrow’s office has released a readout of his conversation with Army Secretary Ryan McCarthy, which includes this—“Secretary McCarthy indicated that DOD is aware of further possible threats posed by would-be terrorists in the days up to and including Inauguration Day” pic.twitter.com/b58yi7Mgqi

Online extremists have openly propagated information about a so-called Million Militia March in the lead-up to President-elect Joe Biden’s inauguration.  Rep. Jason Crow, a Colorado Democrat who was one of Trump’s impeachment prosecutors, released a readout of his conversation with Army Secretary Ryan McCarthy, which quotes Trump’s appointee as describing the Pentagon as “aware of further possible threats posed by would-be terrorists in the days up to and including Inauguration Day.”