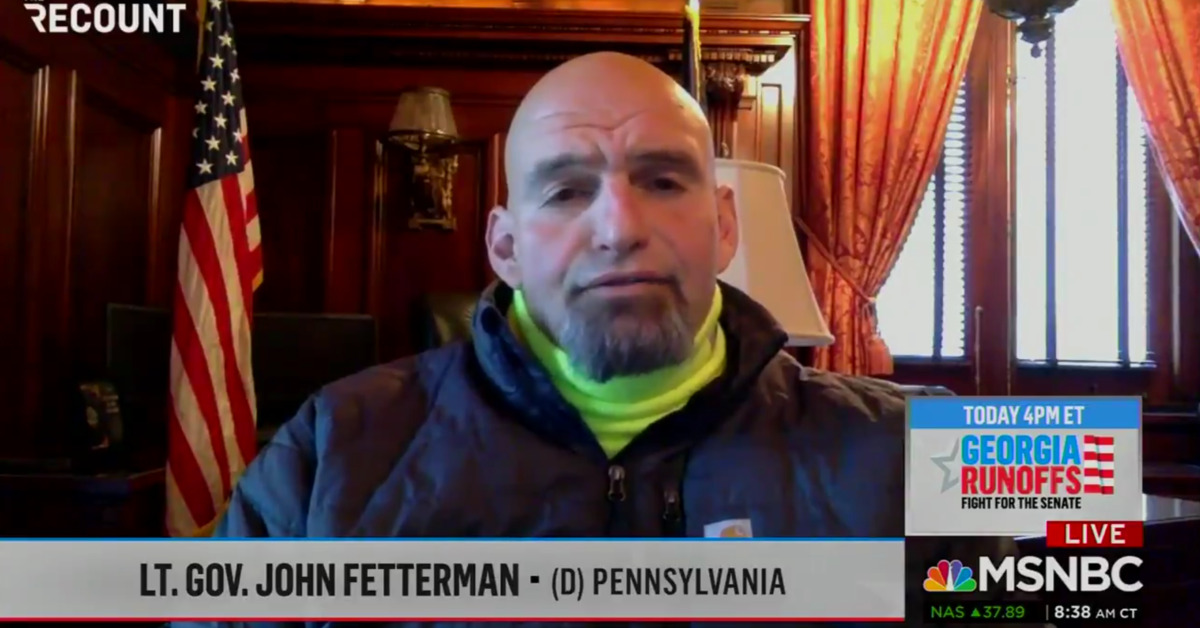 Republicans in Pennsylvania voted to remove Lieutenant Governor John Fetterman (D) from the Keystone State Senate chamber on Tuesday during a contentious and shout-punctuated vote which was immediately likened to an all-out assault on democratic institutions.

PA Republicans voting to remove Lt. Governor John Fetterman from President of the Seate for the day.

A democrat can be heard audibly protesting. pic.twitter.com/XaQzgfBMgt

Brewster narrowly fended off a challenge from pro-Trump Republican Nicole Ziccarelli–notching a 69-vote victory on the strength of mail-in ballots. The GOP, in their efforts to discount mail-in ballots cast during the 2020 election, have taken Ziccarelli’s side as she mounts a legal challenge in the federal courts to Brewster’s since-officially-certified win.

The Philadelphia Inquirer‘s Angela Couloumbis took stock of the extraordinary scene in a brief Twitter thread:

What is happening in the Pa. Senate is chaotic. The Republicans who control the chamber have effectively sidelined Lt. Gov. Fetterman from presiding. Democrats are trying to get a word in, but not being recognized. This as Dems protest GOP’s refusal to seat Dem Sen. Jim Brewster.

Democrats had tried to prevent anyone from being sworn in today. The GOP, which holds the majority, shut that down by voting to prevent Lt. Gov. Fetterman, a Democrat, from presiding over the chamber. With control of the chamber, Rs are now moving to recognize elex results.

The result: it’s almost like two parallel sessions are unfolding in the Senate… what the GOP is running; and what the Democrats, who are in the minority, are trying to accomplish, without being recognized.

Ultimately, the GOP’s efforts to remove Fetterman, a self-described democratic socialist in the Sen. Bernie Sanders (I-Vt.) mold, were unsuccessful. Fetterman stood his ground and did not leave.

“Fetterman did not leave the chamber or the rostrum,” according to the Inquirer‘s Abraham Gutman. “[The lieutenant governor was] ignored by the Republican senators in the majority.”

After that parliamentary procedure, the GOP anointed Republican Sen. Jake Corman as president pro tempore and made him the body’s acting presiding officer. Corman then began recognizing the commonwealth’s election results–with the glaring absence of Brewster’s re-election.

“There is nothing about this day that is appropriate,” one Democratic state senator shouted as Corman began to recognize those minus-one election results.

“And we will not lay down and roll over because we got more lawful votes than the folks on the other side of the aisle,” he continued. “This is about Pennsylvania–not Democrats or Republicans. This isn’t about someone winning. This is about protecting our democracy. That’s what this is.”

The GOP went on to steamroll their opponents. A calm chorus of Republican “ayes” followed the Democrat’s shouting.

“This is not a roll call vote,” the Democrat screamed again. “The president has not been acknowledged, has not been recognized–it is inappropriate to do such. We will not participate in this farce.”

But the ayes had it.

“Republicans in Pennsylvania and nationally have spread disinformation and used it to subvert the democratic process,” he said. “Sen. Jim Brewster rightfully won the 45th Senate District, but Senate Republicans are ignoring the voters in the district and refusing to swear him in as Senator. This is a shameful power grab that disgraces the institution. It is simply unethical and undemocratic to leave the district without a voice simply because the Republicans don’t like the outcome of the election.”

“Voters, not Harrisburg politicians, decided this election, and Sen. Brewster is the rightful winner,” Wolf continued. “All ballots were counted and certified, and the results are accurate. Sen. Brewster received the most votes in this race and should be sworn in as the Senator for the 45th District. There is no precedent, and no legal rationale, for failing to do so. I will do everything in my power to ensure that voters have the final say in elections.”

Brewster, for his part, took the chaos and delay in stride:

Jim Brewster, mensch, asked that all other Democratic senators be sworn in. He didn’t want the issue around his election to take away from the celebratory nature of the day for others, according to Williams. They are sworn in, including @NikilSaval of Philadelphia. pic.twitter.com/czrC2M4eli

Pennsylvania State Capitol observer Elijah Cohen noted that the removal attempt against Fetterman was only valid for the day and later addressed the seemingly astonishing nature of that action.

“Because they can, is what it comes down to,” he tweeted.

Editor’s note: this article has been amended post-publication to include a response from the governor of Pennsylvania.