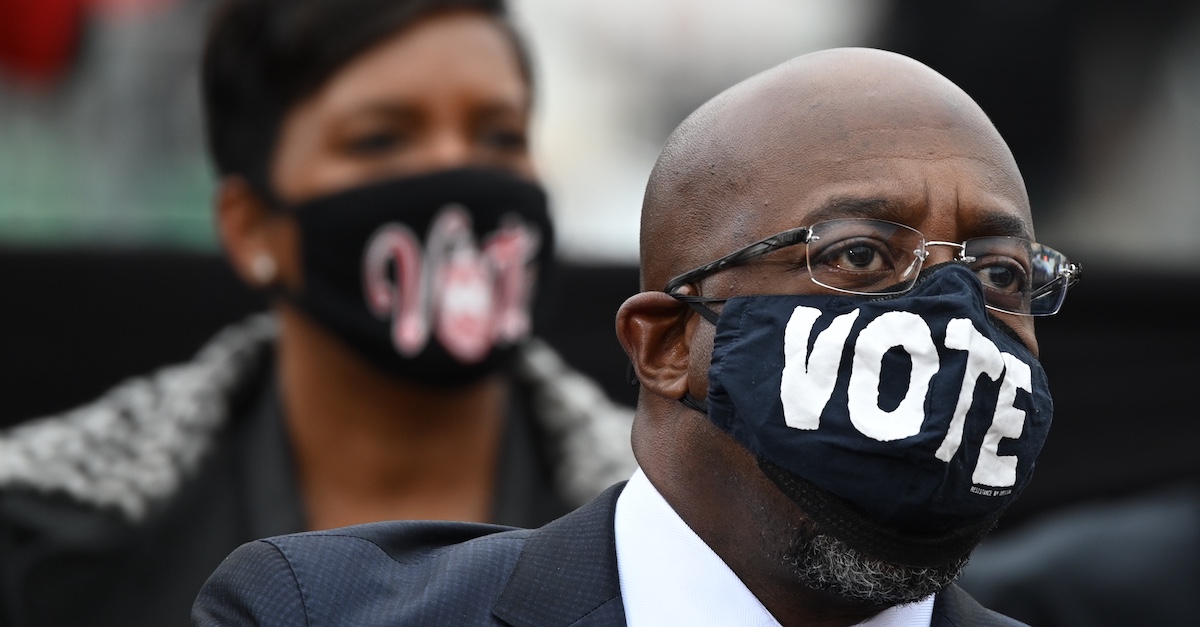 For the second time in one day, a federal judge in Georgia tossed out a Republican-led challenge against absentee voting in the Peach State’s runoff election now underway.

“As the parties are aware, federal courts are courts of limited jurisdiction,” U.S. District Judge Eleanor L. Ross, a Barack Obama appointee, ruled on Thursday, finding a lack of standing.

“All of plaintiffs’ claims are based on theories of potential future injury,” Ross added, finding that too “speculative” to carry the day.

In 2018, Judge Ross ruled against a voter roll purge by then-Secretary of State Brian Kemp. Kemp later became Georgia’s Republican governor and has been attacked by outgoing President Donald Trump repeatedly for refusing to hand him the Peach State election he lost.

Hoping to turn a corner from Trump’s resounding losses, two of the party’s attorneys from the heavyweight law firm McGuireWoods tried to distance themselves from the courtroom antics of the lame duck, his allies and his proxies.

Trump struggled throughout his last-gasp lawsuits to find competent legal talent, with major law firms largely refusing to be associated with his outlandish legal theories amid public outcry of their anti-democratic aims. Their drumbeat of breathtaking requests to overturn elections in Pennsylvania, Wisconsin, Michigan, Georgia and elsewhere have been rejected at every turn, leading to precedents that have worked against mainstream conservatives.

Terwilliger’s colleague Michael Lee Francisco, from the same firm, made sure to emphasize what he called the “narrow” focus of his requested relief.

The Republicans in this case want to increase the number of eyes on absentee ballots during the signature-matching process of verification. The other lawsuit rejected this morning also challenged early processing of absentee ballots and the use of unattended drop boxes.

Both lawsuits failed in part because of the legal antics of right-wing lawyer Lin Wood, whose conspiratorial ravings have made it harder for the conservatives mainstream to get their lawsuits out the gate.

The 11th Circuit Court of Appeals, which is binding upon Georgia, tightened the rules for jurisdiction in rejecting an appeal a ruling by a Trump-appointed judge who found Wood’s last-ditch bid to block certification of the Peach State’s vote failed as a matter of law and fact.

Like Wood, Georgia Republicans moved late in their effort to change the voting rules.

“We’re not on the eve of an election; we’re in the middle of it,” noted Charlene S McGowan, counsel for Georgia’s Office of the Attorney General.

Also like Trump’s allies, Georgia Republicans did not allege any specific fraudulent vote, only casting suspicion on signature-matching data.

“They cannot point to any specific unlawful ballots that were counted,” McGowan noted.

“In sum, what these reports tell us is really nothing,” Callais said.

Agreed upon by all parties is the monumental import of Georgia’s January runoffs, which could determine control of the Senate and the ability of President-elect Joe Biden’s new administration to govern through Republican obstruction.

“All eyes are on Georgia for the upcoming runoff election for both U.S. Senate seats,” the GOP’s federal lawsuit noted. “Public confidence in the integrity of the elections process is essential to the preservation of our democratic system.”

That confidence has been under relentless assault by Trump and his GOP loyalists, who are more than a month deep into an offensive of dozens of state and federal lawsuits alleging widespread fraud, but never coming close to proving it.