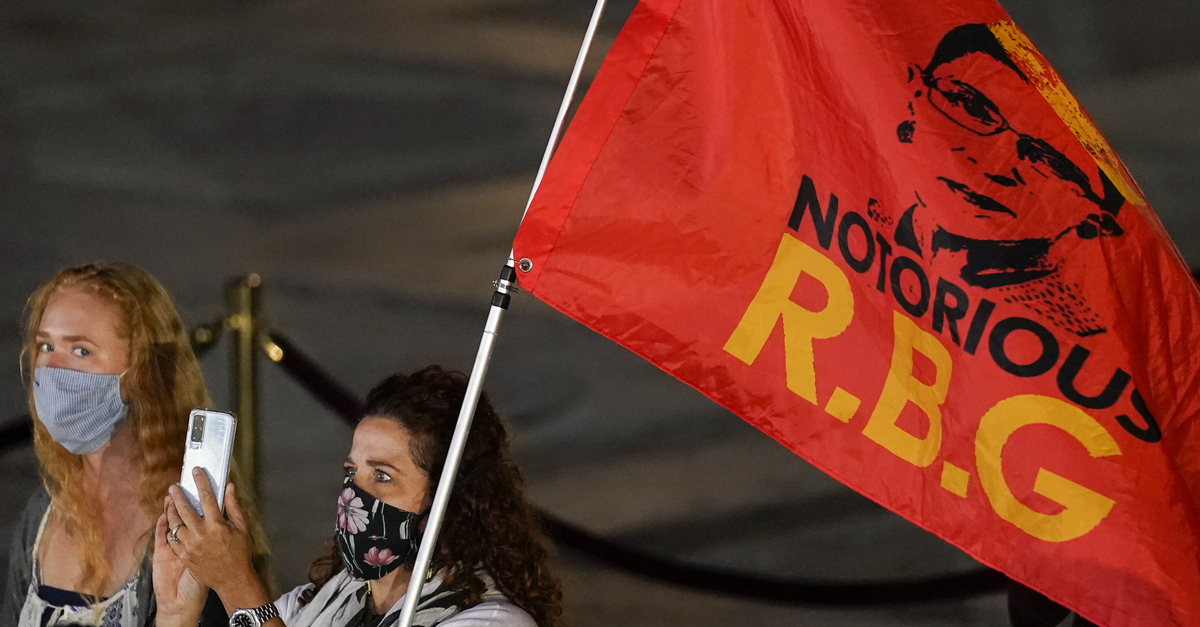 A woman holds a Notorious RBG flag as mourners pay their respects to Justice Ruth Bader Ginsburg as she lies in repose in front of the US Supreme Court in Washington, DC on September 23, 2020.

A voter in Southbury, Connecticut was forced to hide a Ruth Bader Ginsburg shirt while voting on Election Day.

According to the Republican-American, Doreen Lawson was directed to “zip up” her jacket in order to “cover up” the t-shirt because it was apparently too “political” for elections officials there.

“I felt like it was overkill and nobody (at the polling station) really knew what they were doing,” Lawson told the newspaper.

A poll worker approached Lawson and made the request, referring to Connecticut law against electioneering at a polling location. Lawson said she didn’t believe that interpretation was accurate but went along with the request anyway, according to this account. She also added that she did not ask to speak to the poll worker’s manager.

Had she done so, however, Lawson might have very well found herself surprisingly vindicated.

Southbury Registrar of Voters Joseph Abruzzi, a Republican, said that if he was made aware of the issue he would have allowed Lawson to wear the shirt featuring the likeness of the late liberal Supreme Court justice and feminist icon.

Abruzzi’s interpretation of the law is likely the correct one.

[N]o person shall solicit on behalf of or in opposition to the candidacy of another or himself or on behalf of or in opposition to any question being submitted at the election or referendum, or loiter or peddle or offer any advertising matter, ballot or circular to another person within a radius of seventy-five feet of any outside entrance in use as an entry to any polling place or in any corridor, passageway or other approach leading from any such outside entrance to such polling place or in any room opening upon any such corridor, passageway or approach…

Additionally, registrars are given wide latitude to interpret how those electioneering laws are enforced in the Nutmeg State.

Here, even though Ginsburg was appointed by Democrat Bill Clinton and often sided with the liberal members of the nation’s high court, there’s not much of an argument that any apparel featuring her image or name would qualify as “partisan” under the legal meaning of the term–which refers to a candidate in an election that is contested between political parties.

And wearing a Ginsburg-focused outfit, while perhaps indicative of a certain political orientation, is likely not a dispositive and forthright partisan statement–again, at least in legal terms.

Response to the famed jurist being barred from the polls after death was none too positive.