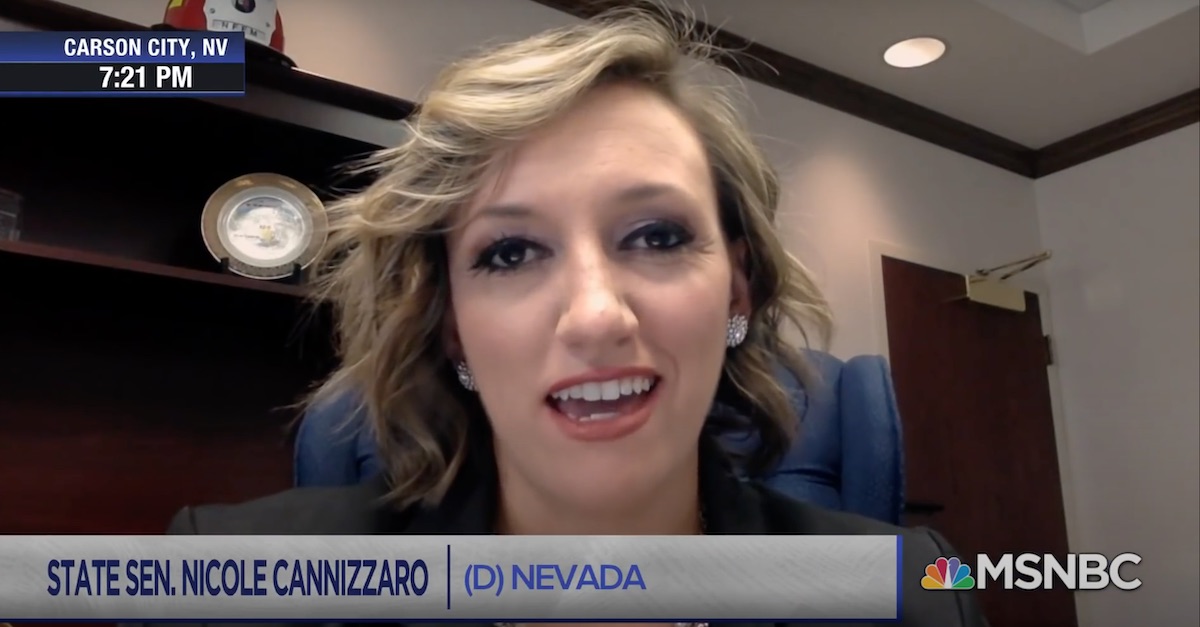 A judge in Clark County, Nevada dismissed a Republican attempt to “void” the election win of Democratic State Senator Nicole Cannizzaro and re-do the election, finding on Wednesday that losing Republican challenger April Becker “put forth no evidence that any discrepancies in Senate District 6 would affect the outcome of the election given that the margin was 631 votes.”

Eighth Judicial District Court Judge Joseph Hardy Jr. granted the Democratic Party intervenors’ motion to dismiss the lawsuit, but the judge dismissed the case without prejudice—meaning Becker can try again if she can cite an applicable statute:

Democratic Senate Majority Leader Nicole Cannizzaro defeated Becker by only 631 votes, a margin that led to the litigation we now discuss.

Judge Hardy reasoned that Becker’s petition to force a revote failed for several reasons. The first was that Becker “cited no law that grants this Court the broad power to invalidate an entire county’s election.”

“A disappointed candidate cannot plead around Nevada’s election contest procedures by characterizing his or her petition as one merely seeking a writ of mandamus. As a result, this Court lacks jurisdiction to proceed, the Petition must be denied, and the action dismissed,” Hardy said.

Even if the court did have jurisdiction, Judge Hardy continued, Becker’s claims “fail on the merits” because the statute she cited did not apply here because “no ballots have been ‘lost and destroyed.'” Becker took issue with the Agilis mail-in ballot processing system.

“Clearly, NRS 293.465 does not apply where a losing candidate disagrees with the process (electronic or otherwise) through which ballots were processed,” Hardy ruled.

And again, even if the court did have jurisdiction, Becker’s evidence—largely “inadmissible hearsay”—did “not come close to meeting” the “heavy burden” to void the election and force a revote, the judge said:

Plaintiff’s allegations are largely based on declarations and newspaper articles. The Court would necessarily need to disregard those declarations as inadmissible hearsay. The Court finds that Plaintiff has offered no evidence sufficient to find any error on the part of either Clark County or Registrar Gloria that would warrant granting the relief sought here. Finally, Plaintiffs have put forth no evidence that any discrepancies in Senate District 6 would affect the outcome of the election given that the margin was 631 votes.