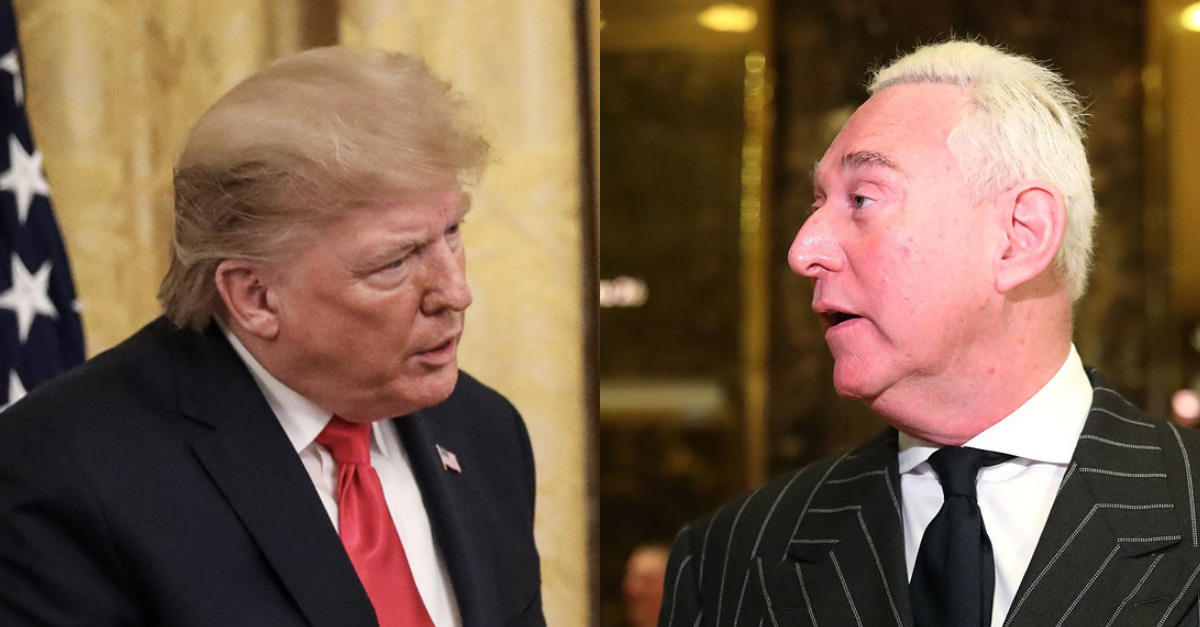 President Donald Trump appears to be listening to his old friend and onetime political advisor Roger Stone when it comes to the upcoming presidential debate.

On Thursday, the 45th president made waves when he told Fox News that he would not participate in a virtual war of words with former vice president and senator Joe Biden.

The Commission on Presidential Debates earlier that same morning announced that the October 15 debate would be conducted virtually “in order to protect the health and safety of all involved.” The precautions are an obvious though unacknowledged response to Trump recently testing positive for the novel coronavirus (COVID-19).

“The second presidential debate will take the form of a town meeting, in which the candidates would participate from separate remote locations,” the nonprofit said in a Thursday morning press release. “The town meeting participants and the moderator, Steve Scully, Senior Executive Producer & Political Editor, C-SPAN Networks, will be located at the Adrienne Arsht Center for the Performing Arts of Miami-Dade County in Miami, Florida.”

During an interview with Fox News’s Maria Bartiromo, the president repeatedly dismissed the concept of a virtual debate–saying the idea was more or less nonsensical.

“I heard that the commission a little while ago changed the debate style, and that is not acceptable to us,” Trump said. “I beat him easily in the first debate–according to the polls I’ve seen.”

The president went on to criticize Fox News’s own Chris Wallace–who moderated the first debate–alleging that he protected Biden throughout and rating Wallace’s performance as a “disaster.”

Bartiromo followed up–noting the commission’s recent decision and asking the president to confirm he would not participate.

“No, I’m not going to waste my time on a virtual debate,” Trump said. “That’s not what debating is all about. You sit behind a computer and do a debate. It’s ridiculous. And then they cut you off whenever they want.”

“They’re trying to protect Biden,” Trump added later. “Everybody is.”

While the president’s threats to avoid a second debate are not necessarily new–Trump has previously said he would skip the debates if he believed the process is not “fair”–they do track somewhat conspicuously with a Wednesday night op-ed in The Spectator penned by none other than Roger Stone.

Stone points out that the commission is a “privately run nonprofit” whose “real purpose is to limit debate.”

George Farah, of Open Debates has called the commission a “corporate-funded, bipartisan cartel that secretly awards control of the Presidential debates to the Republican and Democratic candidates.” The commission was founded in 1987 by the Republican National Committee (RNC) and the Democratic National Committee (DNC)–facts which have frequently led pro-democracy activists and third party candidates to call foul against the system that was actively set up to exclude outside political perspectives.

Stone’s missive attempts to use these longstanding criticisms–previously and serially leveled by Green Party, Reform Party and Libertarian Party members and supporters–in order to bolster Trump’s own reticence about debating Biden a second time.

“The second debate will feature Steve Scully as a moderator,” Stone notes. “Scully worked for Biden, Jimmy Carter’s presidential campaign, and served as staff assistant to the late Sen. Ted Kennedy. How much more partisan can you get?”

“Additionally, the Presidential Commission on debates has announced ‘changes’ in their format which could include giving the moderator the capability to turn off the microphone of either candidate,” the op-ed continues. “This is a set-up with a biased moderator and a disadvantageous format. The President should wisely sidestep.”

Stone goes on to advise Trump against attending the second debate for an altogether unrelated reason: his health. Recalling the 1960 debate between Richard Nixon and John F. Kennedy, Stone notes that Nixon looked “exhausted” due to an illness he was recuperating from at the time and that the debate was, for Nixon, “a visual disaster.”

The Trump campaign later elaborated on the president’s threat to, in Stone’s words, “sidestep” the Miami confrontation.

“The American people should not be deprive of the chance to see the two candidates for president debate face to face two more times just because the Commission on Presidential Debates wants to protect Joe Biden,” a statement from Trump 2020 campaign manager Bill Stepien reads. “As President Trump said, a virtual debate is a non-starter and would clearly be a gift to Biden because he would be relying on his teleprompter from his basement bunker.”

“We agree that this should happen on October 22, and accordingly, the third debate should then be shifted back one week to October 29,” the statement suggests.

Stone was convicted in Nov. 2019 on charges obstruction, witness tampering, and lying to Congress regarding his contacts with WikiLeaks in the lead up to the 2016 election. Federal prosecutors said that Stone lied to Congress to protect the president. Trump commuted Stone’s sentence in July.