Just before his signature block on the final page of the lawsuit is the following verification section [emphasis added]:

Pursuant to 28 U.S.C. §1746, I declare and verify under plenty of perjury that the facts contained in the foregoing Verified Complaint for Declaratory and Injunctive Relief are true and correct.

Here’s a screen shot of the verbiage: 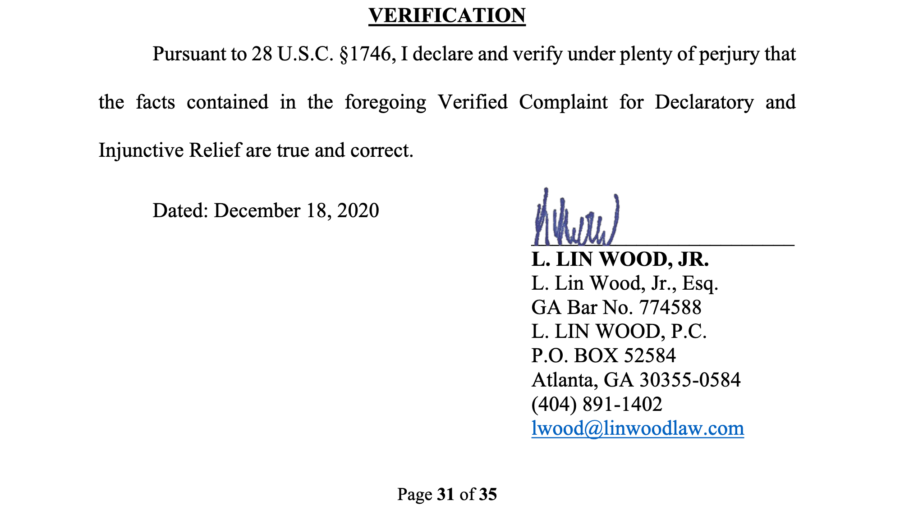 For those unacquainted with legal boilerplate, the phrase is typically rendered: “I declare and verify under penalty of perjury.”  The core phrase is contained in federal law (18 U.S.C. § 1746(2)).

And, as a pro se litigant here, it appears that Wood is responsible for the minor flub and its outsized role in the ensuing narrative.

Commentators had a field day amplifying the apparent mistake.

“Under plenty of perjury.”

Some considered Wood’s use of a synonym for abundant in lieu of the typical verbiage some form of Freudian slip. Others pinned the petite debacle on Wood’s legal assistant—assuming that person was a would-be “troll” or prankster. Others yet suggested the apparent slip-up was evidence that Wood lacks attention to detail.

Another speculative theory that amassed immediate currency in the aftermath of the discovery being widely mocked was that Wood himself intentionally inserted the wrong word either in service of garnering attention or to have the case quickly tossed.

Yet another common refrain was that Wood had simply fessed up to the falsity of the claims contained in the lawsuit itself:

Sometimes, “under plenty of perjury” means exactly what it says. https://t.co/JBkk2fhnDm

But the most common response, by far, was mockery:

“Plenty of perjury” sounds like the title of a Lifetime movie… https://t.co/ZXxHcUGhZM

Under plenty of perjury. Oh my Christ. https://t.co/gvlFDEuf5r

As for the merits of the case, Wood’s lawsuit is an effort to challenge various administrative aspects of the upcoming Senate runoff elections in the Peach State. The filing takes aim at signature verification procedures, how and when mail-in ballots are processed, and the use of electronic voting machines.

Substantively, Wood’s court papers contain Kraken-esque invocation of long-dead Venezuelan leader Hugo Chavez, who emerged from beyond the grave as a 2020 election bugbear who was decidedly not on any political or legal observer’s bracket until Wood and similarly situated GOP attorney Sidney Powell began citing a conspiracy about the Bolivarian Republic of Venezuela’s relationship to Dominion Voting Systems and Smartmatic voting machines.

Smartmatic and Dominion were founded by foreign oligarchs and dictators to ensure computerized ballot-stuffing and vote manipulation to whatever level was needed to make certain Venezuelan dictator Hugo Chavez never lost another election. Notably, Chavez “won” every election thereafter.

As set forth in a Dominion Whistleblower Report, the Smartmatic software was contrived through a criminal conspiracy to manipulate Venezuelan elections in favor of dictator Hugo Chavez.

Regardless of the merits, Wood has had troubles with typos before–he previously misspelled his own name in a filing with the U.S. Supreme Court.

“Every lawyer has found an embarrassing error in a brief after filing,” said Massachusetts-based criminal defense attorney Karen Goldenberg via Twitter. “Forgive yourself. It’s not as bad as this one.”

Shortly after Law&Crime reached out to Wood, but before this article was published, Wood addressed the spelling snafu:

“That was a typographical error,” Wood said via email. “I am imperfect. Just like you.”

“God bless you,” he concluded.

Wood tweeted similarly yet with a nod to the fame to which his foible rose:

Hahaha! I sure proved last night TRUTH of my many admissions that I am imperfect!

Verification to lawsuit filed about GA runoff mistakenly said “plenty” instead of “penalty.”

Verification is last page of complaint. I guess many read the entire complaint to get to it? Good!!! pic.twitter.com/J0OoTawqoU