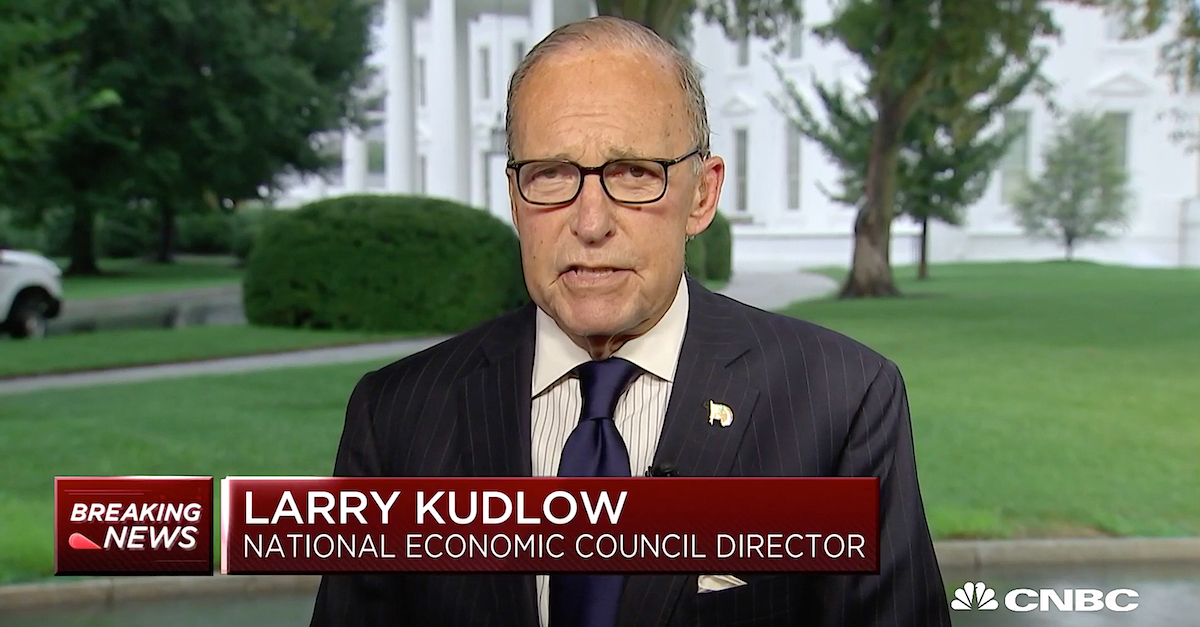 A viral video circulating Thursday shows Larry Kudlow, the Director of the United States National Economic Council, saying “voting rights” are “not our game” in the administration of President Donald Trump. Kudlow made the comments on CNBC’s Squawk on the Street Thursday morning when criticizing Democrats for provisions they want included in a pandemic relief bill.

Various versions of the quote, transcribed in haste on social media, are invariably incorrect; Kudlow’s actual verbiage after transcription by Law&Crime is as follows: “So much of the, uh, uh, Democratic, uh, asks, are really liberal left wish lists, as — we don — we don’t want a — vote —  you know, voting rights, and aid to aliens, and so forth. That’s not our game, and the president can’t accept that kind of deal.”

The appearance with Jim Cramer began with Kudlow praising Cramer by calling him a “wealth guy” and an “American patriot guy” — and not a Marxist. From there, the conversation moved to Kudlow’s perception that America’s unemployment numbers were “trending in the right direction” despite flareups of the pandemic in a number of states. Kudlow said he believed it was necessary for the administration to send Dr. Deborah Birx and “CDC people” into states with COVID-19 flareups to “proclaim or mandate or just lead towards masking and distancing and testing where applicable and, of course, washing your hands and hygiene.”

Cramer then asked Kudlow if America would need additional stimulus. After a verbose answer about how much money was being borrowed, whether it was necessary to borrow, and generally supporting the administration of Donald Trump, Kudlow circled back to the core question: “I don’t think I really want to say much on that.  We’ve acted — President Trump has acted forcefully because we couldn’t reach a deal with the Democrats. They’re asking too much money, three and a half trillion dollars, we’ve already spent over three trillion.”

Then Kudlow slammed Democrats for inserting additional wishes into federal discussions about economic stimulus spending. What resulted was the complaint about “liberal left wish lists” recounted above. The broader interview is here:

Kudlow also elsewhere discussed Trump’s executive order on TikTok — saying that Trump demands that it be “completely secure from the Chinese government.”

The core of the law states that “[a]ll citizens of the United States who are otherwise qualified by law to vote at any election . . . shall be entitled and allowed to vote at all such elections, without distinction of race, color, or previous condition of servitude.”