Meet Jenny Cudd from Midland Texas “WE did break down @SpeakerPelosi‘s office door and somebody stole her gavel and I took a picture sitting in the chair flipping off the camera and that was on Fox News” @FBI pic.twitter.com/3s3aWgOJ9G

A Texas woman who admitted on camera to storming the office of House Speaker Nancy Pelosi has been charged for her part in the D.C. insurrection. Federal prosecutors are going after both Jenny Louise Cudd and co-defendant Eliel Rosa.

In an affidavit, The Federal Bureau of Investigation cited Facebook video in which Cudd said she was present for and participated in events at the Capitol Building.

“I was here today on January 6th when the new revolution started at the Capitol,” she said, according to the FBI.

Supporters of President Donald Trump raided the Capitol Building on January 6 after POTUS continued to claim that he actually won the 2020 presidential election and that it was being stolen from him. Insurrectionists paused proceedings but did not stop Congress from certifying results for President-Elect Joe Biden.

People notably broke into Pelosi’s office. Perhaps it’s no surprise since she is oft a target of Trump’s bully pulpit. In any case, Cudd placed herself at the speaker’s office.

“We did break down the Nancy Pelosi’s office door and somebody stole her gavel and took a picture sitting in the chair flipping off the camera,” she said in the FBI’s account of her video.

Rosa was identified through a picture he posted to Facebook of him and Cudd, according to authorities. The feds said they interviewed him in Midland, Texas (where Cudd once ran for mayor), and he admitted that he and she both entered the Capitol Building on January 6. 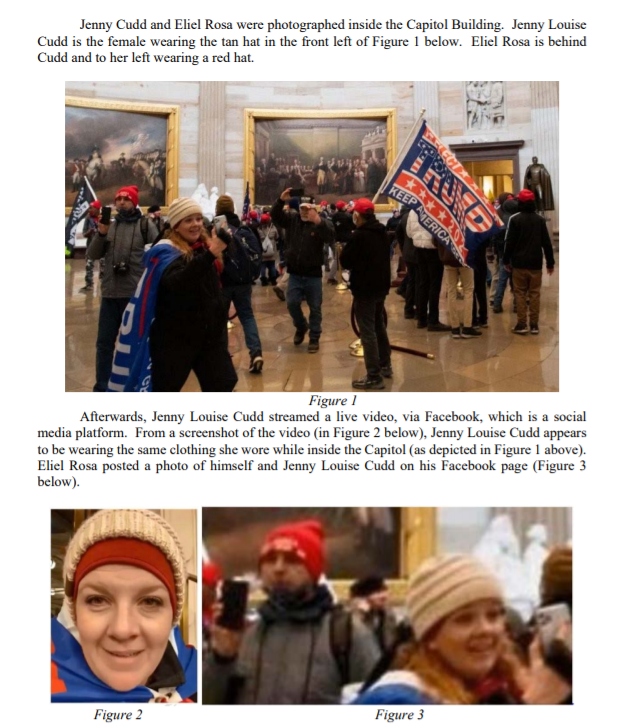 She insisted she did not break the law, but she and Rosa are being charged with entering the Capitol Building and engaging in disruptive behavior to impede government business. From the FBI:

Cudd attorney Don Flanary told the Midland Reporter-Telegram in a Wednesday report that his client will plead not guilty.