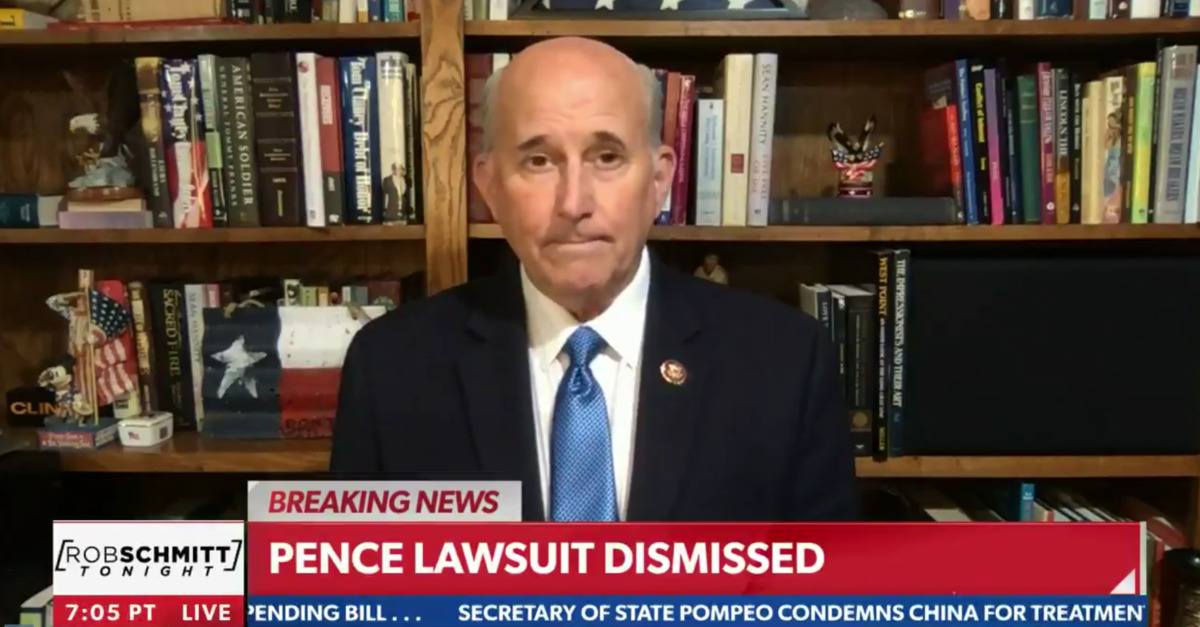 Earlier on Friday, Texas-based U.S. District Judge Jeremy Kernodle–who was appointed by President Donald Trump in 2018–rejected a lawsuit filed by Gohmert and a slate of purported (read:  unofficial or fake) pro-Trump electors against Vice President Mike Pence. That lawsuit, a long shot affair, asserted that Pence had the constitutional power to ignore the Electoral College system’s actual results and essentially gift the 45th president a second term despite the November 2020 election.

Judge Kernodle, in his 13-page decision, dismissed the would-be controversy in a relatively brief order “because neither Congressman Gohmert nor the Nominee-Electors have standing.”

Gohmert addressed the court’s decision during an interview with a Newsmax fill-in anchor on the program Rob Schmitt Tonight.

“This is an example of when the institutions that our constitution created to resolve disputes–so that you didn’t have to have to riots and violence in the streets–when they go wrong,” Gohmert said.

“Bottom line is, the court is saying: ‘we’re not gonna touch this; you have no remedy,’ Basically, in effect, the ruling would be that you’ve gotta go to the streets and be as violent as Antifa and BLM.”

The eight-term congressman from Tyler, Texas went on to balk at the federal court’s decision by noting that the merits of the case were not addressed by Kernodle’s ruling. Gohmert stressed that none of the claims in the lawsuit itself had been “debunked” and said any claims to that effect were “absolute [and] complete lies.”

It is a common legal tactic for judges to dismiss cases on procedural grounds to avoid ruling on constitutional issues.  That the decades-old “doctrine of constitutional avoidance” is applied in many cases, including those not involving elections, is not news; it dates back at least to 1936.

But Gohmert contrasted the Friday evening “procedural things” dismissal of his 2020 election lawsuit with his own career history as a judge by relaying a story of “an extremely controversial” and “dynamite” case that he heard against the advice of his own colleagues on the bench. The congressman did not elaborate on or hint at the details of that case.

The Republican’s Newsmax appearance elicited severe criticism. Many online commentators interpreted the interview as a call for violence.

“Rep. Gohmert doesn’t like the fact that his baseless and bizarre lawsuit was REJECTED and, towards end of this interview, makes a pretty brazen call for people to take to the streets and to go out and be violent,” said Kristen Clarke, president and executive director of the Lawyers’ Committee for Civil Rights Under Law said via Twitter. “Gohmert should be censured for this.”

“This SHOULD lead to an Ethics Committee investigation and sanctions,” tweeted Democratic Party attorney Marc Elias.

Others called for Gohmert not to be seated in the next U.S. Congress, accused him of violating the Sedition Act of 1798 and called for him to be indicted. None of those suggestions and desires, however, are likely to be pursued.

Gohmert went on to say that he “still believes in the court system” by citing his former experience as both a litigant and judge. Gohmert previously served as the chief justice on the Lone Star State’s 12th District Court of Appeals.