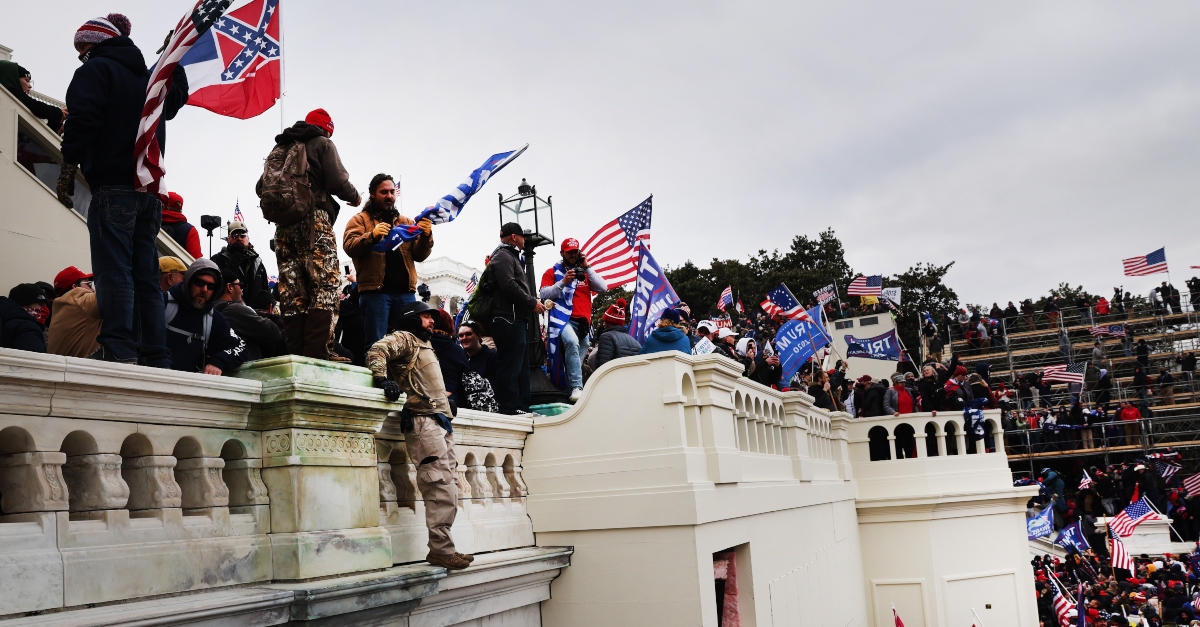 From Getty Images: “Thousands of Donald Trump supporters storm the United States Capitol building following a “Stop the Steal” rally on January 06, 2021 in Washington, DC. The protesters stormed the historic building, breaking windows and clashing with police. Trump supporters had gathered in the nation’s capital today to protest the ratification of President-elect Joe Biden’s Electoral College victory over President Trump in the 2020 election.”

The Department of Justice announced on Friday that 13 people were charged in federal court in connection with the post-Trump rally violence and chaos at the United States Capitol Building two days ago.

Some of these names have been previously reported. You may recognize 60-year-old self-described white nationalist Richard Barnett because we certainly do. He was arrested after admitting on camera that he was in the office of House Speaker Nancy Pelosi, taking an envelope, and leaving a note in which he called her the b-word. He, the 12 other defendants, and other supporters of President Donald Trump raided the Capitol Building on Wednesday as POTUS continued to lie that the 2020 presidential election was stolen from him.

Federal authorities cited pictures and video putting Barnett at the scene. This defendant is charged with knowingly entering or remaining in any restricted building or grounds without lawful entry; violent entry and disorderly conduct on Capitol grounds; and theft of public money, property, or records.

In other Pelosi-related news, Cleveland Meredith was charged with allegedly making interstate threats to the Speaker.

Another defendant of note is Alabama resident Lonnie Coffman, 70. The DOJ said that he had unregistered guns, and also had 11 Molotov cocktails in his pickup truck. Here’s how the feds described the discovery of the incendiary devices in the affidavit:

…officers recovered the following items in the bed of the pickup truck in close proximity to one another: (i) eleven mason jars containing an unknown liquid with a golf tee in the top of each jar, (ii) cloth rags, and (iii) lighters. Upon finding these materials, bomb technicians observed that the items appeared to be consistent with components for an explosive or incendiary device known as a “Molotov Cocktail.” Based on this discovery, additional personnel were called to the scene, including the United States Capitol Police Hazardous Materials Team. A preliminary test by the United States Capitol Police Hazardous Material Team determined that the liquid in the mason jars was an igniting substance and that it had a spectrograph profile consistent with gasoline.

Coffman was charged with possession of an unregistered firearm (destructive device) and carrying a pistol without a license.

Mark Leffingwell was accused of striking a law enforcement officer as officials were trying to stop a group who had broken into the Capitol through a window. He apologized after being taken into custody, according to the statement of facts. He is charged with knowingly entering or remaining in any restricted building or grounds without lawful authority; assault on a federal law enforcement officer; and violent entry and disorderly conduct on Capitol grounds.

Maryland man Christopher Alberts was arrested after he was allegedly found during curfew to have possessed a gun and ammunition on the Capitol grounds. The DOJ says he made a court appearance, was released, and was scheduled for a preliminary hearing to take place on January 28.

Joshua Pruitt was first arrested for allegedly snubbing the local curfew, but a D.C. Metropolitan Police investigator said that she recognized him from a Washington Post picture in which he trespassed on the Capitol Building. From the affidavit:

During the interview [with police], PRUITT identified himself as the person depicted in the photograph and stated that he entered the United States Capitol on January 6, 2021, after others had breached the Capitol. PRUITT further stated that while inside the Capitol, he did not engage in any unlawful activity and was only attempting to de-escalate others who had entered the Capitol.

Pruitt is charged with knowingly entering or remaining in any restricted building or grounds without lawful authority.

Florida man Matthew Council was accused of breaking into the Capitol, and pushing back a barrier that included a closed emergency door. Authorities said he pushed a uniformed officer, and was then pepper sprayed by at least one or more other officers. From the affidavit:

While in custody, but prior to being advised of his Miranda rights, COUNCIL spontaneously expressed remorse about pushing the officer and indicated that he did not intend to injure her.

Council is charged with knowingly entering or remaining in any restricted building or grounds without lawful authority and violent entry and disorderly conduct on Capitol grounds.

A group of six people are charged after allegedly being found in the upper level of the Capitol’s visitor center. They refused to leave when ordered by cops, authorities said.

Matthew Council of Hillsborough County and Michael Curzio of Marion County are both charged with ‘Unlawful Entry’.@MyNews13 @BN9 pic.twitter.com/tv5K5Kh4d4

Federal authorities also noted that about 40 people were charged in Superior Court for allegations such as curfew violations, and unlawful entry.

“The lawless destruction of the U.S. Capitol building was an attack against one of our Nation’s greatest institutions,” Acting U.S. Attorney Michael Sherwin said in a statement. “My Office, along with our law enforcement partners at all levels, have been expeditiously working and leveraging every resource to identify, arrest, and begin prosecuting these individuals who took part in the brazen criminal acts at the U.S. Capitol. We are resolute in our commitment to holding accountable anyone responsible for these disgraceful criminal acts, and to anyone who might be considering engaging in or inciting violence in the coming weeks – know this: you will be prosecuted to the fullest extent of the law.”