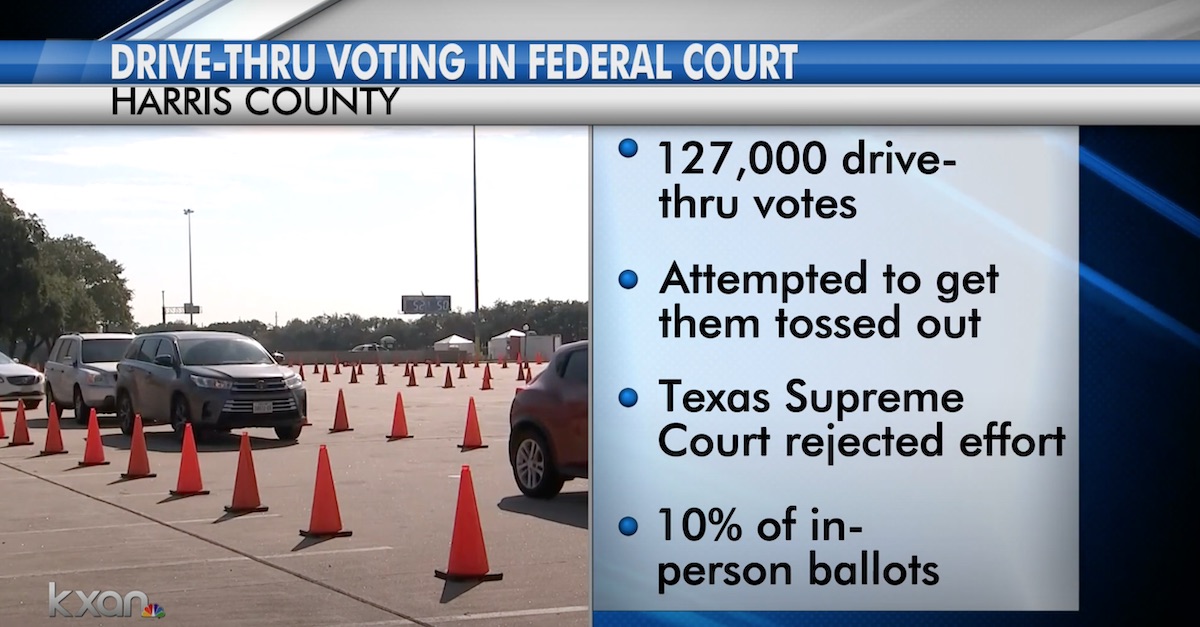 A federal judge in Texas rejected a Republican-led effort to invalidate around 127,000 drive-thru ballots, finding that the plaintiffs lacked standing to sue. The ruling came down one day after the highest court in Texas dismissed a challenge against drive-thru voting and one day before Election Day.

“I’m not happy with that finding,” U.S. District Judge Andrew Hanen, widely described as one of the most conservative federal jurists on the Texas bench, remarked from the bench. “But the way I look at it, the law requires it.”

Judge Hanen gave the Republicans who brought the case an opportunity to appeal his ruling to the Fifth Circuit, all but telling them that he may have ruled differently if they established a right to sue. If the appellate court revives the case, it will return to Hanen’s bench.

It was a rare hearing in the Houston-based courthouse that generated national attention and brought multiple members of the U.S. Congress to the federal judiciary.

At a press conference, some of the most powerful Democrats in the House of the Representative took turns praising the ruling by one of the country’s most right-leaning jurists—at least, the ruling as it currently stands.

“Today was a victory for the American people, for those who, no matter what their party affiliation, could walk in dignity because their vote was counted,” Rep. Sheila Jackson Lee, a Democrat from the 18th district of Texas, said at a press conference. “Let’s not have any more foolishness that continues.” 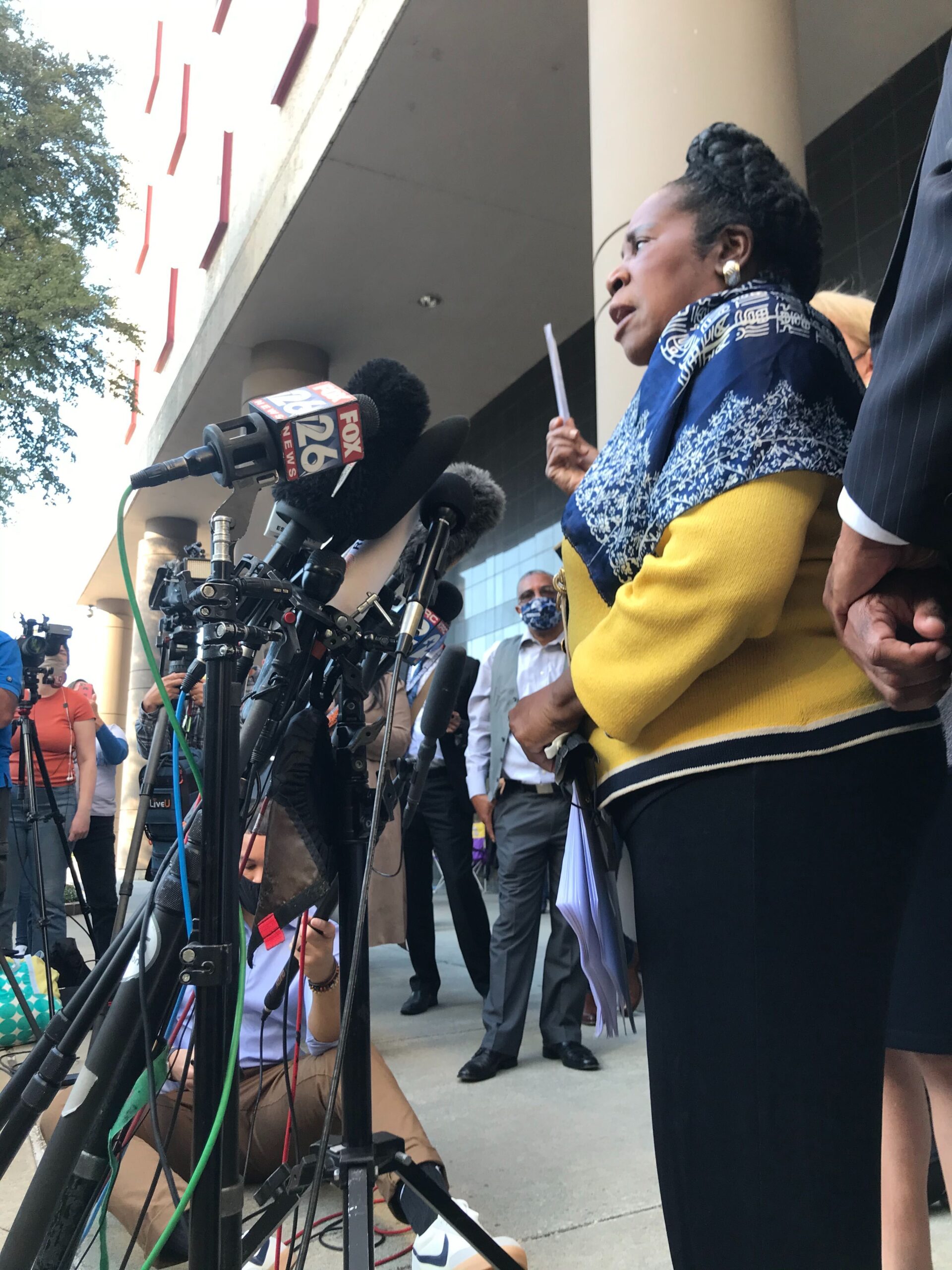 Rep. Sheila Jackson Lee, a Democrat from the 18th district of Texas, holds a copy of the Constitution outside of Houston Federal Court, Image via Adam Klasfeld/Law&Crime

“I think the major point that should be made today is that we have a constant barrage of unfortunately frivolous lawsuits that are done to intimidate voters, first time voters, young voters, elderly voters, people who are infirm, who are trying to vote,” Jackson Lee noted.

Two other Democratic representatives echoed those sentiments, including one who was a prominent figure in President Donald Trump’s impeachment.

“I think that drive-thru voting is a keeper,” said Rep. Sylvia Garcia, a former judge whom Democrats tapped to lay out the case for Trump’s removal at the Senate trial. “It’s one of those things that we decided to do during this pandemic, but I think it’s something that the public will demand.”

Garcia recounted stories of her constituents who made use of drive-thru voting, including a woman who had three children but no daycare.

Though the lawmakers who celebrated the ruling were Democrats, Rep. Al Green said the subject of the hearing should not be a partisan issue.

“I believe that this is not about Democrats,” Green said. “It’s not about Republicans. It is about our participatory democracy.”

Participating in the judicial process was difficult for the public, at first. The hearing had been plagued by barriers to press and public access, as reporters were initially prevented from entering the courtroom and a remote access line was barely audible—when it worked at all. Judicial districts across the United States have been scrambling to keep courtroom access uninterrupted in the wake of the coronavirus pandemic, balancing the Constitutional mandates of open courtrooms with the public-health interest of physical distancing.

The Southern District of Texas expanded access hours into the proceedings, leading to a flood of public interest that brought on some 500 people listening to the hearing as the judge recited his ruling after 2 p.m. Houston time.

Using a colorful expression in a Texas courthouse, one of the attorneys arguing against the injunction warned of Election Day chaos if the votes were invalidated: “Once the egg has been scrambled it does not make sense to try to put it back into egg. We are talking about a very large scramble of 127,000 votes.”

Attorney David Hobbs, a Harris County resident who voted on the first early voting day on Oct. 13, asserted that the GOP theory of injury is that the drive-thru ballots will be counted. 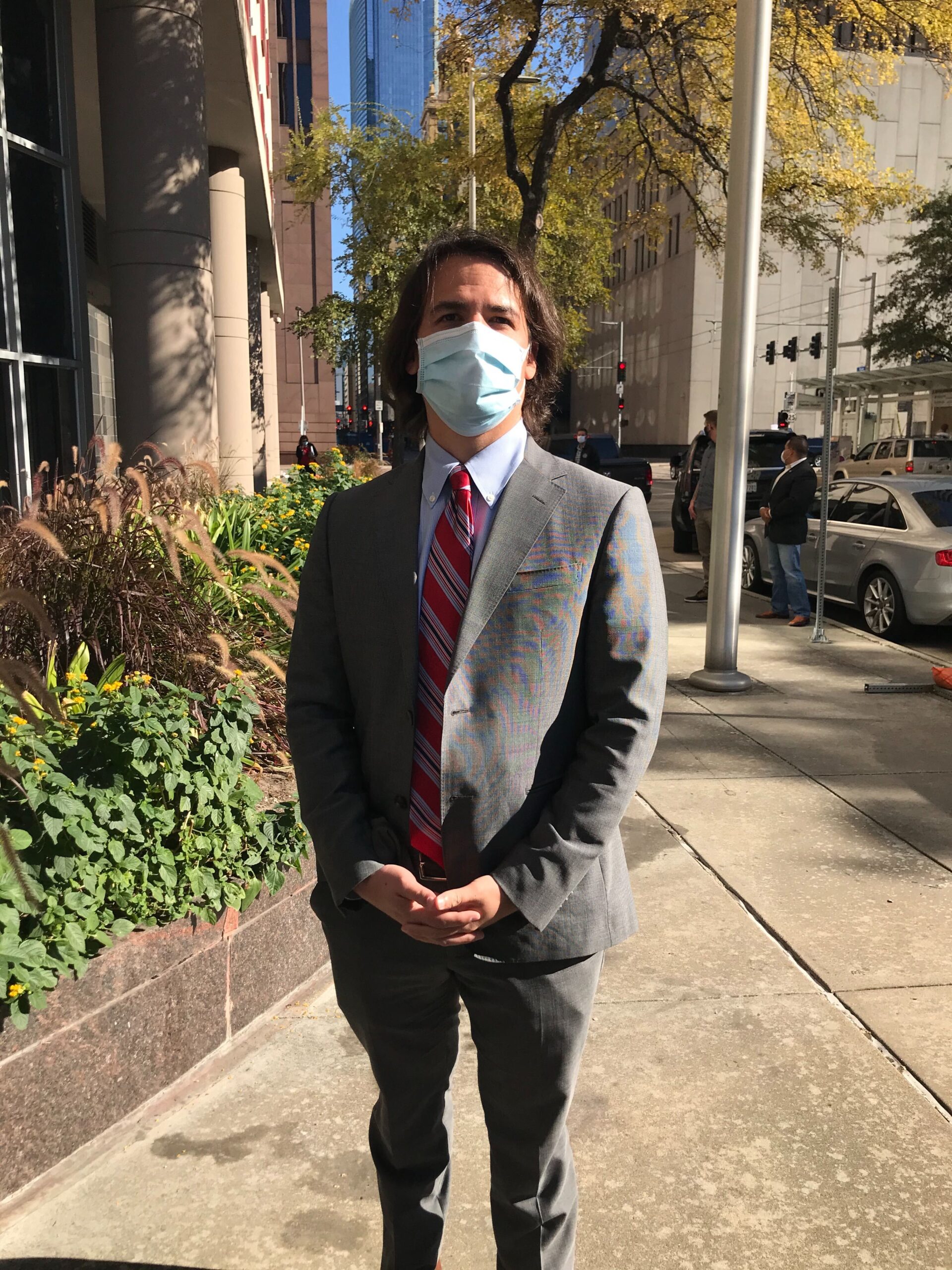 “That’s not an injury,” Hobbs said. “That’s an election!”

“I took an oath to preserve and protect the Constitution and laws of the United States, and of this state,” Hollins said outside of the courthouse after the ruling. “And Judge Hanen, when he became a federal judge, he took that same oath. And that’s why today, he upheld the law.”

Texans started hitting the polls in droves on Oct. 13, the date when early voting began.

At more than 9.7 million early ballots, Texas became the second state last week to surpass its 2016 voting percentages before Election Day. (Hawaii was the first.)

The Texas Republicans behind the lawsuit want to take a 126,000-vote slice out of that record in Harris County, which has seen a surge in voting following a $31.4 million investment in election infrastructure.

“By indiscriminately encouraging and allowing any and all Harris County registered voters to cast their ballots via curbside drive-thru voting, Defendant is violating both federal and state law, and plaintiffs will suffer irreparable injury if such ultra vires action is not stopped,” attorney Jared Woodfill wrote in an 18-page complaint.

Every state court that heard the argument in Texas disagreed, leading the Republican-led quest to discard more than a hundred thousand votes to migrate to federal court.

Their lawsuit landed on the docket of U.S. District Judge Andrew Hanen, a George W. Bush appointee described by The Washington Post editorial board as “ultra-conservative.”

Attorney Marc Elias, an election lawyer for Democrats and former general counsel for Hillary Clinton during her past presidential candidacy, has pushed back against this and other Republican-led efforts to stymie the expansion of mail-in ballots and other measures designed to help U.S. voters cast their ballots safely during a pandemic.

Together with his colleagues at the law firm Perkins Coie, Elias noted that his opponents turned to federal courts after the highest court in Texas found their claims meritless enough to dismiss without comment.

“Worse yet, plaintiffs ask this court to throw Texas’s election into chaos by invalidating the votes of more than 100,000 eligible Texas voters who cast their ballots at drive-thru voting locations at the invitation of county officials and in reliance on the Texas Supreme Court’s decision to allow drive-thru voting to proceed,” Elias’s co-counsel Skyler Howton, from the Dallas office of the firm Perkins Coie, wrote in an 11-page motion to intervene.

The lack of courtroom access was evident before the hearing, as dozens protested across the street from the courthouse, chanting “Count Every Vote.”

“My two daughters drove in from college in Mississippi to vote in their very first election,” Candis Houston, the president of the the Aldine American Federation of Teachers, told Law&Crime during the protest.

Houston and her daughters chose drive-thru voting because one of her children tested positive for COVID-19.

Drive-in voting is a go-to option for many Texans who would otherwise be unable to go to the polls due to illness. An attorney for one of the intervenors represented a woman with stage 4 uterine cancer.