‘A Terrorist Is a Terrorist’: House Homeland Security Chair Wants Ted Cruz and Josh Hawley on the No-Fly List 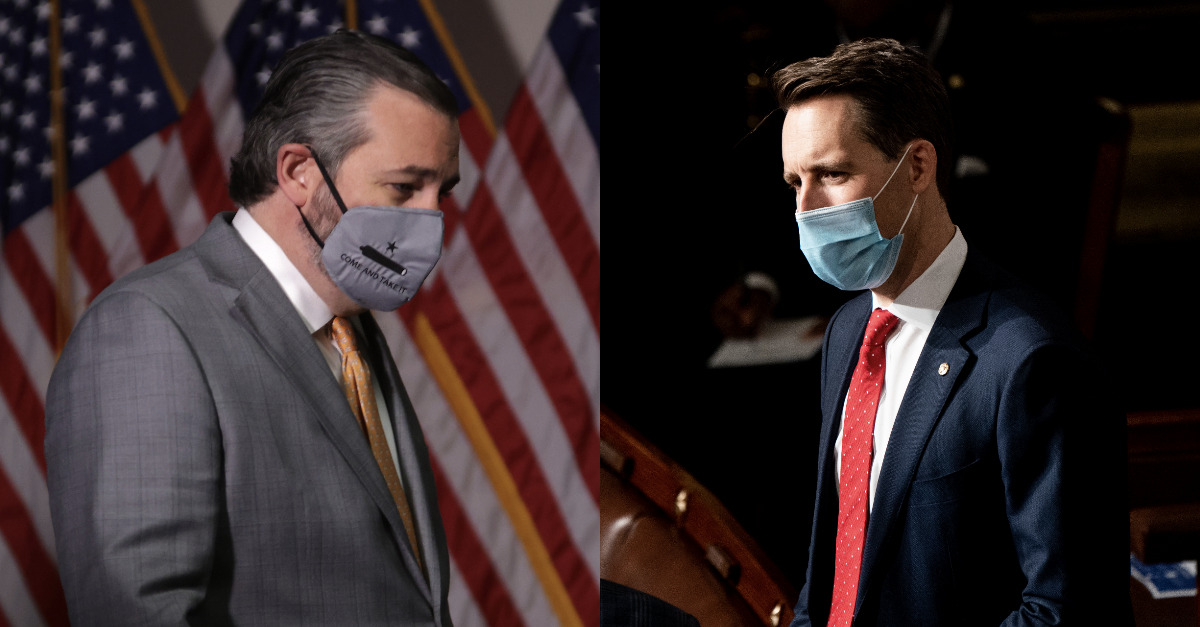 The chair of the U.S. House Committee on Homeland Security wants GOP Senators Ted Cruz and Josh Hawley placed on the federal “No Fly” list due to the “actions they participated in” last Wednesday, when the attack on the U.S. Capitol occurred.

Thompson explained that the House has “a protocol” for engaging with the Transportation Security Administration (TSA) and the FBI in order to place individuals on the government’s no-fly list and said that those measures had already been taken with regard to several of the alleged participants in the U.S. Capitol attack. The Mississippi Democrat went on to note that many airlines had also taken additional efforts to institute lifetime bans on the alleged terrorists.

To be clear, those no-fly considerations are currently being hashed out by the FBI’s terrorist screening center. A viral video incorrectly claimed that supporters of President Donald Trump were already placed on the list over the weekend. Those who were stuck in airports following the Capitol attack appear to have only been subject to private bans from various airlines.

“There’s talk about liability for inciting this insurrection falling, maybe, in the laps of Senator Hawley and Senator Cruz and a member of Congress who may have Facetimed or led people to Pelosi’s office,” Madison noted–referring to suspicions about Rep. Lauren Boebert (R-Colorado), a QAnon adherent who appeared to celebrate the mob’s trajectory on social media as they breached and made their way through the national seat of government. “If these folks are found liable, should they be on the no-fly list?”

“Well, there’s no question about it,” Thompson replied. “There’s no exemption for being put on the no-fly list.”

Even a member of Congress that commits a crime, you know, they expel from the body. There are ethics charges that can be brought against those individuals. And people are looking at all this. What Hawley did and what Cruz did was horrible. What—the new member from Colorado, who basically tweeted directions and everything that was going on—that’s not something you do. Somebody said, well she’s new. Well the point is ignorance of the law is no excuse. So if you don’t know, you’ve still done something wrong.

Democrats have excoriated Cruz and Hawley for their actions before and after the attack–with many calling for both Republicans to resign or be expelled from the U.S. Congress.

“Both [Hawey] and [Cruz] have betrayed their oaths of office and abetted a violent insurrection on our democracy,” Sen. Sherrod Brown (D-Ohio) said over the weekend. “I am calling for their immediate resignations. If they do not resign, the Senate must expel them.”

Several additional Democratic senators later echoed Brown’s call for the duo to resign or be fired.

Rep. Alexandria Ocasio-Cortez also called on both senators to resign and said their “craven, self-serving actions contributed to the deaths” via Twitter.

Both Hawley and Cruz responded to the wellspring of criticism via Twitter–complaining about how they were being compared to Nazis. Hawley, who had a book deal shelved over his involvement in the national crisis, also incorrectly complained that his First Amendment rights were being violated. Twitter is a private company; it is not part of the U.S. government. First Amendment violations only occur when the government takes action.

“You fist-pumped insurrectionists and baselessly attacked our elections,” Ocasio-Cortez said in another tweet. “Your actions fueled a riot and you fundraised in the chaos. Five people are dead. Even your GOP colleagues have distanced from your acts. Yet here you are crying over a book deal. You should be expelled.”

It is currently unclear whether sufficient votes exist to expel either Senator from the upper chamber. An effort to expel multiple GOP members of Congress initiated by progressive Rep. Cori Bush (D-Mo.) is currently underway in the U.S. House of Representatives.

It would, under Section 3 of the 14th Amendment, investigate and expel the GOP members of Congress who attempted to overturn the election and incited a white supremacist attack.

Call your rep to sign on. We can’t have unity without accountability.

“There’s suspicion that some of the sympathizers were also employees of the Capitol Police,” he said. “You don’t open the doors and let people in. You don’t take selfies with people who just broke into your job site and put folks at risk.”

The Congressional Black Caucus has voiced those concerns, Thompson said, and was hopeful that newly-appointed Acting Capitol Police Chief Yogananda Pittman would be able to aid investigators as they scoured the department for culpability.

“We believe that that double standard existed on the sixth of January,” he said. “We want to know why. Obviously, we do know why. But somebody’s going to have to tell us why it occurred. Other than the fact that there white people involved and you treat white protesters with kid gloves and black and white protesters you threw the the full faith and power of the government one them to suppress them. It ought to be one policy.”

A hearing on law enforcement’s response to the attack was scheduled for this coming Wednesday, Thompson said.