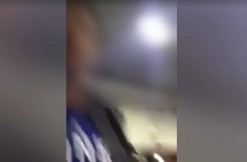 A white disabled veteran says a woman hit him and actually called him a racial slur.

Stewart Hogg is a student at St. Leo University in Florida, so he had been driving there Tuesday when a female driver tailgated him, he told ABC Action News.

“She was really mean,” he said.

The two eventually entered the school parking garage. Turns out she was another student. There, Hog says the woman went up to his car, reached through his window, and smacked him, calling him a “white-ass c—–r.”

Hogg recorded most of it on his cell phone. (The woman’s face is censored by ABC Action News since she hasn’t been charged of a crime.)

But it won’t be enough, police say. They argue that the footage doesn’t show the woman hitting Hogg.

Campus security questioned her, ABC mentions. But according to her, it was Hogg who was the crappy driver — brake checking her. In the affidavit, her version of events ever so closely follows his, but not quite enough. She said she tried to smack the phone from his hands, but never reached into his car. And she’s apparently backed by campus surveillance recordings. The footage never showed her hit Hogg, according to deputies.

Cops are kicking this case down to the State Attorney’s Office for review, but they did recommend simple battery charges, a misdemeanor. It can net offenders up to 1 year of either jail or probation. A $1,000 fine is possible, too.

And Hogg is still livid. “She needs to be brought before a board and excused from campus while this is investigated or at least brought in front of a board and told, ‘Hey, you did something really bad,” he said.

The woman didn’t respond to emails from ABC. As for the University, a spokesperson wrote a statement just to say they wouldn’t comment publicly on an ongoing investigation.