VIDEO: Suspected Drug Smugglers Climb Over Fence From Mexico, Go Back When Spotted by Camera 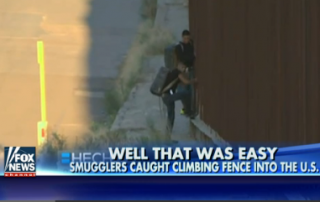 Two young men with backpacks were caught on camera at the U.S.-Mexico border on Sunday, climbing over the fence between the countries and landing on American soil. Both of them are suspected of trying to bring drugs into the country. Once they got here and realized they’d been seen, they climbed right back up and over to Mexico.

Brandon Judd, president of the National Border Patrol Council, told Fox News that this happens all the time, and he believes Donald Trump can stop it if he becomes President.”I’ve seen the lawlessness on the border, I’ve chased aliens through the brush, through the mountains, and he has seen how that affects the morale of border patrol, not being able to do your job. And he wants to take those handcuffs off.”

Not everyone feels the same way. Pete Saenz, mayor of Laredo, Texas, a populous city on the border, told Fox News in March that Trump’s plan to build a wall along the border is impractical and offensive to Mexico.