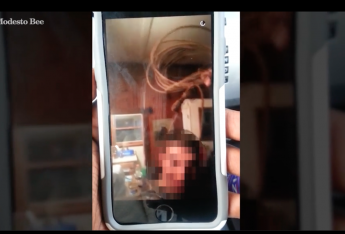 Two 16-year-old California high school students were arrested on Monday in connection with the making of a racially charged Snapchat video that authorities say included a death threat directed at an African-American student at the high school.

The brief video was allegedly posted on March 25 when the high school was on Easter break.  It features a white teenager with what appears to be a hangman’s noose around his neck saying, “You must die motherf***er.”  The student with the noose around his neck and a second student who is apparently holding the camera both laugh as one shouts out the name of an individual who police say is an African-American classmate of the students at Central Catholic High School.  The video then cuts to a first-person angle of a handgun being fired.

The Modesto Bee identified that student as Noah Porter, 18, who reportedly gave the paper permission to use his name.  The paper also obtained a copy of the video that has been posted online.

Modesto authorities recovered a firearm during a search of the homes of the two 16-year-old students on Monday, but they did not say whether the firearm they recovered was the same one used in the video.  The two students were booked into Stanislaus County Juvenile Hall on felony charges of criminal conspiracy, committing a hate crime and making terrorist threats, according to Modesto Police Capt. Brian Findlen.

“We have identified the male juvenile in the video and we believe that the other male that was arrested was involved in production or distribution of the video,” Findlen told reporters.  However, authorities did not release the names of the students, presumably because they are juveniles.

Jacq Wilson, an attorney serving as a spokesman for the Porter family released a statement on the arrests on Monday.

There are no winners in this. An act of ignorance has forever changed a young man’s life. By the Modesto Police Department taking swift action to hold the wrongdoers accountable, it sends a message that hate crimes and death threats will not be tolerated in this community. It does not matter if you are rich or poor, black or white, young or old, if you commit a crime in Modesto you will be held accountable.