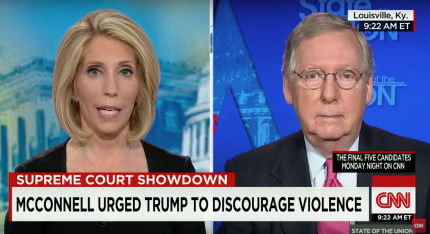 Senate Majority Leader Mitch McConnell doubled down on Sunday on his promise to not hold confirmation hearings for Merrick Garland, President Obama’s nominee to fill the Supreme Court seat vacated after the sudden death on Antonin Scalia.  In addition to reaffirming his prior position, McConnell added that he had also 100% ruled out confirming Garland in a lame duck session after the November presidential election.

McConnell described it as a tradition and then went on to cite the “Biden Rule” as well as prior remarks made by Harry Reid  and Chuck Schumer about the Senate getting to decide whether a nominee gets a vote.  McConnell told Bash that he believed this is what voters want and said he was not concerned that following this tradition would harm Republicans up for election in 2016.

McConnell then pivoted to the merits of the nominee himself, saying that although Obama considers Garland to be a moderate, the nomination opposed by the NRA and the National Federation of Independent Business. McConnell also cited a New York Times article that stated Garland would move the court far to the left.

Bash then asked McConnell whether he would reconsider his stance in the event Hillary Clinton or Bernie Sanders won the election.  Again, McConnell stood his ground and said, “I cannot imagine that a  Republican majority congress, in a lame duck session after the American have spoken, would want to confirm a nominee opposed by the NRA, NFIB, and that the New York Times says would move the court dramatically to the left.  This nomination ought to be made by the next president.”