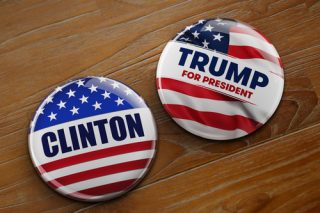 After Wednesday night’s debate, the pundits and various media personalities are now focused entirely on Donald Trump‘s apparent admission that he won’t commit to accepting the election results. Well, precisely, he told Fox moderator Chris Wallace, “I will look at it at the time. I will keep you in suspense.”

The reaction has been intense. The Associated Press opened their article about the debate by saying that Trump threatened “to upend a basic pillar of American democracy.’  CNN’s David Gregory said his comments, “undermine our democracy, it’s way outside the tradition of our democracy and presidential races.” University of California-Irvine election law professor Rick Hasen said, “Trump’s gambit may be planned or, more likely, he’s just making it up as he goes along. It is no joke. Our democracy is a fragile thing which depends upon accepting the rules of the game.” Clearly, this is serious stuff.  And Trump’s unwillingness to commit to respecting the election results is pretty unprecedented.

But from a purely legal standpoint, what actually happens if come November 8, Donald Trump refuses to accept the election results? Honestly, depending on the circumstance, most likely not much of anything.   Trump could file lawsuits, and challenge the various results in different states. He could even organize protesters to hit the streets. However, in most situations, the U.S. Constitution is pretty clear on telling us who would win. Bush v. Gore in 2000 gave us a rare example of what could happen if the popular vote in a state is very, very close. But the chances of having another situation like Florida are remote.  In fact, the latest polls have Clinton ahead from 4 to 11 points.  However, we are still a few weeks away from Election Day. So let’s go through a few potential scenarios.

If Hillary Clinton wins the popular vote and the electoral college, there is no question that she will become President, even if Trump refuses to concede, or accept the election results.

The U.S. Constitution states in Amendment XII, ratified by the states in 1804:

“The person having the greatest number of votes for President, shall be the President, if such number be a majority of the whole number of Electors appointed; and if no person have such majority, then from the persons having the highest numbers not exceeding three on the list of those voted for as President, the House of Representatives shall choose immediately, by ballot, the President.”

So if Clinton wins 270 or more of the 538 electoral votes, then there really is no wiggle room for Trump here, Clinton will win.  If Trump doesn’t like it, he can send his supporters to the streets or file legal action, but a court would abide by the Constitution and decide in Clinton’s favor.

What happens if Trump wins the popular vote and Clinton wins the Electoral College? Well, legally speaking, Clinton would most likely win. You can bet, though, that Trump would protest if this happened. However, of course, according to the U.S. Constitution, the President is not chosen by a nation-wide popular vote but is determined by the electoral college.  This has happened in three elections in American history: the Hayes/Tilden election of 1876, the Harrison/Cleveland election of 1888, and, of course, Bush/Gore in 2000.  Of course, Bush v. Gore was slightly different.  In Florida, the elections board  reported that Bush won with 48.8% — which triggered a statutorily-mandated automatic recount. A whole mess ensued after that with the U.S. Supreme Court ultimately giving the victory over to President George W. Bush by staying Florida’s recount.

So if we were in a situation where the popular vote in a state was as close as Florida, you can bet Trump would pursue legal action. He might even have a leg to stand on. In that case, much like what happened in Bush v. Gore, the courts would decide whether to intervene, and if they do, in what capacity.

However, generally speaking, a tie is statistically a very remote possibility. But if a state was tied between Trump and Clinton,  state law would govern the procedures for what would happen next — most likely a recount. Under federal law 3 U.S.C. Section 5, the states make the ultimate determination on the selection of electors. If there is some question over the state’s procedures for appointing electors or recounting, this could end up in court again.

What happens if neither Trump nor Clinton wins the 270 electors? Well, under the Constitution, there is an answer as well. The process would go like this:

So, while Trump may say he won’t accept the election results, and he might even hire a team of lawyers to fight it, in all likelihood, our Democratic process will determine who wins, not Trump.  The point is there is a procedure for almost every likely situation. Of course, there are always exceptions and unforeseen circumstances like hacking or (the very unlikely possibility) of widespread voter fraud. And you can’t bet, if that happens, Trump will jump on the opportunity to question the results.