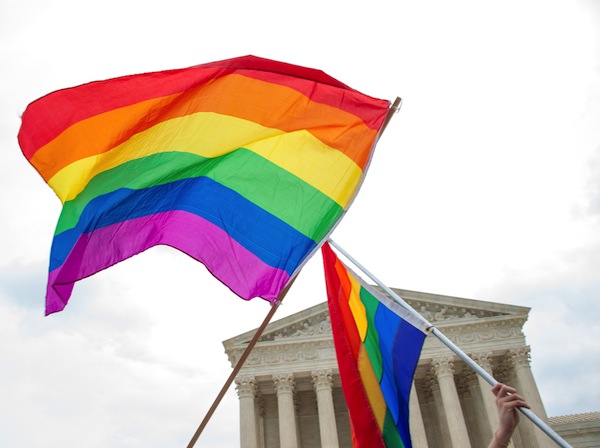 Guys, you aren’t actually going to even believe this. There are still people trying to get rid of same-sex marriage. If you’re all, “didn’t we already fight about this a long time ago?” you’d be right. Except that news apparently hasn’t hit Arkansas just yet. One of its esteemed legislators just filed a Senate Joint Resolution requesting the United States Congress to start working on a Constitutional Amendment defining marriage as the “union of one man and one woman.” How positively late-90s of him.

You’d think that the Arkansas state legislature would have better things to do these days, but apparently, not so. State Senator Jason Rapert (yes, that’s his real name) thinks it’s a good idea to call an entire Constitutional Convention over this issue. That’s right. We should get everyone together and rewrite the Constitution of the United States – not to clarify the limits of executive power, not to strengthen freedom of the press, not to guarantee equal rights for women – but to ensure that only heterosexual people can get married.

When asked his rationale for dredging up an issue that even President Trump said is “done,” Rapert complained that, “a court just out of the clear blue decided to carve this new right.” To clarify, by “a court,” Rapert meant the United States Supreme Court, and by “out of the clear blue,” he must have meant “after specifically finding that the right to marry the person of your choosing is protected by tons of Constitutional precedent.”

Frankly, it’s infuriating to even address legal arguments in favor of same-sex marriage, but in the interest of putting things into words small enough for the Arkansas legislature to understand, I’ll lay it out a bit. To start, in every single Supreme Court case basically ever, the court has held that the right to marry is protected by the Constitution. When the question was whether it’s legal to ban interracial marriage, the answer was, “no.” When the question was whether it was legal to deny prisoners the right to get married, the answer was, “no.” In other words, marrying who you choose isn’t a privilege, like getting a driver’s license or owning a home. It’s a right. If you are a person and you are in the United States, you get to do it. End. Of. Story.

Furthermore, the Supreme Court has also been clear that marriage isn’t just any old right, but is a fundamental right. There’s no hard and fast list of which rights are “fundamental” and which ones are just garden-variety rights – but the fundamental ones are sacrosanct – and the right to marry is one of those. It shall not be messed with. And don’t take my word for it. Check out the Supreme Court’s pretty clear language:

“the right to marry is fundamental because it supports a two-person union unlike any other in its importance to the committed individuals… Same-sex couples have the same right as opposite-sex couples to enjoy intimate association, a right extending beyond mere freedom from laws making same-sex intimacy a criminal offense.”

To recap, the right to marry is a fundamental right. And we all know that the Fourteenth Amendment’s job is to ensure that states (looking at you guys in the South, here) do not take it upon themselves to take away the people’s rights.

For years, those who consider LGBTS to be less worthy of freedom than other Americans have been trying to find a way to get around the rule clarified in Loving v. Virginia. In that case, in which SCOTUS unanimously struck down a law criminalizing interracial marriage, the majority held:

“There can be no question but that Virginia’s miscegenation statutes rest solely upon distinctions drawn according to race. The statutes proscribe generally accepted conduct if engaged in by members of different races.”

Substitute “sexual orientation” for “race” you’ve basically got the idea of what should clearly be the situation for same-sex marriage. But crafty bigots came up with a way to get around Loving’s rule; redefine the word “marriage” itself, and now the legal question changes. Instead of the issue being “does the law protect gay people’s right to marry the same as it protects straight people’s right to marry,” the question changes to “straight people have a right to marry, but do gay people have a right to do this totally other thing that is exactly like marriage, but is called something totally different?” See how that’s confusing? That’s what Arkansas is banking on.

Arkansas’ best and brightest is apparently this Rapert guy, who believes that it’s so important to prevent LGBTs from marrying that we should rewrite the Constitution to do so.   Never mind that the Supreme Court specifically found that one major reason for protecting everyone’s right to marry is that “the right to marry is that it safeguards children and families and thus draws meaning from related rights of childrearing, procreation, and education.” Safeguarding children and families isn’t Senator Rapert’s concern. He’s much more enamored with the idea of doing what the people want.

He defended his discriminatory position on marriage on a local television interview, where he said, “I think the country now knows the silent majority is out there and they spoke during the 2016 election.” Rapert’s populist views only go so far, though. In 2016, Arkansans (including the majority of Rapert’s own constituents) voted to legalize medical marijuana, but last Friday, Rapert filed a bill to delay the implementation of the corresponding law. When the local news asked him to defend the absurd hypocrisy of substituting his own judgment for that of everyone from SCOTUS to his own state’s voters, he threatened to end the interview and fell back on the incredibly lame, “There is no hypocrisy in standing up for what you believe in.”

Oh, okay. Well, as long as Rapert believes it’s fine to discriminate against people based on their sexual orientation, I guess it must be fine.