Fmr. Miss Universe May Have a Defamation Case Against Trump for His Tweetstorm 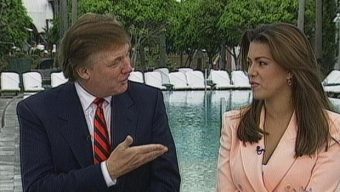 Donald Trump’s relationship with defamation is becoming dizzying. Just a few weeks ago, the Trumps sued The Daily Mail for $150 million over a story that discussed the potential campaign fallout over allegations that Melania Trump had worked as an escort. Trump’s lawyer, Charles Harder (of Gawker fame), said that the story was “100% false and tremendously damaging to [Melania’s] personal and professional reputation.” Such outrage certainly paints the picture of a staunch gatekeeper of truth in media. Combined with Trump’s many promises to “open up libel laws,” one could make reasonable inferences that Trump is actually familiar with those laws, and that he is committed to protecting the reputations of those who may be victims of defamation.

A quick primer on the tort of defamation. Defamation is comprised of “libel” and “slander” (relating to written and spoken statements, respectively). A person has been defamed when a false statement is publicized about him or her, when that statement was presented as fact (as opposed to opinion or analysis), and when that statement results in financial harm to the victim. If the victim is a public figure, there is an additional requirement that the statement was made with “actual malice” ( knowledge that the information was false or with reckless disregard of whether it was false or not.)

While Trump seems to operate with an incredibly liberal definition of libel as a potential plaintiff, he’s wildly cavalier about statements that could affect him as a libel defendant. Overnight, Trump sent out these tweets:

Wow, Crooked Hillary was duped and used by my worst Miss U. Hillary floated her as an “angel” without checking her past, which is terrible!

Using Alicia M in the debate as a paragon of virtue just shows that Crooked Hillary suffers from BAD JUDGEMENT! Hillary was set up by a con.

Did Crooked Hillary help disgusting (check out sex tape and past) Alicia M become a U.S. citizen so she could use her in the debate?

The tweets clearly state that former Miss Universe Alicia Machado 1) was in a sex tape; 2) was “the worst Miss Universe;” and 3) that Hillary Clinton may have helped Machado become a U.S. citizen. Let’s just take those statements one at a time. The most actionable statement, from a defamation standpoint, is the allegation that Machado was in a sex tape. It’s clearly a statement of purported fact, and was clearly made publicly. As a model and actress, Machado could easily suffer damage to her reputation and resulting financial consequences from the publicizing of that statement. And even if Machado were considered to be a public figure (which is unlikely, because she’s not famous enough), the tone of Trump’s tweets could very likely support an inference that he was acting with “actual malice.” Of course, Trump’s statements wouldn’t be defamatory if they were true – but so far, there’s nothing to indicate that any sex tape starring Machado actually exists. Machado did star in the Spanish reality program La Granja, in which there was a night-vision scene (that may not have even included Machado) showing a couple moving in bed under covers. But “sex tape” has a colloquial meaning, and a grainy segment on a reality show isn’t that meaning. Unless Trump can produce an actual sex tape starring the former Miss Universe, he may want to consider retracting those tweets.

Machado has even responded herself, saying:

“The Republican candidate and his campaign team are again generating attacks, insults and trying to revive slanders and false accusations about my life. All this in order to intimidate, humiliate me and throw me off balance again. The attacks that have emerged are slander and lies cheap generated with bad intentions, which have no foundation that have been spread by sensationalist media. “

Lastly, there’s Trump’s suggestion that Hillary Clinton helped Machado obtain citizenship. Phrased as a question, it skirts the edges of the typical definition of defamation. But even if such a communication isn’t legally actionable, it’s still pretty indicative of Trump’s irresponsible choices. Absent credible proof that Clinton had any involvement with Machado’s immigration, there is simply no basis for such a suggestion. Such would be my analysis for any person communicating in any venue. When the communicator is a presidential nominee with global influence, the constant dances go from “irresponsible” to “downright reckless.”

Inconsistency has become the core of the Trump brand. And defamation is just another arena in which we can all look on and see that inconsistency at work.   It’s not often we see someone who so outraged at the injustice of publicly-communicated falsehoods that he hires top-dollar lawyers, files actual lawsuits, and promises sweeping changes to tort law – and then engages in precisely the behavior he has railed so hard against.