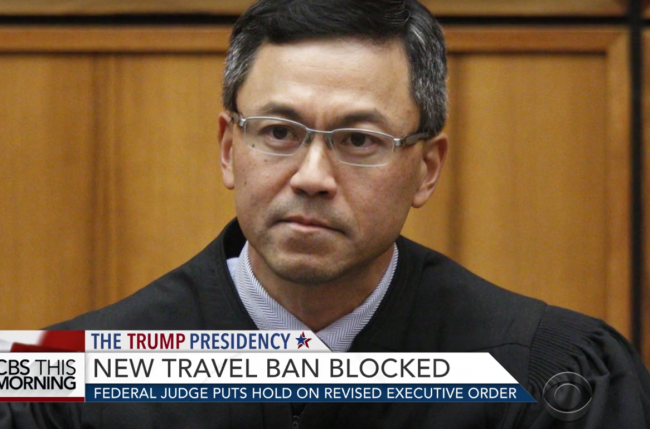 The federal judiciary is rapidly emerging as a thorn in the side of Donald Trump.

The updated decision by U.S. District Court Judge Derrick Watson now means that the travel ban will be put on ice unless it is reinstated by higher appeals judge.

Trump’s second travel ban came after a three-judge panel issued a similar stay to an earlier version which temporarily halted the immigration and travel from citizens of seven majority Muslim countries to the United States. The original order also included preferential treatment for Christian refugees seeking resettlement in the United States. The second ban reduced the ban to only six countries and dumped the overt religious stipulations, but it still was not enough for Judge Watson

“The Court will not crawl into a corner, pull the shutters closed, and pretend it has not seen what it has,” Watson wrote in his opinion. ‘The Executive Order runs afoul of the Establishment Clause, where ‘openly available data support a commonsense conclusion that a religious objective permeated the government’s action.”

The action from Judge Watson now all but ensures the matter will move up to the 9th Circuit Court of Appeals if the Trump Administration wants to preserve the ban.