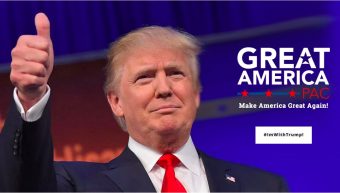 LawNewz.com has learned that the Washington D.C. based non-partisan Campaign Legal Center is expected to file a complaint on Thursday with the Federal Election Commission against a Trump Super PAC for allegedly soliciting foreign donations from a “fictitious” Chinese donor.

Jesse Benton, a man who identified himself as a consultant with the Great America PAC, offered to pass along the money from the “Chinese” donor, according to the the undercover video. “All of it,” he said on the tape. At the time, Benton said he was with the Super PAC. However, according to The Telegraph, the Super PAC’s co-chairman, Eric Beach, and the PAC later denied that he had worked for it at all since May

“After viewing the recordings, it is clear Mr. Benton and Mr. Beach were soliciting an illegal contribution and explaining how to launder the foreign money to the super PAC to avoid detection,” said Larry Noble, general counsel for the Campaign Legal Center in a statement.  “While no money changed hands, the solicitation of the money itself is illegal and the FEC must investigate.” Noble also served as General Counsel of the Federal Election Commission for 13 years.

Interestingly, in May, Benton pleaded guilty in an unrelated campaign bribery case involving the Ron Paul 2012 Presidential Campaign.  Dan Backer, an attorney for the PAC, told The Telegraph, that “[t]he PAC has never … solicited or accepted contributions from a foreign national or entity” and said Beach had been suggesting how “a US company with a foreign parent company could potentially engage in legal political activity.” We’ve reached out to Backer and the Super PAC for comment on the latest complaint, and will update this article if we get a response.

David Backer, the attorney for the Great America PAC issued this statement to LawNewz.com:

We’re honored to join the dozens of other organizations that have been harassed for the benefit of the Campaign Legal Centers fundraising and PR scams at the behest of the Clinton Campaign and other liberal campaign finance scolds.  The complaint itself is merit-less and entirely based on snippets of video in an intentionally distorted hit piece from (ironically) a foreign source determined to interfere in our elections and which refused to release the full transcripts or unedited video – rightly drawing the ire of actual, credible journalists.  More importantly, even the wildly edited, self-serving clips and accompanying one-sided narrative, which could have easily been refuted had this rag made a single phone call, clearly shows that the PAC and its actual personnel never solicited, accepted, or even contemplated taking foreign directed or sourced funds.  As was made clear to the Daily Telegraph prior to their publication, Jesse Benton resigned his role as a volunteer advisor in May, has had no role with the PAC since, and was at no time acting at our request or on our behalf.