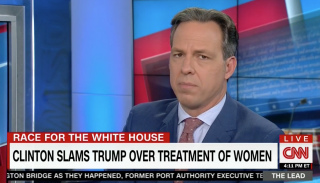 During Monday night’s debate, Donald Trump had a little outburst when Hillary Clinton accused him of not paying federal income taxes. Trump interjected, “That makes me smart.”  Trump clarified his statement a bit, but what he pays, if anything, is not clear.  As we reported earlier, even with hundreds of millions in revenue from Trump’s real estate empire, it is entirely possible and also would be perfectly legal for him to pay zero federal income taxes.  However, there are understandably still a few questions on this topic.

CNN’s Jake Tapper was discussing the subject with Trump surrogate Kayleigh McEnany this afternoon, but seemed to have a lot of trouble with some of Trump’s statements. Tapper said, “I’m not saying that he has ever violated the law.. I’m saying maybe he hasn’t paid his taxes completely in accordance with the law.” Tapper is not a lawyer, but he sure sounds like one. Being not “completely in accordance” with the law is also known as breaking the law. The IRS probably wouldn’t let you get away with that.

Watch the entire exchange below via CNN.

Tapper emphasized the fact that Trump has not released his taxes, so we don’t know for sure what’s in there.  Commentator McEnany continued to insist that Trump does pay taxes, and claims that taking advantage of loopholes is, indeed, smart business.

Of course, if Trump would just release his taxes, we’d bypass this entire conversation.

This article has been corrected to better reflect Tapper’s comments.