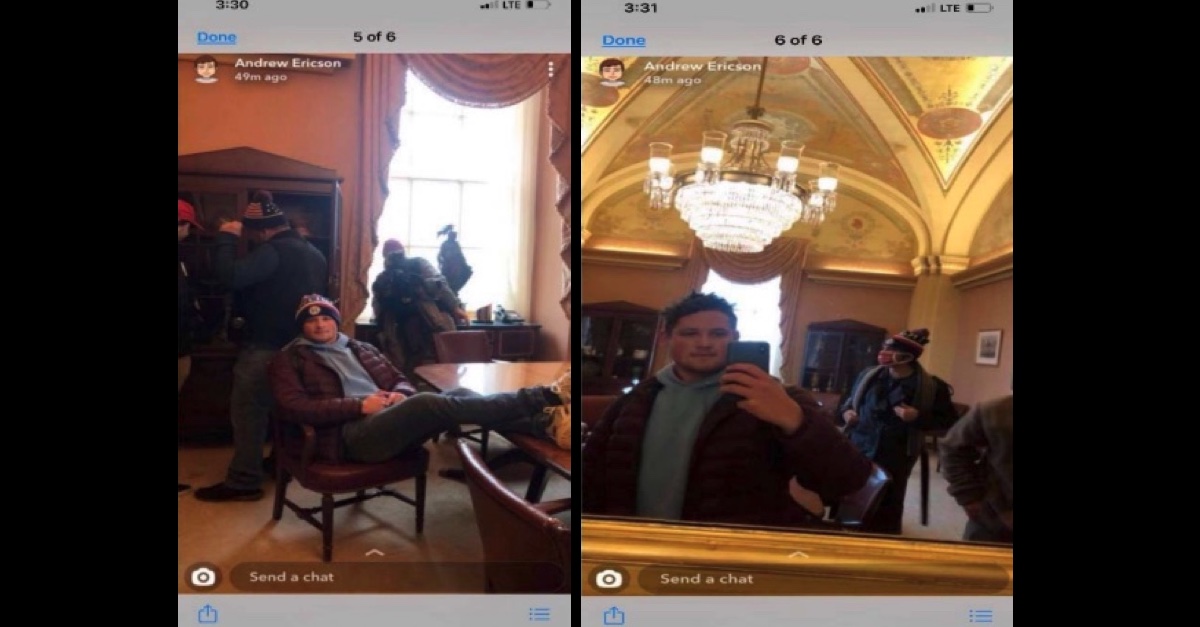 Image via the FBI

An Oklahoma man who swiped a beer from Nancy Pelosi’s office refrigerator while inside the U.S. Capitol building on Jan. 6 has been sentenced to intermittent incarceration and two years of probation.

Andrew Ericson, 24, posted two pictures of himself inside the Capitol to Snapchat, according to prosecutors, including a picture of him seated in a chair with his feet on a conference table. He also shared video showing himself taking a beer — specifically, a Corona Light — out of a refrigerator in House Speaker Pelosi’s office, according to prosecutors.

Ericson pleaded guilty in September to one count of parading, demonstrating, or picketing in a Capitol building. Federal prosecutors had requested a sentence of 60 days in prison, while Ericson requested credit for time served and community service.

At the sentencing hearing, prosecutors said that there were “several aggravating factors” that warranted incarceration and compared Ericson to other notable Jan. 6 defendants who received prison sentences for entering sensitive spaces after pushing past police barricades and breaching the Capitol. Prosecutors specifically named Jacob Chansley and Paul Hodgkins as examples.

“These acts show Mr. Ericson either failed to grasp the severity of what happened on Jan. 6, or he did understand and chose to make a mockery,” Assistant U.S. Attorney Christine Macey said at Friday’s hearing. “He was not ashamed at the time.”

McFadden said that although Ericson was not seen participating in any violence or destruction at the Capitol, his actions did warrant at least some incarceration.

“I’m faced with someone who is not living up to our society’s expectations,” McFadden said. “You pled to a misdemeanor, but the conduct was quite serious for a misdemeanor. Some incarceration is necessary to provide some punishment [and deterrence].”

However, McFadden said the fact that Ericson had two jobs weighed in his favor.

“I want to avoid leaving you unemployed,” said McFadden, a Donald Trump appointee. “I don’t think that will do anyone good.”

McFadden noted that Ericson didn’t appear to be particularly regretful of his actions.

“I appreciate your [presentencing] letter and I appreciate your comments now, but what I’ve heard from you and your behavior while on pretrial release did not suggest to me someone who recognizes the seriousness of the situation,” McFadden said, noting that Ericson had failed to call in “multiple times” during his pretrial supervision.

Indeed, compared to other Jan. 6 defendants who have made emotional and at times tearful pleas and apologies for their actions at the Capitol, Ericson’s remarks were exceedingly brief.

“I would just like to say on the record that I’m sorry to you, judge; to my fellow American citizens; to my family for enabling all this to happen,” Ericson said after McFadden invited him to speak. “That’s basically it, Your Honor.”

McFadden said that Ericson’s mere presence in Pelosi’s office contributed to the terror felt by Capitol workers who feared for their safety as the mob of Trump supporters swarmed the Capitol. That put him in a “different category” than other Jan. 6 defendants who pleaded guilty to misdemeanors.

“I do know that there were staffers throughout the Capitol building who were just terrified, huddling, sheltering in place, barricading themselves in the officers, terrified that somebody would enter,” McFadden said. “They’d been there for hours before they were rescued.”

McFadden also said that Ericson showed “wanton disrespect” to the Capitol and that while “there’s nothing wrong with protesting,” Ericson’s actions on Jan. 6 “clearly go beyond the pale.”

Ericson’s lawyer, Kira West, said that her client didn’t participate in any of the destruction that took place inside the Capitol. She said her client only realized how serious the violence was days later. McFadden didn’t seem to entirely buy West’s position.

“One of the videos the government provided showed your client videoing what looked like [someone] being taken out on a stretcher,” McFadden said.

McFadden ordered Ericson to serve his intermittent incarceration on consecutive weekends during his first year of probation.