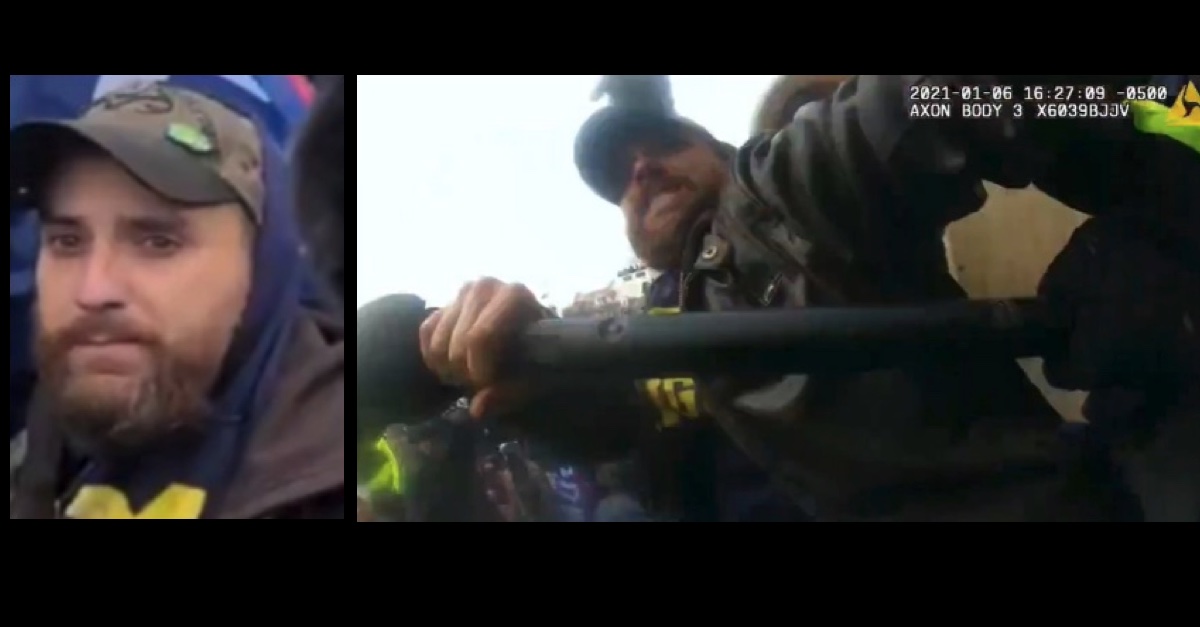 Image via the FBI/federal court records.

A Michigan man accused of leading assaults on multiple officers at the U.S. Capitol Complex on Jan. 6 allegedly kept helmets and a police badge as “trophies” of his illegal exploits, according to federal prosecutors.

Justin Jersey, 31, was part of what prosecutors described as a “multi-assailant sustained assault” on multiple Metropolitan Police Department (MPD) officers who were trying to protect the Capitol from hordes of Donald Trump supporters who were in turn focused on disrupting the Electoral College certification of Joe Biden‘s win in the 2020 presidential election.

Jersey appeared before U.S. Magistrate Judge Zia M. Faruqui on Wednesday for a hearing to determine whether he should be detained or released from custody.

Prosecutors allege that Jersey led an attack on three MPD officers identified in court filings only by the initials A.W., B.M., and C.M. The attack took place at an archway that afforded access to the interior of the capitol building, according to prosecutors.

According to the memo, this left A.W. vulnerable to further attack.

“[W]hile A.W. was on the ground, his helmet was knocked off, he was kicked by codefendant Whitton, and he was dragged — by codefendants McAbee and Mullins — into the mob of rioters gathered on the Lower West Terrace,” the memo notes. “A.W. sustained significant injuries, including a laceration to his head that required staples to close.”

Jersey then grabbed another baton and used it to “strike at other police officers in the Archway,” the memo says.

The document further describes in detail what happened next to the MPD officers:

The Department of Justice also announced another arrest in the assaults Wednesday: Mason Joel Courson, 26, of Florida.

During the detention hearing, Assistant U.S. Attorney Benet Kearney argued that part of the reason why Jersey should be detained is that he appears to be pleased with his actions and is not at all remorseful.

“It seems clear that the defendant is proud of what he did,” Kearney said. “This is something he chose to memorialize at his home. The helmet found at his home was hanging over the bar like a trophy or a prize. This is not a defendant who felt much remorse or consternation.”

Kearney said that even though Jersey wasn’t armed or wearing protective gear, as other Jan. 6 defendants were, he did go to Washington ready for a fight.

“It’s clear from [his messages] in the days leading up to Jan. 6 that violence is something he contemplated occurring,” Kearney said.

Indeed, as the detention memorandum says, Jersey texted someone on the night of Jan. 5: “If anything were to happen tell my daughter I love her.”

When someone else urged him to “stay safe and take a small concealed club,” Jersey texted in response that he would “have something with me.”

Jersey even apparently kept “trophies” from Jan. 6 which authorities discovered while executing a search warrant at his residence on Dec. 2.

“Among the items recovered were trophies that the defendant had taken from the U.S. Capitol—an MPD officer’s badge and an MPD helmet—and a jacket that is consistent with the one the defendant wore on January 6, 2021,” the government’s detention memorandum says. “The helmet, which was not Officer A.W.’s, was displayed on the wall near the bar in the defendant’s home. Later in the day on December 2, 2021, FBI agents recovered Officer A.W.’s helmet from an associate of the defendant, who informed agents that she had received it from the defendant.”

Attorney Alfred Guillaume, a private attorney appointed to defend Jersey in this case, pushed back on the government’s narrative.

Regarding the allegation that Jersey appears to have removed his backpack for greater mobility before springing back into the crowd and attacking the officers, Guillaume said that it’s possible his client was actually trying to help two people nearby that the government’s memo described as being in “medical distress.”

“The government indicated he removed his backpack to increase mobility,” Guillaume said. “[But] it could be because he had something in his backpack to offer for help to someone having medical episode.”

Judge Faruqui did not make a final determination Wednesday as to whether Jersey should remain in pretrial detention.

He asked Kearney, the prosecutor, to provide additional facts to support the argument for why Jersey should be detained while some of his co-defendants have been released. He told Guillaume that he needs more information on who would serve as potential custodians for Jersey if he were released and wanted more context on some of what he called the more “concerning” parts of the allegations against the defendant.

“He came here having made statements essentially that he would be armed, in the thick of things,” Faruqui said. “[He] told someone to tell his daughter basically what someone does if they’re going to war. Any sort of mitigation you can provide to that would be helpful.”

Faruqui also sought an explanation for the items found at Jersey’s home.

Jersey’s next detention hearing is set for Monday at 11:30 am.

Read the government’s memorandum in support of detaining Jersey below.