Inside the Statutory Rape Conviction and Domestic Violence History of the Accused U.S. Capitol Rioter Who Taunted Cops as ‘Protecting Pedophiles’ 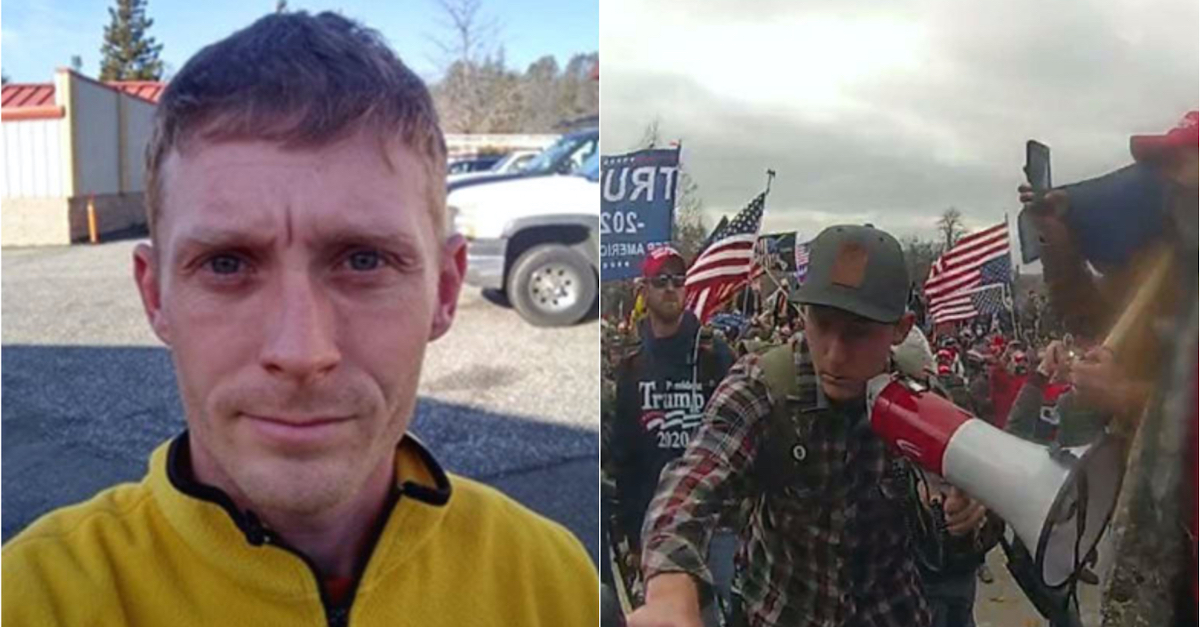 As described in an FBI affidavit, the photograph on the left is the one Sean McHugh sent to a probation officer for an offense unrelated to the U.S. Capitol siege. The image on the right is from a police body camera on Jan. 6th.

Capturing an irony of an accused U.S. Capitol rioter who allegedly shouted through a bullhorn that police were “protecting pedophiles,” CNN dug up the suspect’s lengthy rap sheet and reported that he was convicted a little more than a decade ago for the statutory rape of a 14-year-old girl.

Suggesting Sean McHugh’s apparent beliefs in the QAnon conspiracy theory may have carried an air of psychological projection, the report also undermined the depiction of the pro-Donald Trump mob by the former president and his supporters as a band of indignant patriots who love law enforcement and their country. McHugh, like some 130 accused rioters charged with him, has been accused of assaulting or resisting police on Jan. 6th.

Law&Crime followed up on CNN’s report with a dive through McHugh’s court records and an interview with the man who prosecuted him for that offense.

“You’ve Got to Convince 12 People”

According to Todd Kuhnen—the same former prosecutor quoted in CNN’s report—McHugh was slapped with two counts under California’s Penal Code Section 261, one subsection penalizing rape by way of force, duress and menace and another by way of intoxication.

“So, we had those two competing theories, essentially,” Kuhnen told Law&Crime. “It was either one or it was the other. He wouldn’t ever been convicted of both of them.”

As initially reported by CNN, McHugh pleaded down to a lesser charge of unlawful sex with a minor in 2010, and he received a 240-day sentence—ultimately serving less time—plus four years of probation. Though the case was more than a decade old, Kuhnen recalled taking notes about it because a local report suggested the then-23-year-old McHugh received a sweetheart deal.

“So I remember downloading that story and making notes of things that she had said, just in case anybody ever asked me about it,” Kuhnen recalled. “I didn’t realize it’d be 11 years later.”

Kuhnen defended his work on the old case, pointing out that the math simply did not add up to a more serious charge under California Penal Code Section 288—lewd acts upon a child under the age of 14. The victim was too old (she was already 14) and the perpetrator was not old enough (he wasn’t “at least 10 years older” at the time for a charge under a different section of the same statute). The ex-prosecutor, now a criminal defense attorney in Sacramento, recalls believing he had a strong enough case to draw McHugh to the negotiating table—but perhaps not so strong to convict on the more serious offenses.

“You think back on the Stanford swimmer case, they got that one because two other people came upon him when he was engaged in the act,” Kuhnen said in the phone interview, referring to student athlete Brock Turner’s conviction for sexually assaulting an unconscious woman roughly half a decade ago. “So [there] we have a third party. But in this one, it’s just the two of them. And you can believe her all you want, and I did believe her. But you’ve got to convince 12 people, and if you can’t, that’s tough.”

CNN quoted Kuhnen as saying that McHugh’s DNA was found, but the former prosecutor was more equivocal on that point with Law&Crime. He said he believed that must have happened for the case to have resolved as it did.

Law&Crime requested court records in the case from California clerks to clarify the matter, but they were not available by press time.

“Too Many Times to Describe”

Broad outlines of McHugh’s prolific criminal record, however, were available in local and federal records. The FBI noted that McHugh’s alleged assault of police officers at the U.S. Capitol was hardly his first brush with the law. Agents interviewed local authorities from McHugh’s 13,330-population city of Auburn, California, and though the officers could not recall everyone they interacted with, McHugh stood out for some of them.

“Some of these officers had never interacted with McHugh, while others had multiple contacts with McHugh—as many as 20 interactions, the most recent recorded interaction being from a 2017 DUI arrest,” the FBI’s affidavit states.

McHugh’s name matches a little more than a dozen records from the Placer County Superior Court online database, which is not a comprehensive catalogue of the defendant’s confirmed or alleged misconduct. The statutory rape conviction is not listed on that database, as a clerk said that docket has been transferred.

The same year as that 2010 prosecution, however, McHugh was slapped with a restraining order in a family code case for domestic abuse of a woman—roughly his age—whom he allegedly left with two black eyes, a large welt on her forehead, and bruises on her body. The address listed for McHugh in that docket matches the one identified by the FBI.

“I was trying to leave him and obtain employment,” the woman wrote, describing an alleged incident from November 2009.

The same woman who attained that protective order described other alarming allegations from October 2009, in which she recalled being in a car with McHugh along California’s Highway 49. 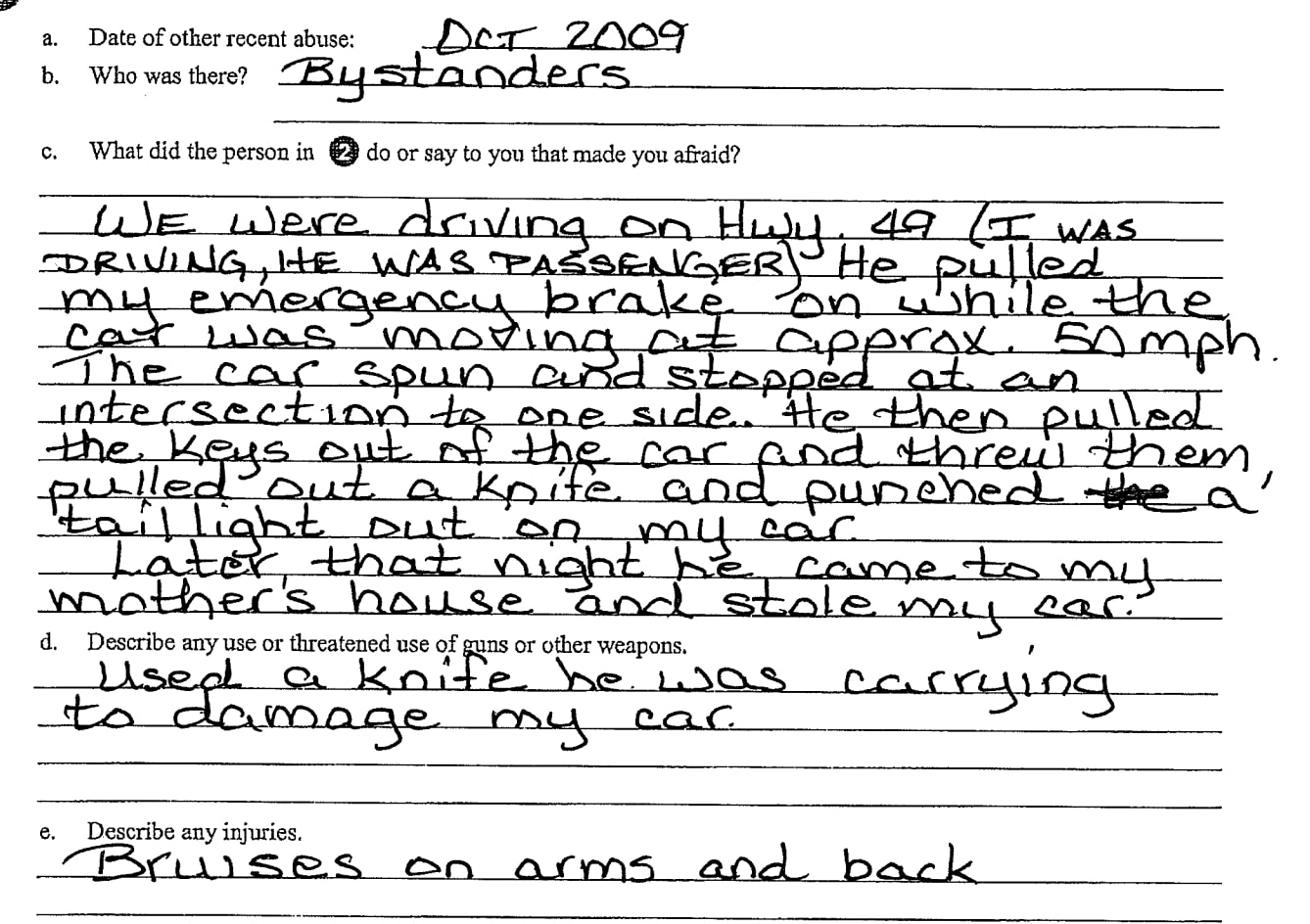 “He pulled my emergency brake on while the car was moving at approx. 50 mph,” she wrote in a handwritten complaint. “The car spun and stopped at an intersection on one side.”

She claimed that he also knifed her car, punched out a taillight, and stole her car from her mother’s house.

That December, McHugh damaged her car again, hit her several times, broke her bottom front tooth, and left several bruises over her body, the woman claimed.

According to the document, the woman’s list was not exhaustive, and she wrote in the final entry for “other abuse,” simply: “Too many times to describe.”

“Starts shoving and hitting without much provocation,” she added.

“There is a Second Amendment Behind Us”

Federal prosecutors allege that McHugh assaulted police without much provocation, either, and images embedded in his criminal complaint appear to show body camera stills of him deploying a yellow chemical spray at police. 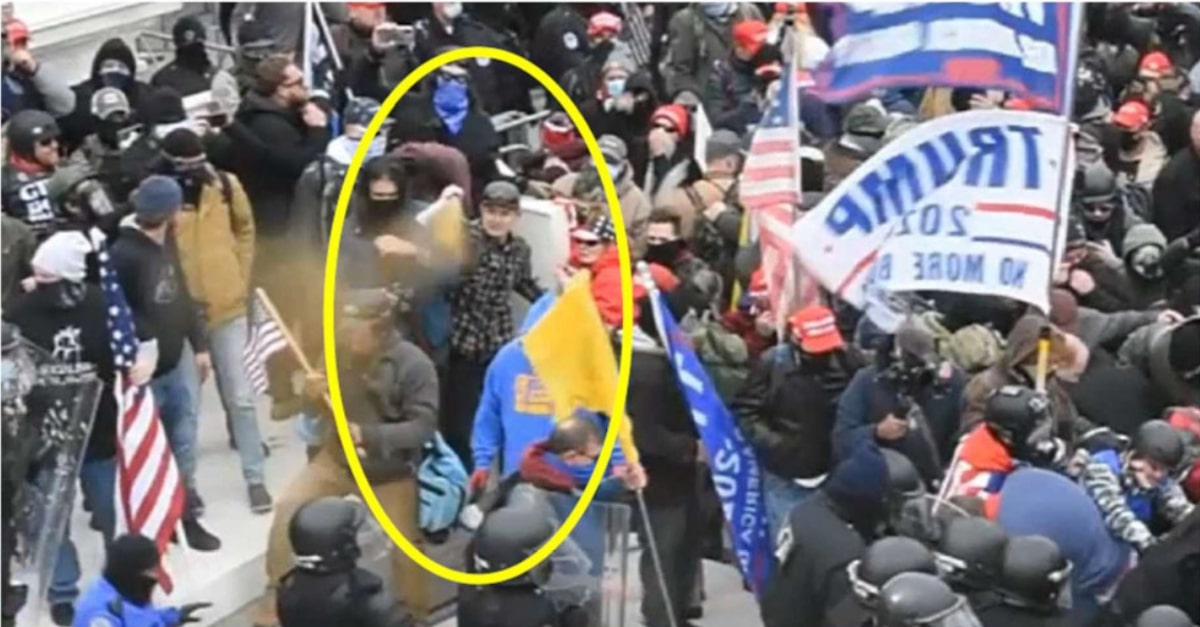 “There is a second amendment behind us,” 34-year-old Sean Michael McHugh allegedly taunted officers, according to his criminal complaint. “What are you going to do then?”

Arrested last week, McHugh faces eight charges, including assaulting law enforcement with a deadly or dangerous weapon. The latter count appears to refer to the spray and his allegedly pushing a metal sign at the officers and shouting: “Put it up there! Put it up there!”

Along with the “pedophiles” jibe, McHugh also allegedly accused police officers guarding the capitol of “protecting communists.” Both statements are possible signs of adherence to the QAnon conspiracy theory that a powerful elite clique of Democrats sexually abuse and eat children. Several other charged rioters expressed belief in the same conspiracy theory.

The federal charges appear to put McHugh in more serious criminal jeopardy than he ever faced, in contrast to the visible entries on California’s online database, where charged offenses have ranged from misdemeanors and felonies and included property offenses, DUIs, and violations of parole.

His last Placer County Probation officer, whose name is listed in his federal case’s docket, no longer works for the department, and her supervisor did not immediately respond to a request for comment.

CBS reported that at least 17 police officers remain out of work due to injuries from the Capitol riot, including 10 Capitol police and seven Metropolitan Police Department officers. More than 150 officers were injured in total on Jan. 6.

[imags via screenshots from the FBI affidavit]