Pennsylvania Man Who Was 19 When He Stormed the Capitol on Jan. 6 Gets 14 Days Behind Bars 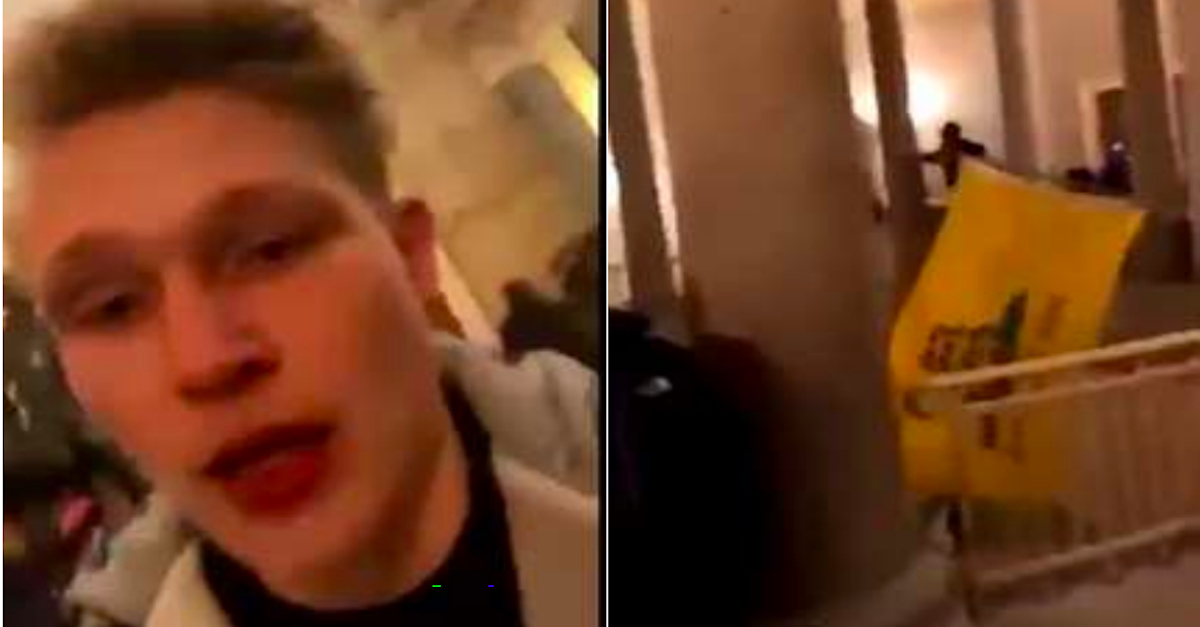 The youngest person so far to plead guilty to charges related to the Jan. 6 attack on the U.S. Capitol has been sentenced to two weeks in federal prison.

Leonard Pearso “Pearce” Ridge IV, of Feasterville, Pennsylvania, was 19 years old when he joined the mob of Donald Trump supporters who overran police and breached the Capitol in an attempt to stop the congressional count of Electoral College votes and to block certification of Joe Biden’s win in the 2020 presidential election.

On Jan. 6, Ridge posted at least five videos from the siege.

“Let’s go, let’s go. Get in this b***h,” Ridge allegedly yelled in one of the first Jan. 6 videos he uploaded to Snapchat, according to prosecutors.

Text messages also show Ridge telling someone “I just made history” the evening of Jan. 6.

On Jan. 7, Ridge texted the same person: “Yeah just stormed the US capital [sic] for the first time in US history and I was a part of it.”

Ridge is now 20 years old and, according to his attorney and court documents, works for his family business, the Top of the Ridge Mobile Home Park in Bensalem.

He pleaded guilty in October to entering and remaining in a restricted building or grounds. He had also been charged with obstruction of an official proceeding and disorderly conduct on Capitol grounds.

In sentencing Ridge to 14 days in prison Tuesday, U.S. District Judge James Boasberg said that although Ridge did not commit violent acts while entering or inside the Capitol, his actions that day—and in the days before and after—did warrant some time behind bars.

“What is exceedingly concerning to me is your statement before January 6,” Boasberg said, referring to Ridge’s text that the certification needed to be stopped. Boasberg said that it is “conceivably” possible that some of those who breached the Capitol on Jan. 6 were “swept up by the crowd or by the moment,” or were “curious” and wanted to see what was going on.

“I doubt there were many of those people, but that’s conceivably true for some,” Boasberg said. “But it’s not true for you, given your previous statements, so you can imagine why that’s particularly concerning to me.”

Boasberg said that Ridge’s stated intentions to disrupt the certification of the election “strikes at the bedrock of our democracy: the peaceful transition of power.”

“You intended to disrupt the peaceful transfer of power, and that alone is a serious criminal act,” Boasberg said.

Boasberg also said that Ridge’s statements right after the event, that he “stormed the Capitol” and broke down doors to lawmakers’ offices, may have been “teenage bravado,” since there was no evidence that he did those things.

“But what you weren’t saying afterwards was ‘This really got out of hand, I have no idea why I went in there, this was a terrible thing,'” Boasberg said. “You were saying the opposite. So given your intent and your actions in the Capitol, I believe that some jail time is appropriate here.”

Boasberg, a Barack Obama appointee, said that Ridge’s age actually worked in his favor in the sentencing decision.

“There are plenty of teenagers doing stupid poorly thought-out, unwise things every day and you were one of them,” Boasberg said. “If you were a few years older, I would be giving you every day that the government asked for,” Boasberg said.

Ridge spoke briefly on his own behalf before receiving his sentence.

“I would like to say I’m sorry for my actions and my conduct on that day,” Ridge said. “I didn’t realize the impact I could have on our country and how it would view me as a person, how it would view our country to the rest of the world. If I could do it over again I never would have gone into that building or do the other things I did that day.”

Ridge’s attorney Carina Laguzzi asked that Ridge be allowed to serve his sentence on the weekend, so that he could continue to work. Boasberg said he had considered that, but given that Ridge works with his family, Boasberg didn’t think Ridge’s job would be in jeopardy.

“I know you’re not a wealthy person, and a fine like that will sting,” Boasberg said. “That’s the intent of such a fine.”

Ridge is not the youngest person charged in connection with the Jan. 6 riot at the Capitol; that distinction goes to Bruno Joseph Cua, who was 18 years old at the time. Cua, who so far has not made a plea deal, is charged with much more serious crimes than Ridge, including assaulting an officer, obstruction of an official proceeding, and carrying a deadly or dangerous weapon on Capitol grounds.

Ridge, however, does appear to be the youngest defendant so far to plead guilty. That also makes him the youngest to receive a prison sentence for being part of the mob at the Capitol that day. The oldest known Capitol siege defendant, 81-year-old Gary Wickersham, recently pleaded guilty.

Boasberg ordered Ridge to self-surrender to federal prison no sooner than March 4, saying that, by then, the current coronavirus surge will likely have abated.

“I expect this will be a very serious experience,” Boasberg told Ridge after issuing his sentence. “I believe, based on the letters I’ve read and what you’ve said, you are someone who will be leading a life that contributes to your community and your society. I trust you will do that beginning now and when you emerge from this sentence. Good luck to you on that.”