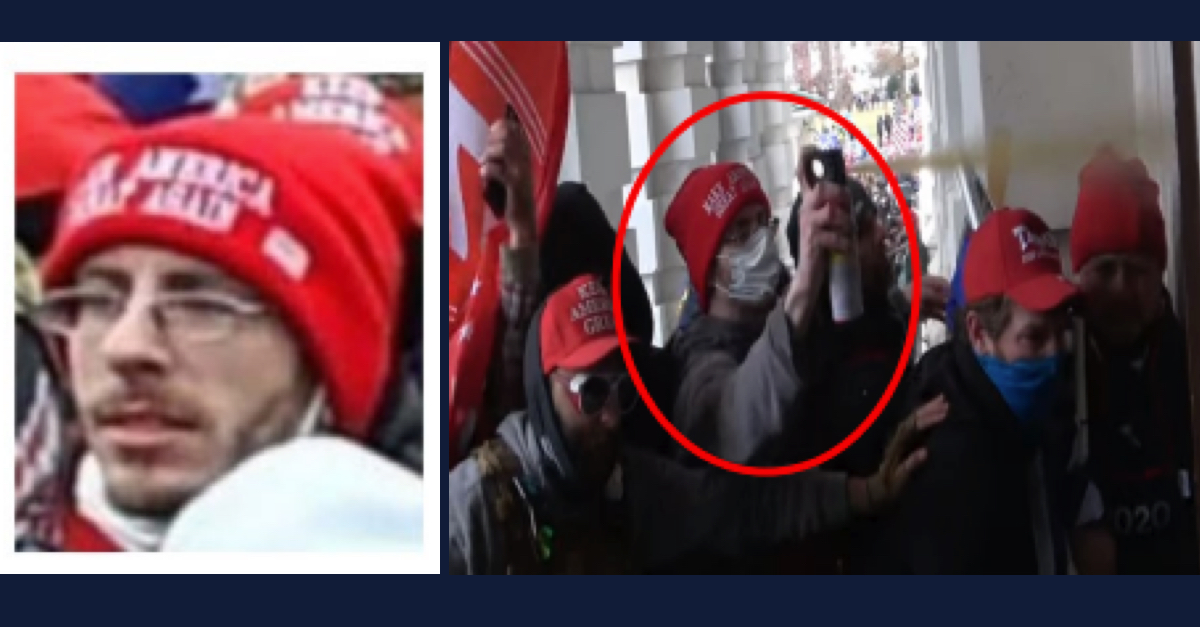 An Ohio man is facing felony charges for allegedly spraying police with a chemical irritant during a violent clash outside the doors of the U.S. Capitol on Jan. 6.

Ryan Swoope, 28, of Perry, Ohio, is accused of joining the mob at the Capitol building on the day Congress was meant to certify Joe Biden’s victory over Donald Trump in the 2020 presidential election. According to federal investigators, he and two companions, Saul Llamas, 29, and Jordan Siemers, 25, also from Perry, entered the Capitol at approximately 3:08 p.m., almost an hour after the initial breach, through the Senate Wing Door.

Swoope was allegedly seen inside the Senate Spouses’ Lounge where he joined other rioters chanting “Who’s House? Our House!” He exited the building through the Senate Wing Doors at around 3:17 p.m. after spending around nine minutes inside.

He did not, however, leave the Capitol at that time, and his subsequent actions likely elevated his alleged crimes from misdemeanors to two serious felonies.

A picture taken outside the Capitol at around 3:45 p.m. appears to show Swoope “smoking a cigarette and speaking on his cellphone as a member of law enforcement yells into a bullhorn and encourages the crowd to leave,” the probable cause affidavit says. 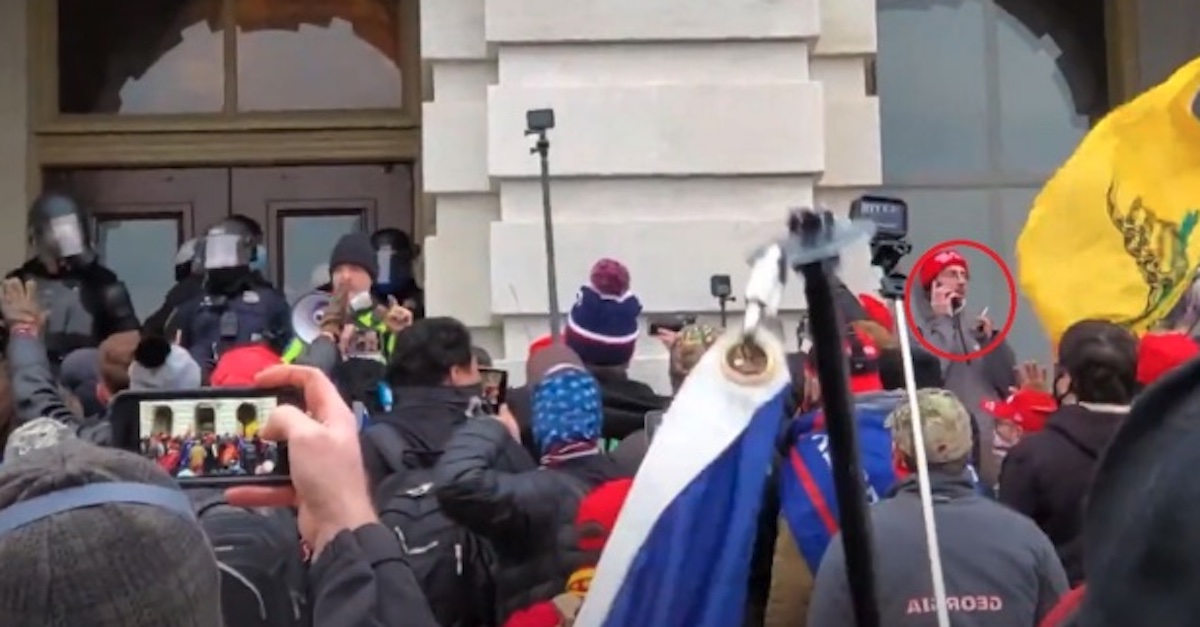 After what was apparently an invigorating cigarette break, Swoope re-entered the fray. According to investigators, just moments later — at around 3:52 p.m. — Swoope was facing off against officers from the Metropolitan Police Department outside the North Door to the Capitol building.

“As the crowd overcame the police line, law enforcement was forced to fall back into the Capitol Building,” the affidavit says, noting that an MPD officer identified only as Office D.E. passed through the North Door to the building at this time.

“Ten seconds after Officer D.E. passes through the North Door, SWOOPE can be seen in the News2Share video holding up a silver cannister [sic] with a black top and spraying an orange substance — consistent with a chemical irritant — into the open door and in the direction of law enforcement,” the affidavit says.

As this happened, according to the affidavit, Officer D.E.’s body-worn camera “captured the sound of an aerosol spray can followed by a visible could that moved in the direction os Sergeant A.B. of the United States Capitol Police (‘USCP’) who was guarding the doorway.”

Swoope is seen on surveillance footage a minute later leaving the area and carrying a silver canister in his right hand.

The FBI’s subsequent “BOLO” — short for “Be On The Lookout” — for Swoope apparently yielded results.

“On November 15, 2021, a relative of SWOOPE called in to the FBI to report that the person pictured in BOLO AFO #486 appeared to be SWOOPE,” the affidavit said. “The relative stated they were aware that SWOOPE went to Washington, D.C. on or about January 6, 2021.”

Swoope is charged with assaulting, resisting, or impeding officers with a dangerous weapon and interfering with law enforcement officers during a civil disorder, both felonies. The assault charge, which is enhanced due to his alleged use of the chemical spray, carries a potential 20-year prison sentence, while the civil disorder charge carries up to eight years behind bars.

Swoope is also charged with four trespassing and disorderly conduct misdemeanors that carry a combined three years behind bars.

Llamas and Siemers were also arrested Thursday. They are charged with with the four trespassing and disorderly conduct misdemeanors that Swoope also faces, but they are not accused of any felonies.

Read the statement of facts here.