‘Guess What? You’re an A**hole’: Unidentified Voice Disrupts Listeners During Detention Hearing for Pa. Man Accused of Assaulting a Cop on Jan. 6 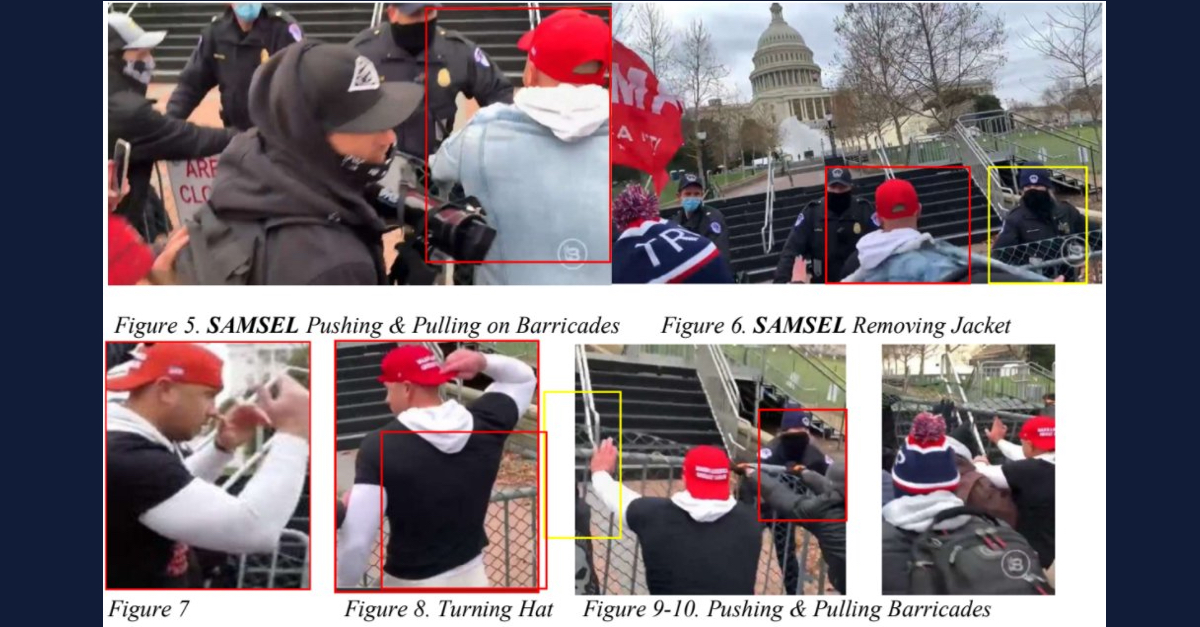 Ryan Samsel at the Peace Circle area of the Capitol grounds on Jan. 6 (images via FBI court filings).

A detention hearing for a Pennsylvania man accused of causing a concussion in a police officer during a scuffle on U.S. Capitol grounds on Jan. 6 was peppered with angry-sounding outbursts from an apparent supporter of the defendant.

Ryan Samsel, of Pennsylvania, was before U.S. District Judge Jia Cobb on Tuesday as his lawyers, Stanley Woodward and Juli Haller, argued for his release. Samsel has been in detention since his arrest in January of 2021. He’s accused of being part of a group of rioters that worked together to overturn a police barricade by pulling and pushing it back and forth, eventually knocking an officer to the ground and causing her to hit her head. Prosecutors say that officer needed to be taken to the emergency room, where she was diagnosed with having suffered a concussion.

The first indication during Tuesday’s hearing that things were not business as usual, at least technologically speaking, came early on, when Cobb was reviewing documents from a doctor who had examined Samsel. That doctor, Andrew Edinger, had signed an affidavit on April 21 concluding that Samsel had significant medical issues that could not be treated at USP Lewisburg where he is currently housed.

“I am very concerned that his medical condition requires treatment which cannot be provided here,” Edinger said, basing his conclusion on a combination of an examination of Samsel and information Samsel provided. He acknowledged that he didn’t have Samsel’s medical records, but “his clinical exam validates virtually everything that he has told me.”

“Mr. Samsel’s verbal statements to me regarding his health status were misleading in some areas and outright falsehood in other areas,” Edinger’s April 29 letter said.

Specifically, Edinger indicated that Samsel had lied to him about having been diagnosed with Hodgkin’s Lymphoma diagnosed on a lymph node biopsy.

“This condition would warrant extensive treatment and consideration when dealing with this vascular compromise,” Edinger’s second affidavit said. “There are no comments to this in the records provided. Instead, there is reference to a resolve problem of lymphadenopathy, which occurred in 2015.”

Samsel’s lawyers argued that their client needs to be released in order receive necessary medical treatment. They also argued that he is not a danger to the community, an assertion the government has rebutted by emphasizing Samsel’s extensive criminal history and the dual facts that he was on parole and there was an open warrant for his arrest when he allegedly assaulted police during the Jan. 6 siege.

Shortly after the hearing started, Cobb, a Joe Biden appointee, had just finished saying that the doctor’s second affidavit “seems to be an about face” when another voice could be heard.

“About face?” the unidentified voice said, drowning out the judge. “Don’t be an asshole. Just let him out. You’re never transparent, you never were.”

Cobb apparently did not hear the voice and continued speaking.

The nasally-sounding voice was heard by those who dialed in to the court’s public line, an option that has been made available in response to the coronavirus pandemic. Anyone is allowed to call the line, but journalists in particular have relied on the added accessibility in lieu of in-person courtroom coverage.

“He was abused by your prison,” the voice said moments later as Cobb continued to speak. “Release him.”

Soon after that, the same voice was heard saying: “They’re trying to kill us. Release him. I’m sick of this.”

Seconds later, he added again as Cobb was speaking: “Guess what, you’re an asshole. Whoever keeps him in there, let him out.”

At that point, another voice chimed in, saying what those listening already knew: someone on the public line was insulting the judge, and it appeared that Cobb couldn’t hear it.

As this latest person noted, journalists on Twitter were taking notice.

The teleconference for the detention hearing for Jan. 6 defendant Ryan Samsel has turned out to be a mess on the phone.

The teleconference for the detention hearing for Jan. 6 defendant Ryan Samsel has turned out to be a mess on the phone.

At some point, perhaps ironically, two voices were later heard talking about the fact that people had apparently been unaware that they could be heard on the public line. It appears that those two people were similarly unaware that those dialed in to the line could hear them as well.

Not all voices heard on the line were talking about Samsel’s case. At some point, two voices were heard in a conversation about their home’s property value. Someone else mentioned something about an egg sandwich.

About an hour into the hearing, yet another voice commented on efforts to disqualify Rep. Madison Cawthorn from running for office because of his alleged role in the siege at the Capitol, comparing the North Carolina Republican to Rep. Marjorie Taylor Greene (R-Ga.), who is currently facing a similar challenge.

It’s unclear what caused the mishap. A person who answered the phone at the District Court said that they were unable to comment.

Cobb ultimately did not rule on Samsel’s request to be released from detention. She will resume the matter on Thursday, when she expects to hear from Edinger himself.