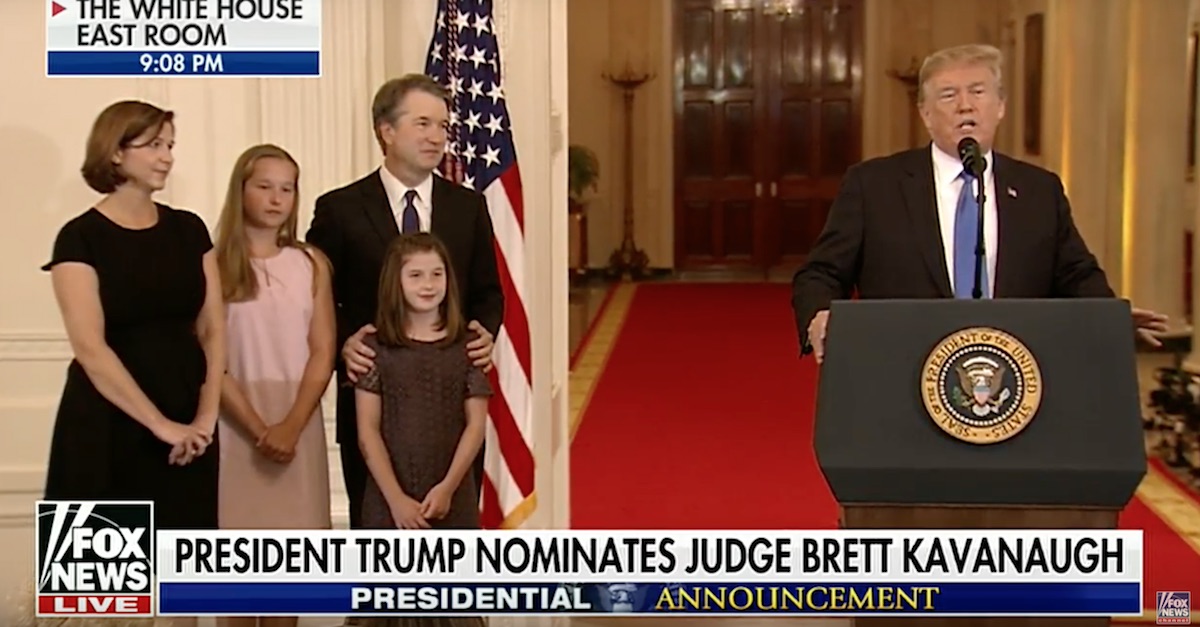 President Donald Trump has announced that federal appellate judge Brett Kavanaugh is his nominee to replace Anthony Kennedy on the Supreme Court of the United States.

In a twist of fate, Kavanaugh is replacing a man he clerked for earlier in his career. Here are five things to know about Kavanaugh, some of which you can expect to come up at congressional hearings.

1. Kavanaugh investigated the death of Vince Foster and the Monica Lewinsky scandal as part of special prosecutor Ken Starr’s staff.

In the 90s, two-time Yale grad (undergrad and law school) Kavanaugh found himself on the staff of Ken Starr, investigating claims surrounding Foster’s death and the conduct of then-President Bill Clinton.

Starr explained that Kavanaugh was chosen to draft some of the most sensitive questions Clinton would be asked about Monica Lewinsky because of Kavanaugh’s “superb and balanced judgement.”

“This was not a man on a mission. This was a legal document of great potential moment that needed to be very carefully crafted, so I was looking to one of the office’s most talented lawyers — of superb and balanced judgment — to take the lead in drafting,” he said. “But of course it became a product of the office, including yours truly.”

2. Kavanaugh became a George W. Bush staffer and was rewarded with a U.S. appellate judge nomination, but there was a problem.

Charges of partisanship would follow Kavanaugh not just because of the Starr days, but because of his history working for George W. Bush. Kavanaugh was involved in the Great Florida Recount of 2000 (the Bush vs. Al Gore election) and was instrumental in Bush getting re-elected in 2004.

As you can see in a photo from ’04, Kavanaugh and Bush political advisor Karl Rove were buddy-buddy. 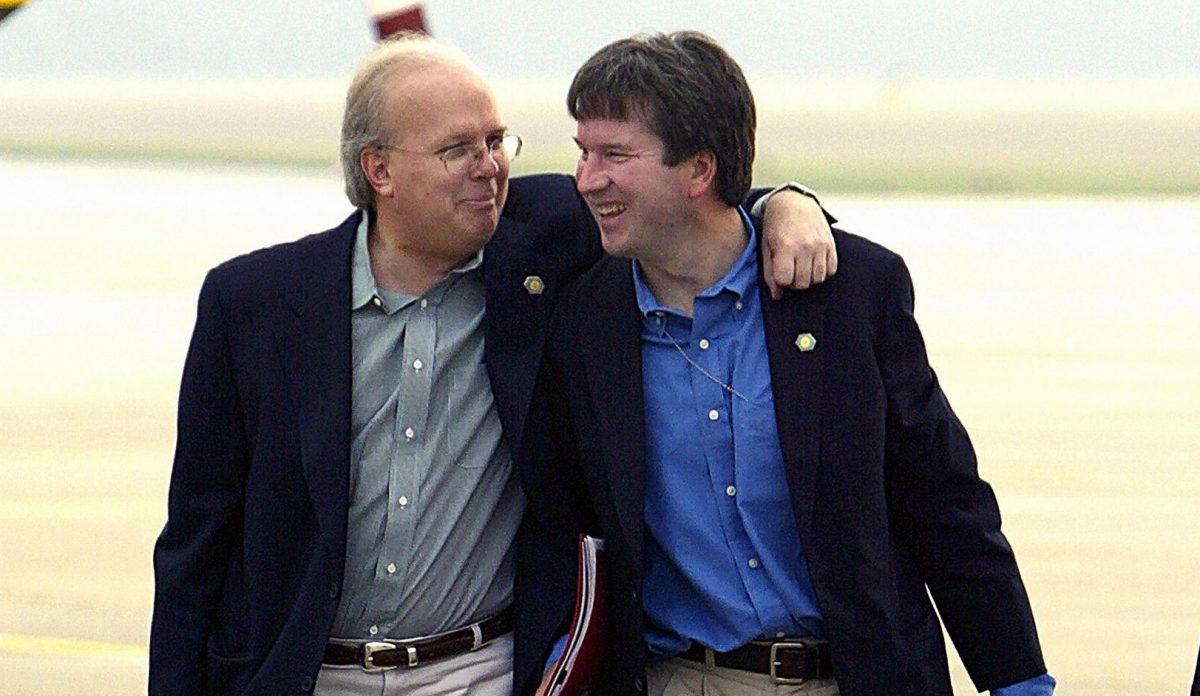 Kavanaugh was rewarded by Bush for his work with a nomination to the U.S. Court of Appeals for the District of Columbia Circuit in 2003. It’s the position Kavanaugh holds to this day, but it took him years to get confirmed.

A glance at some news clippings from 2006 refers to the ongoing tussle in Congress over Kavanaugh’s “inexperience” and “partisanship.” In opposing Kavanaugh, Sen. Chuck Schumer (D-N.Y.) expressed “deep concerns about this nominee,” saying, “If there was a political fight that needed a political foot soldier in the last decade, Brett Kavanaugh was probably there.”

Before Kavanaugh was confirmed in 2006, he said, “If confirmed, I will call them as a I see them. My record shows I was fair.”

As Kavanaugh was waiting for his U.S. appellate nomination to go through, he was asked by then-President Bush what kind of person he should nominate to the Supreme Court. Bush gave Kavanaugh some credit in his memoir “Decision Points” for the answer, the Washington Post noted.

“The tiebreaker question, [Kavanaugh] suggested, was which man would be the most effective leader on the Court–the most capable of convincing his colleagues through persuasion and strategic thinking,” the memoir reads.

4. Not all conservatives are pleased with Kavanaugh’s history.

As for Kavanaugh’s actual rulings, the discussion in conservative circles have been mixed. On the subject of Citizens United, for instance, Kavanaugh has been criticized for dissenting at the appellate level.

James Bopp Jr., a  lawyer who helped defend Citizens United in a lawsuit against the Federal Election Commission (FEC), which resulted in the court’s holding that political spending is speech protected by the First Amendment, reportedly asked President Trump in a letter not to pick Kavanaugh. Sources familiar with that letter said Bopp Jr. did it for two reasons: First, because he didn’t like how Kavanaugh ruled on campaign finances and, second, because liberals seem more concerned about Amy Coney Barrett.

“When government seeks to use its full power, including the criminal law, to command where a person may get his or her information or what distrusted source he or she may not hear, it uses censorship to control thought,” he wrote. “The First Amendment confirms the freedom to think for ourselves.”

Kavanaugh’s reasoning on a teenage immigrant abortion case and a John Roberts-esque Obamacare opinion from 2011 left some conservatives unsatisfied. Beyond this, his history on the matter of impeachment in the form of a broad definition of obstruction of justice may be seen as a threat to the current administration.

For as many nays as there have been, however, there have been yeas. Over at National Review, Kavanaugh’s constitutional conservative record was deemed “impeccable,” i.e. “without sin.” Fred Barnes at the Weekly Standard said complaints about Kavanaugh’s opinions are “few and picayunish.”

“I watched him digest thorny legal questions and respond with a calm compassion. Judge Kavanaugh was never rattled nor condescending. He was thoroughly decent and always respectful — well, maybe not always, as he has a wry sense of humor and loves to poke fun, even at himself, often followed by a choppy, contagious laugh,” he wrote in an op-ed. “Judge Kavanaugh’s collegiality made me like him, but it was his steadfast commitment to principle that earned my respect.”

Kavanaugh’s expressed views that a sitting president should not indicted have also garnered attention.

5. Book claim that Kavanaugh called Hillary Clinton the b-word is bound to be mentioned.

You just know that the following excerpt from the David Brock book “Blinded by the Right” is going to come up at hearings. Brock, who founded Media Matters, wrote in that book that Kavanaugh was spotted mouthing the word “bitch” when Hillary Clinton‘s face popped up on a television during Bill Clinton’s State of the Union Address in 1997.

Kavanaugh was identified as a deputy of Ken Starr’s.

Judge Brett Kavanaugh is at or near top of SCOTUS list, per several people close to President Trump. But oppo research for possible hearings already moving fast. Sources pt'ing to David Brock's book "Blinded by the Right." Kav alleged to have mouthed an expletive re HRC. Pg. 306. pic.twitter.com/k10MbCm4RR