Top Attorneys Weigh In on What Happened During Clinton FBI Interview 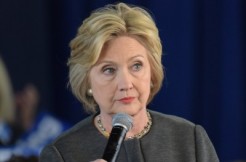 Hillary Clinton, presumptive Democratic presidential nominee, is being investigated by the FBI over her use of a private email server during her time as U.S. Secretary of State. With investigators finally interviewing her at the Bureau’s Washington D.C. headquarters on Saturday, we had to wonder: How would an attorney advise her in this situation?

So we asked a few top lawyers.

“Given all these circumstances, this is the only way to do it,” Elkan Abramowitz, a Washington D.C.-based attorney, told LawNewz.com on Saturday. He deals with high profile white collar cases frequently. Abramowitz said this is a unique investigation, so there’s nothing “normal” about what happened here. He mentioned the only way Clinton could get in trouble during the interview is if she lied. Abramowitz said that her attorneys likely and carefully reviewed the depositions of Clinton’s aides. Several of her aides, including Cheryl Mills and Huma Abedin, were deposed as part of Judicial Watch’s lawsuits against the State Department. He said Clinton’s lawyer, David Kendall, would likely know what other deposed aides said.

He doubted anything major would emerge from Saturday’s interview.

“There should be no surprises, but you never know,” he said.

That this interview happened on a Saturday is not unusual since the FBI is known to accommodate celebrities. Abramowitz added that FBI Director James Comey has a reputation for honesty.

“I’m surprised the investigation is taking as long as it has,” he said.

Another attorney told us that if he represented Clinton, he wouldn’t have agreed to the interview if he expected it to cause problems.

Bill Thomas, an Atlanta-based defense lawyer and former federal prosecutor, told us he’d have thoroughly reviewed all the available facts beforehand, and made sure his client wasn’t open to criminal liability. With that in mind, agreeing to the interview was in Clinton’s best interest.

“If you can assist them in ending the investigation sooner rather than later, that’s what you want to do,” he said.

Nonetheless, there are possible problems in a situation like this. He said Clinton’s lawyers “would not know everything the investigators know.” Hypothetically speaking, an FBI agent might open with “softball questions,” then present an allegation the defense wasn’t aware of. Thomas said that as a matter of standard practice, a defense lawyer must be prepared to shut down the interview if that happens.

Generally, he said, he tries to get immunity for clients who speak to investigators, but Clinton probably hasn’t asked for it yet because doing so would look really bad to the general public. “The question becomes, ‘Why would you need immunity if you did nothing wrong?'”

As for three-and-half-hour time span? He said that’s not strange. “There’s no typical interview length.”

And then there’s Henry Hockeimer, a Philadelphia-based defense lawyer who, like Thomas, is a former federal prosecutor.

“Secretary Clinton’s consistent position is that she did not intentionally violate any laws in using a private server, so that position combined with the fact she’s running for president certainly warranted her voluntarily meeting with the agents,” he told LawNewz.com in an email. “If she hadn’t, too many bad inferences could have been drawn.”

“They’d likely want her knowledge concerning the history of the use of the server, and they probably had a bunch of emails to show her,” Hockeimer said. “And accommodating the interview on a Saturday is not uncommon in a case that is politically sensitive.”

Clinton’s talk with the FBI comes shortly after a controversial interaction between Clinton’s husband, former President Bill Clinton, and U.S. Attorney General Loretta Lynch. The meet-up got a lot of attention since Lynch’s Department of Justice has authority over the FBI. In an interview on Friday, she dismissed concerns about impropriety, but LawNewz.com columnist Chris White said she should recuse herself from involvement since there is at least the appearance of a conflict of interest. Lynch, however, promises to accept whatever the FBI recommends.

News of Clinton’s email use broke in March, 2015. She sent work-related documents through a private server. This led to an ongoing, politically charged controversy.

Rachel Stockman contributed to this article.
–