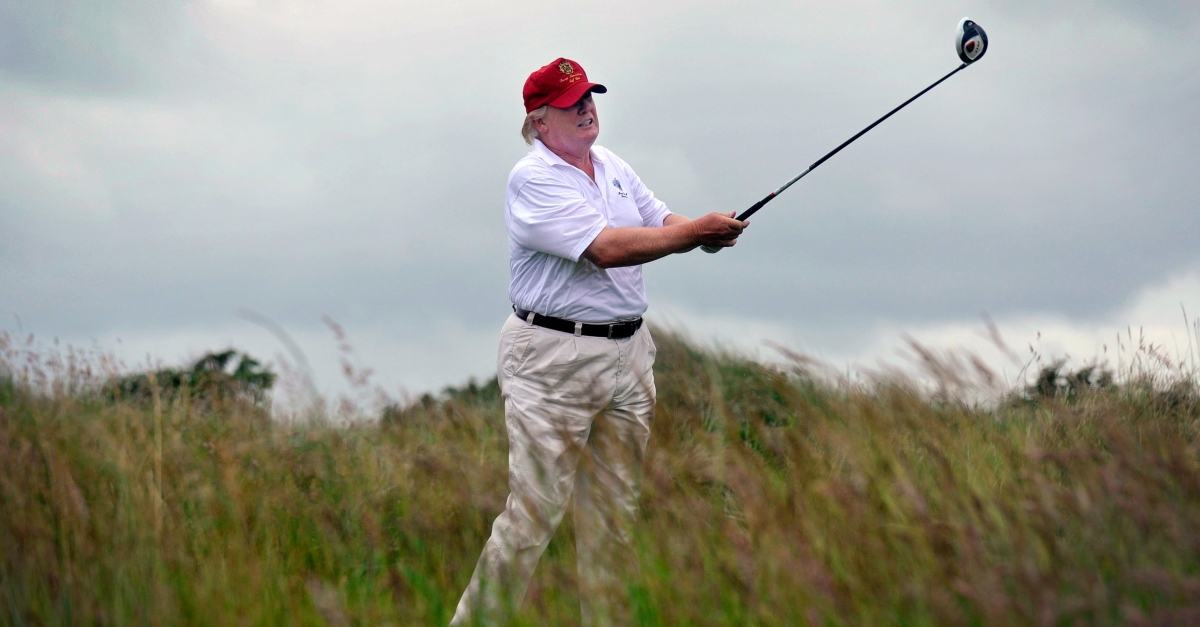 Ethics experts criticized President Donald Trump this weekend for promoting one of his privately owned Scottish golf courses. This might be why he did it in the first place:

So this explains Trump’s golf course tweet yesterday. He was threatening the UK government with harm to the US-UK relationship if he is forced to pay the Scottish government’s legal costs in litigation Trump started & lost https://t.co/0EWiluExDJ

The resort in question, the Trump International Golf Club Scotland Ltd in Aberdeenshire, was recently ordered to pay the Scottish government for legal fees incurred in a court battle after Trump lost a lawsuit to stop the construction of a nearby wind farm. The White House did not immediately respond to a Law&Crime request for comment.

It’s in this context that Trump quote-tweeted The Trump Organization promotion of the location, and tried to tie it into the broader relationship between the United States and the United Kingdom.

Trump purchased the land in 2005, but the project under-performed, even losing money amid friction with neighbors, according to a Bloomberg report in 2018.

Some critics were displeased to see the president mention his resort on Twitter. From Walter Shaub, former Director of the Office of Government Ethics:

Think about this tweet. How could the personal property of the President further relations between two countries? His statement is meaningless unless he wants foreign governments to know the key to a good relationship with America is to further its President’s personal interests. https://t.co/3Gce7RGEYW

He’s now with Citizens for Responsibility an Ethics, a non-profit that often files complaints regarding alleged wrongdoing by Trump administration officials.

There it is. The president is using an official statement as an ad for his business and making sure everyone knows he ties his business to US relationships with foreign countries. https://t.co/aKWQwx856g

There was also Brianne Gorod, chief counsel at the progressive Constitutional Accountability Center.

The Framers adopted the Foreign Emoluments Clause because they were deeply concerned that the nation’s leaders might put their financial self-interest above the national interest. https://t.co/P5gxRtqPKq