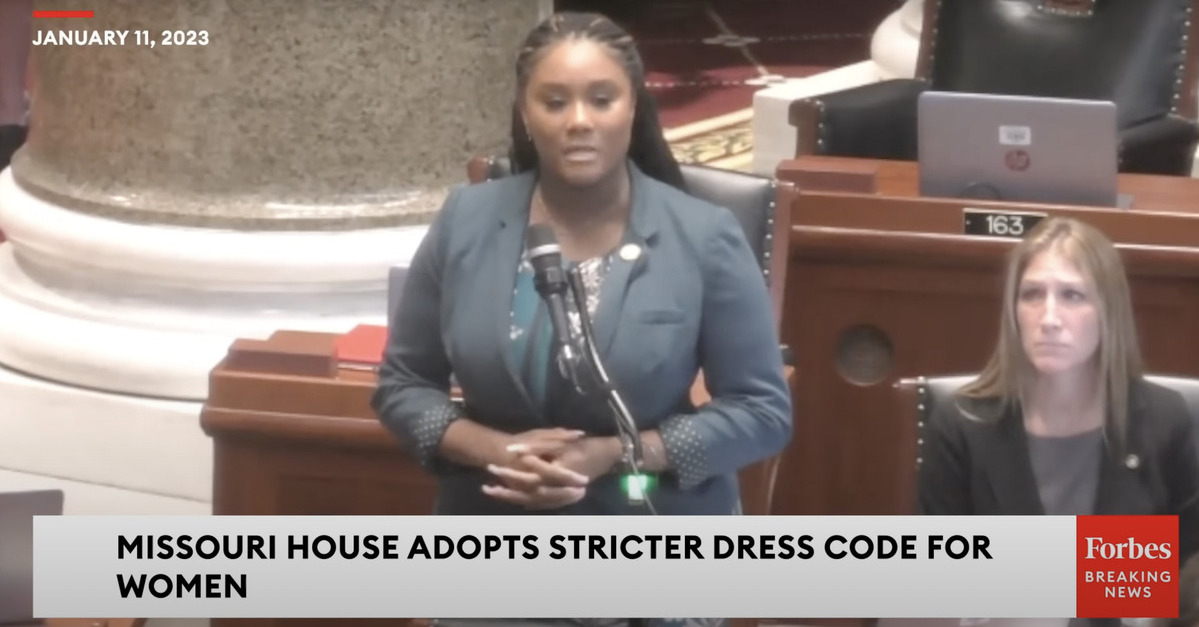 The new, stricter, women’s dress code — dubbed #Sweatergate by Missouri Democrats — is continuing to draw uproar since it passed by a vote of 105-51 on Wednesday.

The new rules adopted by the Republican-majority Missouri State House of Representatives mandates that female legislators and staffers wear “business attire, including jackets worn with dresses, skirts, or slacks, and dress shoes or boots.” It goes on to define that, “For the purposes of this rule, ‘jacket’ shall include blazers, cardigans, and knit blazers.”

Before the change, women were permitted to wear “dresses or skirts or slacks worn with a blazer or sweater and appropriate dress shoes or boots.”

The dress code for men did not change: It also calls for “business attire,” which requires men to wear a “coat, tie, dress trousers, and dress shoes or boots.”

Rep. Ann Kelley (R-Lamar) said the amendment was about “respect” and that she was “compelled” to offer it in order to “preserve the formal decorum in the chamber” — and clarify the former standards. Kelly said that men are required to wear a jacket, shirt, and tie, and that the policy should be “mirrored” for women.

“We are so interested in being equal,” Kelly said, in defense of the policy on the legislative floor.

Democrat Raychel Proudie (D-Ferguson), however, strongly disagreed. She lambasted the measure in a prolonged argument session in which she asked whether the “lapel police” would need to enforce the new rules.

Proudie warned that “making rules so petty will lead to disenfranchisement of some folks,” and questioned fellow lawmakers about the differences between jackets, blazers, and cardigans, ostensibly to demonstrate lawmakers’ lack of expertise in relevant fashion terms.

Proudie then moved on to making a broader point about women’s rights generally. Although she did not explicitly say so, Proudie drew a kind of parallel between the dress code and Missouri’s abortion ban. She said:

There are some very serious things that are in this rule package that I think we should be debating. But instead, we are fighting again for women’s right to choose something, and this time it’s whether she covers herself in the interpretation of someone who has no background in fashion.

As an example of those who would be disadvantaged, Proudie said, “they don’t make jackets or blazers for women that are pregnant,” pointing out the irony of the requirement, “particularly in a pro-life state.” She later said, “Congratulations for any of us who may be with child, and you surely don’t have the money on the salary we make to buy a bunch of new clothes.” “I hope you continue to be able to wear your cardigan,” she said.

Some proponents have defended the new women’s dress code they say makes the rules no stricter for women than those already in place for men. To counter this narrative, Proudie used Missouri’s own logic in response.

“We are not men,” Proudie said. “We’ve made that clear in Missouri. Us trying to mirror men’s clothing would kind of be contrary to conservative values wouldn’t you think?” Proudie asked, as she questioned Minority Whip Ashley Aune (D-Kansas City).

Missouri does not protect individuals from discrimination based on sexual orientation or gender identity.

Aune acknowledged the reference, responding: “My understanding is that conservatives prefer women to be women, and that involves dresses and skirts and pregnancy.”

Aune later asked the rule’s sponsor, “You know what it feels like to have a bunch of men in this room looking at your top trying to decide whether it’s appropriate or not?”

After the new policy was adopted, Proudie took to Twitter to provide some backstory to the wardrobe controversy. “I personally asked Rep. Kelley to explain what she meant prior to gaveling in for session. SHE said SHE felt they were ‘unprofessional’. This has NOTHING to do with ‘clarity’ or bare arms,” Proudie wrote.

Quite specifically, she was against cardigans- particularly with buttons. I personally asked Rep. Kelley to explain what she meant prior to gaveling in for session. SHE said SHE felt they were “unprofessional”. This has NOTHING to do with “clarity” or bare arms… https://t.co/mZI3k0xMFN pic.twitter.com/becvqqJSVx

Proudie took direct aim at Kelley’s stance on cardigans during debate when she asked a fellow legislator (who wore a cardigan during the exchange) about her wardrobe habits. The legislator responded that she had been a pastor for 41 years and would regularly wear cardigans to church, despite the definition of “business formal” having changed over the years.

“It doesn’t get more formal than the Lord’s house,” remarked Proudie.

Rep. Peter Merideth (D-St. Louis) raised another point of concern via Twitter. “Yep, the caucus that lost their minds over the suggestion that they should wear masks during a pandemic to respect the safety of others is now spending its time focusing on the fine details of what women have to wear (specifically how to cover their arms) to show respect here,” Merideth wrote.

Yep, the caucus that lost their minds over the suggestion that they should wear masks during a pandemic to respect the safety of others is now spending its time focusing on the fine details of what women have to wear (specifically how to cover their arms) to show respect here.

Throughout the pandemic, Missouri’s Republican lawmakers were vocally opposed to mask mandates used to stop the spread of COVID-19.

Wardrobe choices in government buildings are protected by the First Amendment as free expression, so long as they do not illegally discriminate. Because dress codes are typically more restrictive for women than for men, they often give rise to controversy. Legally, there is no requirement that dress codes be identical for men and women, but rather, that they are not significantly more burdensome on one gender.

The law of dress codes may come before the Supreme Court soon. In the lawsuit, three parents of students at a K-8 public charter school sued over a dress code that required girls to wear a skirt, short, or jumper to school. The school argues that the requirement promotes “classical, traditional-values-based education,” while the parents say it promotes “archaic sex role stereotypes” and restricts girls’ movement. The justices have not yet decided whether to take up the case, but ordered the Biden administration to weigh in on its choice just days before the Missouri sweater showdown.

You can watch the full debate over the Missouri dress code here.