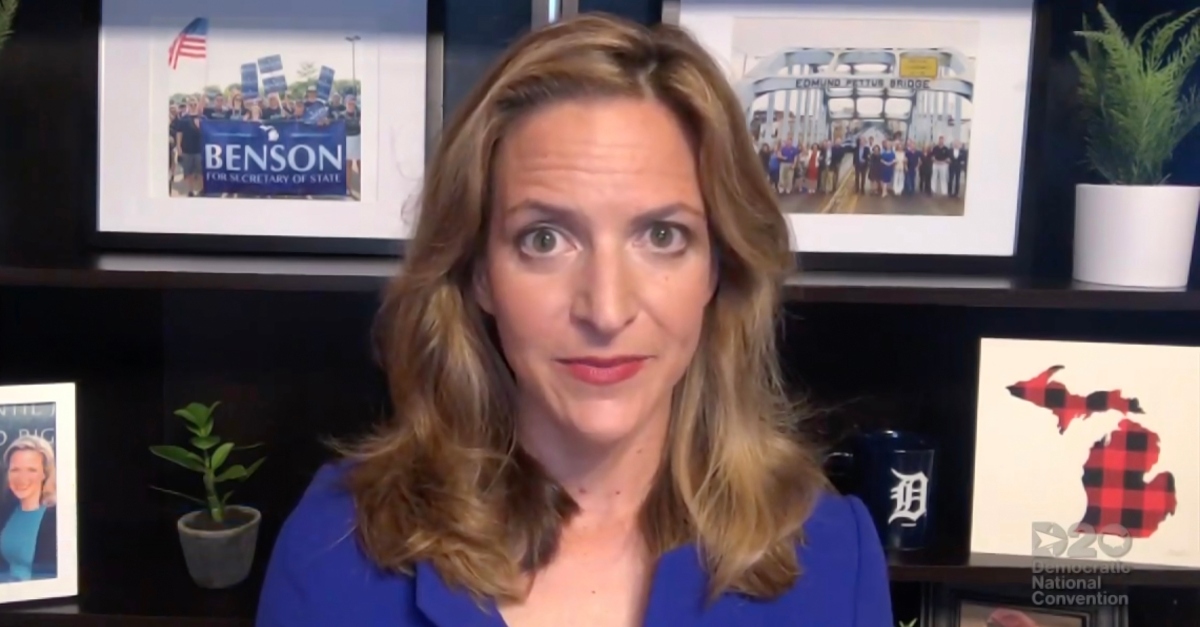 The Michigan Secretary of State says that she and her family faced harassment this weekend over the results of the 2020 presidential election.

“As my four-year-old son and I were finishing up decorating the house for Christmas on Saturday night, and he was about to sit down to watch How the Grinch Stole Christmas, dozens of armed individuals stood outside my home shouting obscenities and chanting into bullhorns in the dark of night,” Jocelyn Benson (D) said in a statement on Sunday night. “I have always been an energetic advocate for the right and importance of peaceful protests as enshrined in the United States Constitution, however there is a line crossed when gatherings are done with the primary purpose of intimidation of public officials who are carrying out the oath of office they solemnly took as elected officials.”

The individuals gathered outside my home targeted me as Michigan’s Chief Election officer. But their threats were actually aimed at the 5.5million Michigan citizens who voted in this fall’s election, seeking to overturn their will. They will not succeed in doing so. My statement: pic.twitter.com/RSUnPSN4Aa

President-elect Joe Biden defeated incumbent Donald Trump in the 2020 election. Michigan, which sided with Trump in 2016, flipped to the challenger, and granted him a not inconsiderable 16 Electoral College votes. Trump does not admit that he lost, simply repeating unsubstantiated claims of voter fraud, and sending his attorneys out for heretofore fruitless court battles.

“Through blatantly false press releases, purely political legislative hearings, bogus legal claims and so called ‘affidavits’ that fail to allege any clear or cogent evidence of wrongdoing, those unhappy with the results of this election have perpetuated an unprecedented, dangerous, egregious campaign to erode the public’s confidence in the results of one of the most secure, accessible and transparent elections in our state’s history,” she said.

Benson described the demands outside her home as “unambiguous, loud and threatening.”

“They shouted baseless conspiracy theories about the election, and in videos uploaded to social media, at least one individual could be heard shouting ‘you’re murderers’ within earshot of her child’s bedroom. This mob-like behavior is an affront to basic morality and decency.”

Before the election, several members of a purported “militia” group were accused of plotting to kidnap Gov. Gretchen Whitmer (D).

[Image via DNCC via Getty Images]