Conservative attorney George Conway wouldn’t be the first husband to talk smack about his wife’s boss. He might be the first to publicly oppose that boss running for a second presidential term.

If you agree, too, then go to https://t.co/wTewmQ358N and give what you can. This is about one thing, and one thing only—dispatching @realDonaldTrump to the trash bin of history, where he rightfully belongs. https://t.co/bBsxdEKj9R

He’s actively supporting former congressman Joe Walsh in running against President Donald Trump in the Republican primary for the 2020 election.

You may recall that Mr. Conway is married to Kellyanne Conway, senior counselor and former campaign manager to President Donald Trump. We’re hard pressed to think of a Trump surrogate more publicly ride-or-die than her. So, yeah, it stands out when her husband– who worked against Democratic President Bill Clinton in the 1990s–calls her boss a rapist, moron, and narcissist. Whew! Kellyanne Conway pretty side-steps talking about her husband’s criticism.

Personal dynamic aside, it shows George Conway getting involved in an substantive attempt to pry Trump out of office. He didn’t immediately respond to a Law&Crime request for comment.

Walsh formally announced his candidacy on Sunday, but The New York Times reported on Friday that according to sources, he asked Conway to join his campaign in a “leading formal role.”

“I think Walsh’s plan to attack Trump for his dishonesty, amorality, instability and incompetence is absolutely the right approach, and I’ll do whatever I can to help,” Conway said. He declined to announced if he would join the Walsh campaign in a formal role.

It’s worth mentioning that shortly after this morning’s Walsh tweet, Conway retweeted an ABC article about former Massachusetts Gov. and Libertarian vice presidential candidate Bill Weld, who is also running against Trump for the GOP 2020 nomination. 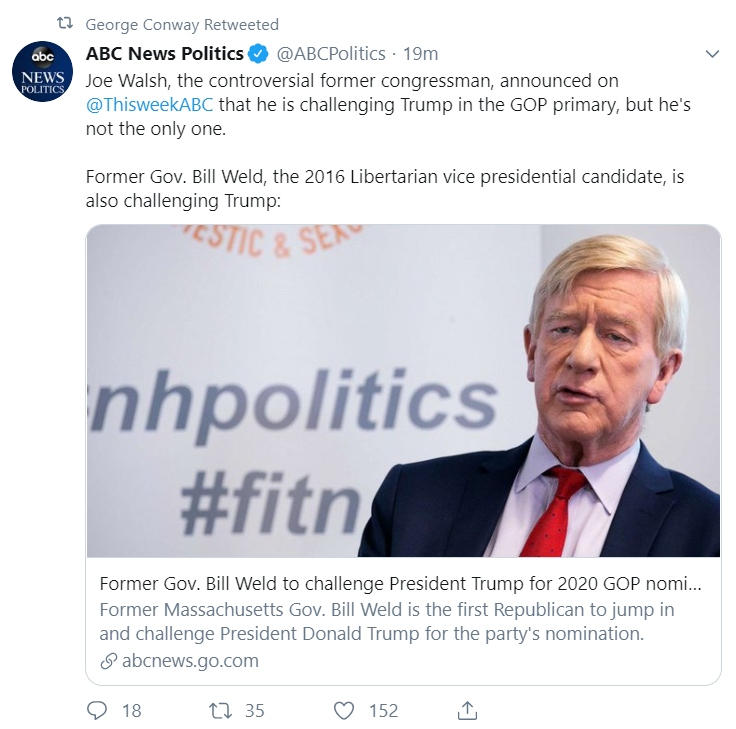 Replacing Trump as GOP nominee is a tall order. The president’s approval ratings among Republicans is at 88 percent as of early August, according to Gallup.

ABC host George Stephanopoulos challenged Walsh, a conservative hardliner who served for one term in Illinois’ 8th district, on the new candidate’s past “textbook racism and sexism.”

“The beauty of what President Trump has done is, George, he’s made me reflect on some of the things that I’ve said in the past,” Walsh said.