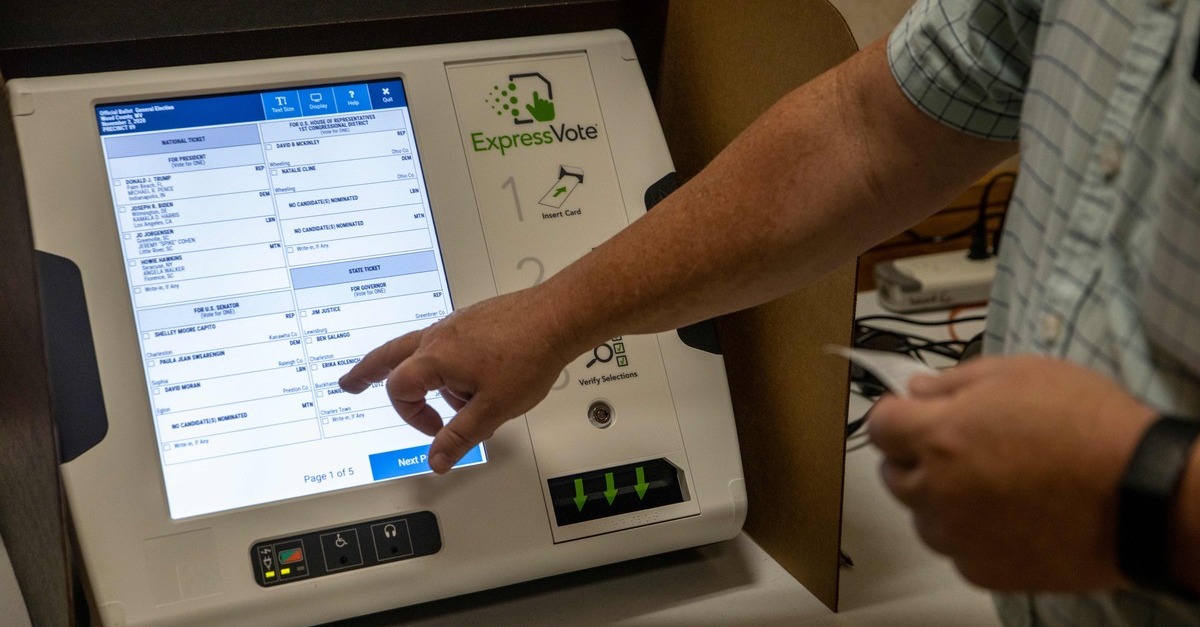 A federal appellate court in Richmond, Va. ruled in favor of West Virginia’s ballot-order statute on Wednesday in a blow to Democratic Party plaintiffs who say the rule violates the First and 14th Amendments.

The law in question organizes election ballots for state and federal elections by listing candidates in the order of which party received the most votes in West Virginia during the last presidential election.

The statute itself reads:

The party whose candidate for president received the highest number of votes at the last preceding presidential election is to be placed in the left, or first column, row or page, as is appropriate to the voting system. The party which received the second highest vote is to be next and so on. Any groups or third parties which did not have a candidate for president on the ballot in the previous presidential election are to be placed in the sequence in which the final certificates of nomination by petition were filed.

So, for example, because Donald Trump won the most votes during the 2020 election in the Mountain State, all Republican candidates will be listed first before any other party’s candidates for all forthcoming elections up to and including when the process repeats in 2024.

“This is no mere election administration detail,” the Democratic Party plaintiffs wrote in their original petition filed in late 2019. “It is a fact almost universally acknowledged that the candidates listed first in a race on the ballot receive an electoral benefit solely due to their ballot position. Academics have concluded this again and again, as have federal and state courts. It is the inevitable result of a phenomenon known as the ‘primacy effect.’ And it gives first-listed candidates a meaningful and arbitrary advantage over all of their opponents.”

Circuit Judge Barbara Milano Keenan explains the complaint in constitutional terms: “The plaintiffs contend that because candidates appearing first on the ballot ‘almost always’ receive an increased vote share based solely on this priority status, this system favors candidates based on their political affiliation and violates the plaintiffs’ rights under the First and Fourteenth Amendments.”

The opinion goes on to detail those claims:

The plaintiffs contended that the statute unduly burdens both the individual and organizational-member plaintiffs’ right to vote, in violation of the First and Fourteenth Amendments, by decreasing the impact of their votes and by making it more difficult to elect Democratic Party candidates who disproportionately have been placed in a disfavored position on the ballot. The plaintiffs also alleged that the statute violates their rights under the Equal Protection Clause of the Fourteenth Amendment, because the statute treats candidates differently based on their partisan affiliation and gives the favored party “an unfair and arbitrary electoral advantage.”

In August 2020, U.S. District Judge Robert C. Chambers agreed with the Democratic Party plaintiffs and issued “a permanent injunction prohibiting enforcement of the Ballot Order Statute” that did not require West Virginia “to adopt a particular alternative.”

Instrumental in that decision vindicating the Democrats was the testimony of Dr. Jon A Krosnick, who said that the ballot-order statute added an average of nearly 3 percentage points to the party benefitted by the law. Such bonus votes, Krosnick said, “would likely” have flipped some 100 races over the past 60-plus years.

The Fourth Circuit stayed the injunction because of the fast-approaching nature of the 2020 presidential election. Wednesday’s decision formally vacates the district court’s earlier decision and hands the West Virginia defendants a victory on the merits.

In disagreeing with the district court and the Democrats, the two-judge majority (both of whom were appointed by Barack Obama) heavily cited a 2016 case from the same circuit which contained similar facts. That case was launched by the Libertarian Party against James B. Alcorn, a member of the Virginia Board of Elections.

“We emphasized that when a statute is neutral in its application, ‘[a]ccess to a preferred position on the ballot so that one has an equal chance of attracting the windfall vote is not a constitutional concern,'” Circuit Judge Keenan noted. “Although this language did not ultimately form the basis for the Court’s holding in Alcorn, it nonetheless is persuasive in our consideration of the factual circumstances of the present case.”

We concluded that, among other reasons, the state’s interests in reducing voter confusion and in listing partisan candidates for offices by political party (party-order symmetry) justified “the most modest burdens” on the plaintiffs’ rights. Accordingly, we concluded that the plaintiffs had failed to state a claim that the Virginia statute was unconstitutional.

Our decision in Alcorn made plain that regardless whether the plaintiffs could demonstrate “the exact degree of positional bias” caused by Virginia’s statute, this type of bias resulting from ballot-order placement placed a lesser burden on the plaintiffs’ rights under the First and Fourteenth Amendments than other sorts of ballot-related concerns.

“Here, the plaintiffs presently are denied their preferred method of ballot ordering and will be subject to the detriment of the primacy effect until at least the year after the next presidential election,” the court ruled. “While we have concluded for standing purposes that the plaintiffs alleged a substantial risk of injury based on the primacy effect, any burden imposed by the statute is not elevated from a ‘modest’ to a ‘significant’ burden even under Dr. Krosnick’s quantification of the primacy effect.”

Writing in dissent, Obama-appointed Judge James A. Wynn, Jr. excoriated his colleagues for underselling the nature of the advantage due to the primacy effect [emphasis in original]:

This windfall is “frequently outcome-determinative and has a dramatic aggregate effect on West Virginia’s political landscape”—Dr. Krosnick identified at least 105 races, and probably more, in West Virginia between 1960 and 2018 whose results “would likely have changed if the order of major-party candidates had been flipped.” Those elections included significant state-wide races, including those for President, U.S. Senator, U.S. Representative, Secretary of State, and Attorney General. And they also included make-or-break contests for control of the state legislature. Nothing to scoff at.