Experts Arguing That Trump Broke Georgia Law, Which He Cannot Self-Pardon For 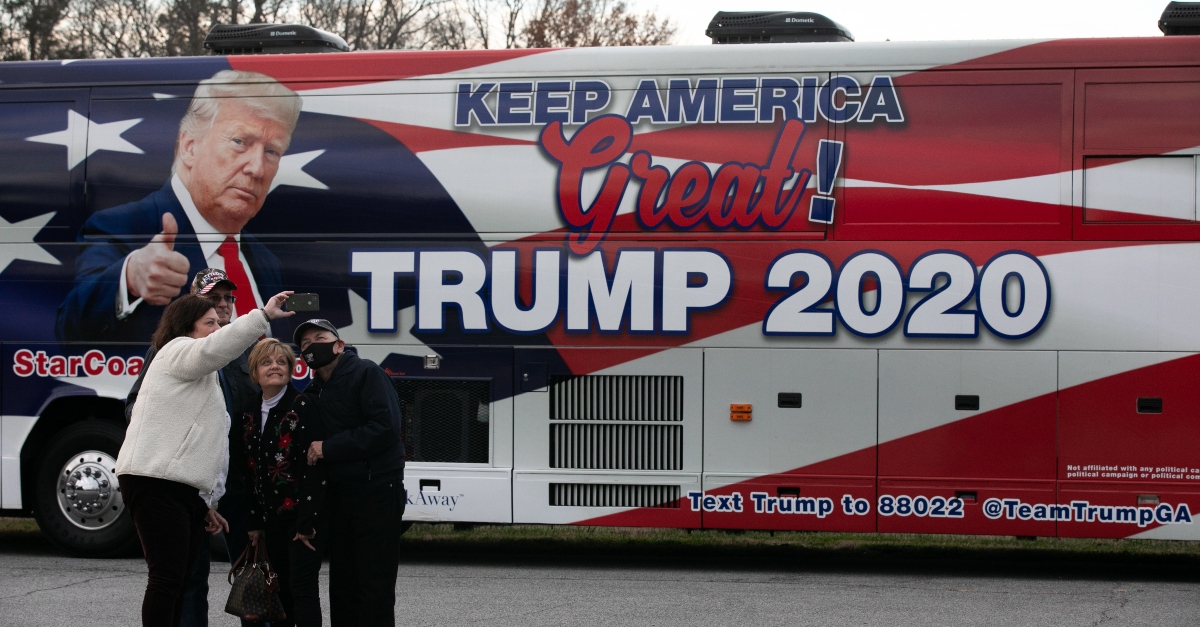 Did President Donald Trump break the law in asking Georgia Secretary of State Brad Raffensperger (R) to “find” votes on his behalf in the 2020 election? It is just under 17 full days until President-elect Joe Biden gets sworn into office, but that is more than enough time for the incumbent to try and pardon himself (as some of his allies have urged him to do before).

The current dialogue about presidential self–pardon stretches back to even before the current administration. One thing is 100-percent clear, however: This federal pardon power does not touch state criminal offenses. That is definitely something to think about, as some legal experts are arguing that POTUS’s phone call not only broke federal law, but also state law (it is unclear if there will actually be investigations of this conduct; other legal experts have said this would be hard to prosecute).

GA Code 21-2-586
(b) If the Sec of State or any employee willfully destroys, alters, or permits to be destroyed or altered any document described in subsection a… the Secretary of State or employee of his or her office shall be guilty of a felony.https://t.co/rIuQE3CNPs

Between that and “we need” the number of votes Biden won by plus one is just an astonishing demand. There’s no way to read this other than a blatant attempt to pressure Georgia officials to lie and alter legitimate election results with a wink and a nod to a looming consequence.

Kreis told Politico that Georgia law says “anybody who solicits, requests or commands or otherwise attempts to encourage somebody to commit election fraud is guilty of solicitation of election fraud. ‘Soliciting or requesting’ is the key language.”

“The president asked, in no uncertain terms, the secretary of state to invent votes, to create votes that were not there. Not only did he ask for that in terms of just overturning the specific margin that Joe Biden won by, but then said we needed one additional vote to secure victory in Georgia,” Kreis said.

The professor then wondered why Trump, given that the presidential pardon power does not extend to state crimes, would behave the way he did as his term in office winds down: “If I’m the president of the United States and my pardon power is not — does not extend to state acts, I don’t think that in the last few days of my term that I would want to be engaging in activities that even remotely subject me to the possibility of state criminal prosecution.”

Trump’s statement shows he knows what the law is and he is doing precisely what it forbids: seeking to cause submission of false election results – and threatening folks to do that, to boot. Federal and state crimes. https://t.co/jKoh7xAdiV

Self-pardons are an entirely different, more complicated, and never litigated issue, though many legal scholars seem to think a self-pardon would be unconstitutional. Writing in context of the Russia probe, attorney and Law&Crime analyst Elura Nanos argued in 2017 that Trump can likely issue a self-pardon because in Article II, Section 2 of the U.S. Constitution, the “only limits placed on the power are that pardons may only be issued for federal offenses (not civil or state crimes), and a pardon cannot override the Congress’ impeachment power.” She stood by that analysis when we reached out to her on Sunday, though she pointed out an important element in this case.

“Keep in mind that the one issue is that if criminal charges were never actually brought, the timing of a preemptive pardon might be problematic,” she told us.

As she wrote in her 2017 op-ed, President Gerald Ford’s pardon of predecessor Richard Nixon was controversial because it was preemptive, and the legal question underlying this remains untested. From her article:

A blanket absolution for all offenses that stymies a prosecution before it even happens? That’s got “Trump” written all over it. Ford’s pardon of Nixon wasn’t without it’s own controversy, as some legal scholars argued that its preemptive nature exceeded the bounds of Ford’s constitutional authority. Others raised the counterargument that that pardons are properly timed so long as they are issued after the commission of a crime – not necessarily after the proof at trial of that crime. Both arguments make some sense, and neither has been tested, so it’s tough to say what would happen if the issue were raised in court by the Trump administration or its opponents.

Harvard Law professor emeritus Laurence Tribe, noting the pardon power does not extend to state crimes, argued a self-pardon could not be pulled off.

So Donald Trump has committed a serious crime in Georgia that wouldn’t be washed away even by a presidential self-pardon if such a thing could be pulled off — which it can’t. https://t.co/sj0RlHbYRX