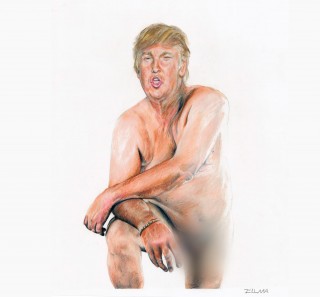 California-based artist, Illma Gore, has gotten quite a bit of attention after painting Republican presidential front runner Donald Trump in the nude with a very, very, small penis. Gore told LawNewz.com she’s received nasty threats from Trump supporters, and this week she says Trump’s team even told her she would be getting a cease and desist letter in the mail.  Gore says the painting, which is titled Make America Great Again, was not even meant as a political statement per se.

“The idea was to invoke a reaction from audience to inspire discussion about what is in our pants…our physical being,” she told LawNewz.com.

But here’s the more interesting legal part of this story that hasn’t really been covered, and potentially impacts the millions of people who share their work on Facebook everyday.  Since she posted the picture on Facebook, she’s had issues with the social networking site shutting down her account. At first, she got a notice the nude picture violated their terms of service. Then, in March, Gore received a Digital Millennium Copyright Act notice (DMCA) from Facebook asking her to take the picture down.  Okay, so you might be asking the following: how did she infringe on someone’s rights if she was the one who painted the picture? And secondly, does a nude painting really violate Facebook’s policies since it’s artistic expression?

The answer is she didn’t and it doesn’t. Facebook told LawNewz.com that both the terms of service violation and the DMCA notice were issued in error. Perhaps other users complained about the nudity, and Facebook jumped the gun and triggered some kind of internal process. Facebook wouldn’t detail how exactly this ‘error’ happened.

Because her post went viral, Gore was able to get the attention of Lee Rowland, a senior staff attorney at the American Civil Liberties Union, who is representing Gore in this case. Rowland says she had very productive conversations with Facebook and everything was eventually straightened out. But, let’s be honest, not everybody paints a picture of Donald Trump’s (hypothetical?) penis and gets the attention of the nation and Facebook executives. Apparently, lots of users find themselves unexpectedly in the crosshairs of Facebook’s policies and the DMCA process. For example, last year, the social networking site censored a New York art critic after he posted some “offensive” medieval paintings. The Washington Post reported that even organizations like the New York Academy of Art and the Centre Pompidou have been censored. These places have lawyers, and highly connected benefactors. How’s the ordinary person supposed to navigate this (apparently somewhat common) predicament?

“It’s a problem that there isn’t greater transparency about what would trigger censorship under Facebook policies,” Rowland told LawNewz.com. “Illma found herself in the netherworld of social media, she didn’t even know who to call at Facebook,” Rowland said.

Gore said she grew very frustrated trying to communicate with Facebook about her art until getting the ACLU involved.

“Facebook is being ridiculous. They are the last people I think I would make enemies with. It was heartbreaking from an artists point of view,” Gore told LawNewz.com.

DMCA states that while outlets like Facebook are not liable for copyright infringement, they have a duty to remove the materials that appear to infringe on another author’s copyrights after giving notice.

According to Facebook’s policy on DMCA,  people who believe another user has violated their rights can file a claim with them. The forms asks for contact information, the name of person who owns the right in question, a description of the copyright infringement, and a declaration that the person is not committing perjury by filing the claim. Facebook also requires a electronic signature. Seems pretty easy, no?

“The DMCA take down process is very ripe for for abuse,” Rowland said, “It often results in censorship unless somebody has the ability to fight somebody else in court.”

Not only that, there is also concern about what safeguards Facebook has in place to prevent anyone from filing a claim, and essentially censoring other users unjustifiably. In fact, the Electronic Frontier Foundation has documented all sorts of abuses with this process (not just by users on Facebook but on all social media platforms).

“The DMCA has become a serious threat that jeopardizes fair use impedes competition and innovation chills free expression and scientific research and interferes with computer intrusion laws,” the organization believes. Facebook says they have a dedicated team that uses specialized tools to prevent abuses. They also have a process where you can file a DMCA counter-notification, if you think your picture was unfairly targeted. But, apparently, some false claims are still making it through the process.

Facebook’s nudity policy  doesn’t include “photographs of paintings, sculptures, and other art that depicts nude figures.”  Ms. Gore’s painting clearly fell into Facebook’s exception, however, it was mistakenly removed anyway, and the DMCA notice was issued. There is no doubt that Facebook is working hard to prevent issues like this. The site, like so many others, is in a difficult position. They must balance the growing outcry over offensive material, and the need to keep the platform as a way that users can freely share pictures, art, and content.  However, this case demonstrates that there is more work to be done.

“As more and more of our speech migrates online, it is all the more important for companies that offer themselves as a platform for speech to be transparent and accountable about their take down policies,” Rowland said.