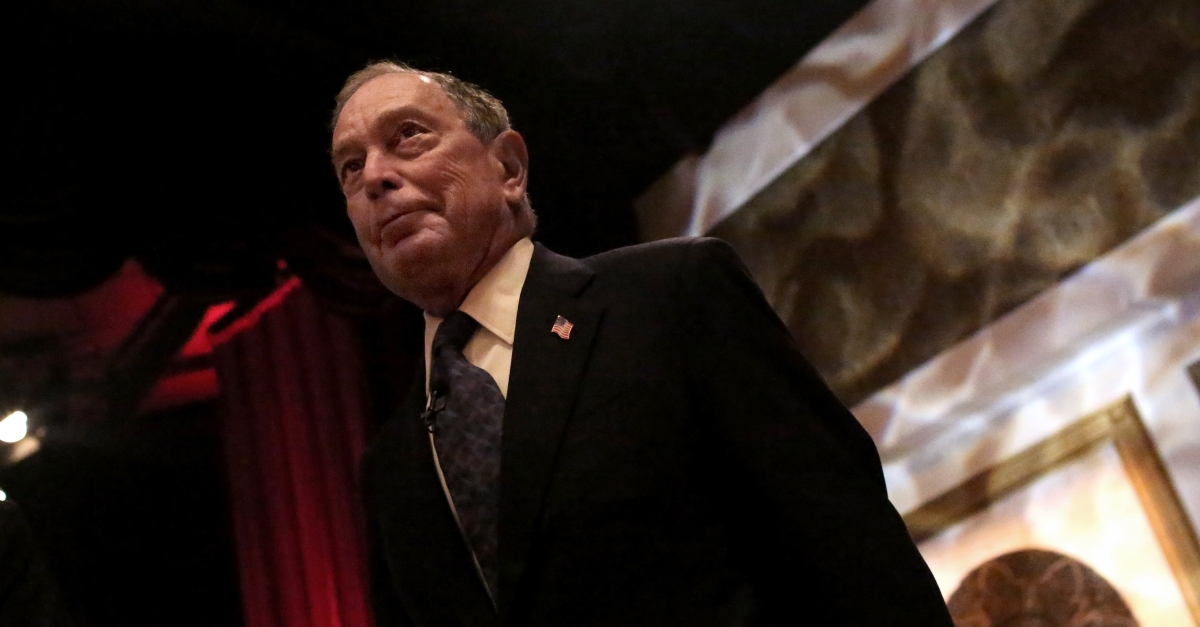 Former New York City mayor Michael Bloomberg might be running for the presidency, and in a remarkable speech Sunday, apologized Sunday for the controversial stop-and-frisk policy. How did it play among pundits, journalists, and critics? Not well. At best, they point out that this is a sudden reversal from the 77-year-old billionaire politician, after he spent years defending the practice. At worst, they suggest he’s angling for votes, especially from black people. Bloomberg, a lifelong Democrat who became NYC mayor as a Republican and later became an Independent, would run for president as a Dem.

MSNBC legal analyst Maya Wiley and Above the Law executive editor Elie Mystal pointed out that Bloomberg defended the practice as recently as this year.

A reminder that as tecently as Jan 2019, #Bloomberg was defending #StopAndFrisk despite #NYC crime remaining low since we ended the policy. Now we must continue to police the practice. Still too many ppl of color told they “match the description.” https://t.co/cY21fX3uxH

“I think it’s also true that most police departments around the world do the same thing,” he said the United States Naval Academy’s 2019 Leadership Conference. “They just don’t report it or use the terminology.”

Bloomberg denied that New York police picked out people based on race, though the practice was known for disproportionately affecting black and Hispanic communities.

Now the former mayor is apologizing for the practice, said that he “didn’t understand back then the full impact that stops were having on the black and Latino communities,” and voiced hope that he could earn back trust.

“I was wrong, and I am sorry,” he said Sunday at the Christian Cultural Center in Blooklyn, according to The New York Times. He acknowledged that “far too many innocent people were being stopped.”

Civil rights leader and MSNBC host Al Sharpton said he spoke to Bloomberg after the speech. He stated that people should at least hear Bloomberg out if the former mayor runs for president.

“He called me right after the statement,” Sharpton said. “My position is, clearly, it’s going to take more than one speech for people to forgive and forget. He’s right. He’s gonna to earn it, but I think that we at the same time have to hear him out if he runs, just like we’re hearing out Joe Biden, who authored the crime bill that incarcerated a lot of blacks disproportionately, and Bernie Sanders, who voted for it.”

Here are other responses to Bloomberg’s reversal.

Oh, now @MikeBloomberg apologizes. For years, he has defended ”stop-and-frisk,” the racially discriminatory and ineffective police tactic that he backed and expanded as NYC’s mayor. Now that he is running for president and needs black votes, he’s sorry. https://t.co/Sgf6RlXwCx

Bloomberg has fought apologizing for Stop and Frisk/acknowledging the negative effects for years. On the even of a presidential run, he’s apologizing for it. https://t.co/8v7rpYmRCb

I worked in local news while @MikeBloomberg was mayor. It’s hard to overstate how controversial this policy was. Lots of NYers thought it was racist. It led to a lot of tension between the NYPD and communities of color. And Bloomberg had been defending it – until now. https://t.co/NuX3FbWUKA

And just to clarify & remind what Bloomberg’s “Stop & Frisk” really means to the victims of it. It’s traumatizing. Insulting. Violent. Terrifying. Makes people feel perpetually imprisoned in their own neighborhood. https://t.co/bmikZKZ3FJ

“sorry my guys were randomly touching your balls for fun a few years ago. sucks i can’t do anything about it. hate to see it” – mike bloomberg